The Western Branch girls looked far from experiencing a "down" year for their program as the Lady Bruins won the last Eastern Region girls indoor track & field team title by 40 points as they were able to amass a total of 80 points over the two day meet held at the Boo Williams Sportsplex in Hampton this past weekend. Milan Parks and their hurdle crew led the charge for Western Branch to maintain their regional supremacy. 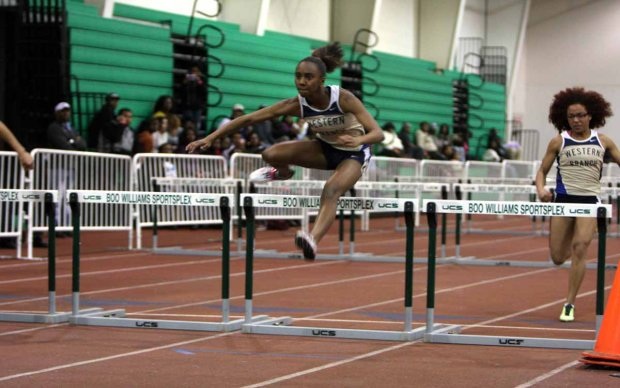 The sophomore Parks scored 23 points individually include a long jump title with her US #8 mark of 19'1.25" on Saturday. On the day prior in the 55 meter hurdles finals, Parks was the regional runner-up with a 8.29 clocking as returning 300 meter hurdles state champ Heather Smith of Great Bridge took the event in 8.21. Top seed and state champion hurdler Chantel Ray of Hampton did not show for the finals after a 8.04 performance in the preliminary round. Western Branch took three of the top four places in the finals with Parks (2nd, 8.29), Irielle Little (3rd, 8.52), and Devin Heath (4th, 8.73) all running well under 9 seconds to pick 18 points total for their team in the race.

Western Branch got another 10 points from the triple jump between a third place finish from Funyalo Oluwole (36'4") and fourth place showing from Parks (36'0"). The next highest individual finishers for the squad beyond long jump winner Parks was Jewel Smith clearing 5'2" for second place in the high jump and Ebony White (1:16.56) in the girls 500 running an exceptional race to press Indian River's Andrea Wright (1:15.92). Wright's time will move her into the fast section of the 500 meter dash at the AAA State Meet with three others who have broken 1:16 this winter in the event. 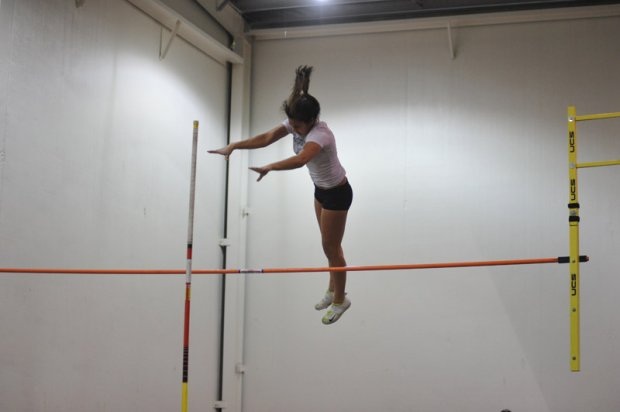 Beach District schools First Colonial and Kellam tied for team runner-up honors with 40 points each. First Colonial had the only female meet record performer of the meet in Jacqueline Meeks who bettered her own record of 10'10" from one year ago as she matched her personal best clearance of 11'6" at Boo Williams on Friday.  In the field events, First Colonial was able to gain considerable points including a runner-up finish by Briana White in the triple jump with a mark of 36'8" to Bethel's Jayme Thomas (36'10"). Bethel girls have produced many regional champs in the sprints, but far less in the jumps, so Thomas snaps a trend that she can perhaps build on as a junior. Another 6 points was added to the First Colonial team score by thrower Phontavia Sawyer in the shot put as her mark of 36'11.75" put her behind only Nansemond River sophomore Zakiya Rashid (2nd, 37'8.50") and Kempsville's Deandra Doyle (1st, 37'11"), who has bragging rights now in her household currently in winning the regional title with her brother Devontay just missing becoming one himself as a runner-up in both the 55 meter dash and long jump. 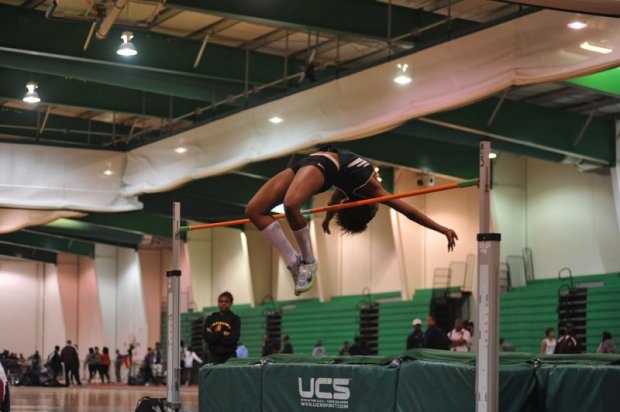 A second meet record for the girls almost was tied or broken by Cox senior Chenera Lacey who cleared 5'7" for the first time this season in the high jump to match her personal best from previous seasons and build momentum into the state meet as one of the event's top competitors. The current meet record of 5'8" by Deep Creek's Ashley Gatling was nearly matched or eclipsed by Lacey in her last height attempts. Last year's outdoor state runner-up is still seeking for her state title to accompany her regional titles.

After being defeated in two consecutive meets by Heritage's Asonya Anderson, who was finally cleared academically eligible to compete in the second half of the indoor track season, 2012 Group AAA state indoor 55 meter dash champion Carolyn Brown got her confidence back in defeating Anderson in the Eastern Region 55 meter dash finals with a 7.02 clocking. Both Anderson (2nd, 7.09) and Brown have both dipped under 7 seconds this season to join a small list of past elite high school sprinters from Virginia and the race for the state title next week seems to be down to these two Peninsula District athletes as no other sprinter has even broken 7.10 this year. 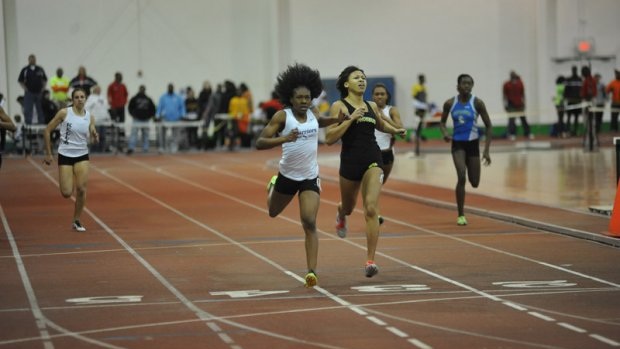 The Phoebus sophomore Brown would like not only to repeat as the 55 meter dash state champion, but showcase her improving range and win the 300 meter dash as well. She broke 40 seconds for the first time season at the regional meet in a 39.98 clocking, but another underclassmen, in fact a freshmen in Nansemond River's Brandee Johnson was a step or two ahead of her in a superb time of 39.67. Johnson's regional performances ties her with Indian River's Andrea Wright as the fastest in the state of Virginia this winter and 8th fastest in the United States. Johnson's time puts her closer to the freshmen state record in the event (39.08 by Shakeela Saunders from 2009).  With her range in the 55 meter dash (7.24) and 500 meter dash (1:18.83), Johnson has great future potential to emerge as one of the state's most dominant sprinters if she continues to develop. 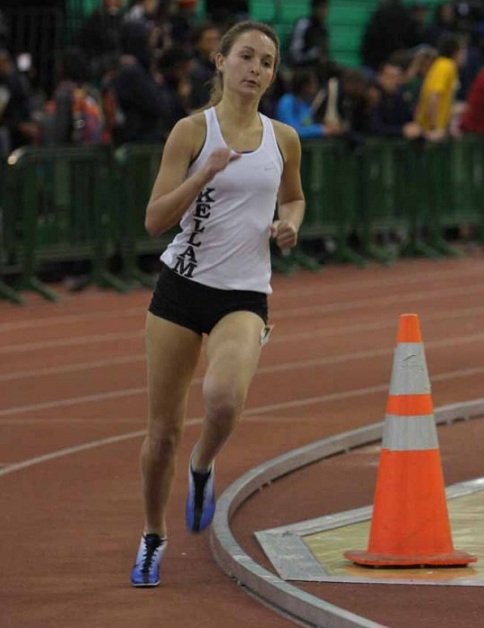 Kellam's big point push came in the distance races with two individual champions and impressive times posted by Abby Motley in the 1600 meter run and Rachel Lewis in the 1000 meter run. Motley dispatched of the competition easily in the 1600 as she put 8 seconds between her and the next finisher with a season best time of 5:04.95. It was not Motley's first regional title, but it was the first title for Lewis in a breakthrough performance to break 3 minutes in a time of 2:59.29.

Following a runner-up performance in the 1600 to Motley, Nikki Park of Ocean Lakes did not need the sub 11 minute race to win like she will need next to be All-State once again in the 3200 meter run. Park posted a time of 11:16.83 in her victory, but the runner-up race from Morgan Anderson of First Colonial might have been even more impressive as she was finishing a difficult double coming back from a second place finish in the 1000 meter run (3:03.27) with only the 300 meter dash in between as rest. 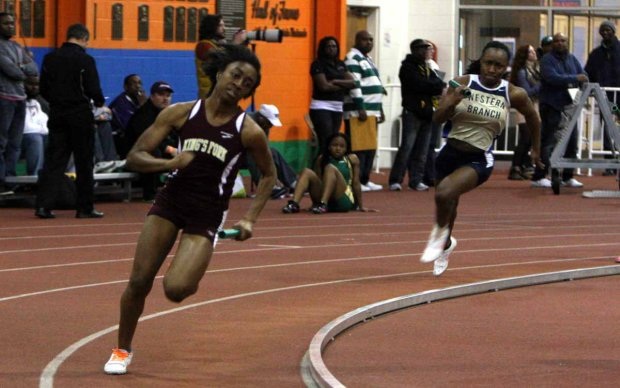 In the relays, three different schools were champions in three different events with Western Branch in the 4x800 (9:47.12), Kecoughtan in the 4x400 (4:03.8), and King's Fork in the 4x200 (1:43.84). The King's Fork girls ran a new state leading time in the 4x200 and one of the fastest times on a flat track in the nation to run away from a field featuring fast competition in Carolyn Brown and the Phoebus girls (2nd, 1:45.07) as well as Milan Parks and the Western Branch girls (3rd, 1:45.26). The Western Branch girls 4x800 helped their squad build an early meet lead after day one, while the Kecoughtan girls knocked 13 seconds off their season to win the event from the slow section and Grassfield (2nd, 4:04.04) joined them as well making it to the state meet from the first section.