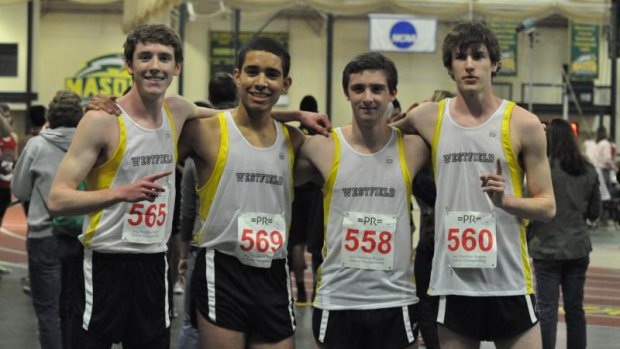 Despite Chantilly being one of the top contending teams for this year's Group AAA State indoor team title, the Westfield boys (74 1/2 pts) managed to repeat as Northern Region champions on Saturday at George Mason University by a margin of nearly 20 seconds points. Like last year's squad, the relays were the cornerstones for Westfield's team success. In the 4x800 meter relay, Westfield broke 8 minutes for the first time this season as Nathan Kiley closed the deal on anchor leg and was able to run away from some strong anchor leg's in John Stoney for Oakton (2nd, 8:02.11) and Nathan Schulte (3rd, 8:05.33). Westfield only lost one leg from last year's indoor and outdoor state champion relay, which also won the Penn Relays Championships of America title, but it was one of their top legs in Tyrone Walker. Their squad will go into the state meet as the second seed in the race behind only Atlee, who posted a 7:54 time in an outdoor polar bear meet last month.

Westfield's 4x400 meter relay performance may have been even more impressive to close the meet as they raced without one of their top quarter milers in Kiley, who was maxed out for the day after running a leg on the 4x800, winning the 500 meter dash in a personal best time of 1:04.94, and taking second in the 300 with a 35.61 clocking. Westfield was able to run away from the competition in the fast section of the 4x400 with only Max Chambers as returning leg from last year's "A" squad in a 3:26.94 victory. Chantilly tried to steal the event from the slow section in a 3:28.39 clocking with Sean McGorty running anchor leg to secure his 4x400's place in the state meet with the third fastest time overall. Centreville had an incredible anchor leg from Chase Heiner to bring them back from several places down and swing wide off the final turn to run down the fourth legs from South Lakes and McLean to put his team in second place.

Westfield also got another big 10 points from senior Haider Fradj winning the shot put competition with a throw of 51'9.50" as the only competitor in the field to go over 50 feet. 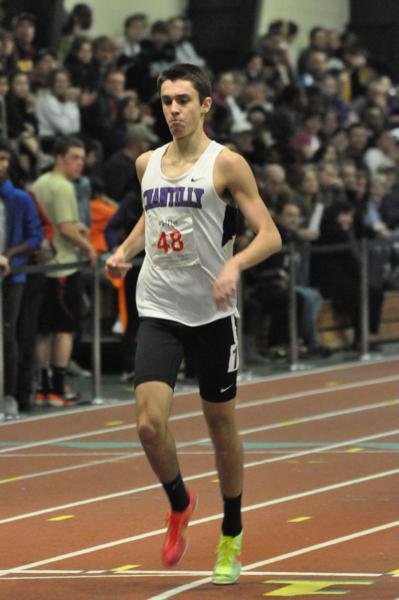 Both 4x400 anchor legs McGorty and Heiner earlier in the 1000 meter run competing in different sections had impressive time trials against the clock. Heiner had to race from a slower section of the event with his season best of 2:37 prior to this weekend, but ended up rolling a big 6 second drop in his personal best down to 2:31.48 for the Centreville junior. With 2:31 as the time to beat, McGorty could not simply cruise to win the event anymore, but was neither his original intention as he was held out of the 4x800 and 1600 earlier so he could go for a fast time in the 1000 one last time before the state meet which he expects to triple in the 4x800, 1600, and 3200. Only four runners showed up for the fast section of the event after scratches, so McGorty was almost on the track by himself for five laps. He set a hard pace and the end result for him was a VA #9 all-time 1000 meter performance of 2:28.54, which ranks him 6th in the nation this season and established a new meet record. Westfield's Maxwell Chambers did the best job in keeping McGorty in close sight as he finished 3rd overall at 2:32.23 after Heiner's time from the previous section.

McGorty's teammate and defending Group AAA state 1600 meter champion Logan Miller has never won a district title, but yet he can now add a regional title to the state indoor championship achievement from last winter. Miller, typically a sit and kick runner, decided to not wait until the final lap and 200 meters to make his move, but with 400 meters to go, moved to the front and kept it en route to a 4:21.80 win. Oakton's John Stoney ran an impressive race to come off limited rest from his 4x800 anchor leg and lead much of the race before holding strong for regional runner-up honors in 4:23.05.

In the 3200 meter run, familiar rivals Louis Colson of Thomas Edison and Nick Tuck of Lake Braddock locked horns again in another battle. It seemed this past fall, they ran closed to each other in many races to see who was the best runner after McGorty in the Northern Region. Tuck had teammate Alex Corbett to help him challenge Colson, but neither was able to break the Edison junior. Instead, Colson did the breaking as he pulled away from both to run a new personal best time in the 3200 at 9:15.42. Lake Braddock had an impressive overall team showing in the race with Tuck in second at 9:24 and Corbett in third at 9:27, while the biggest surprise for them came in sophomore Kevin Monogue advancing to the state meet in fifth place with a 9:40 PR. A great sophomore class of runners was on display in this race as after the senior Tuck took the runner-up position, four of the next five finishers were sophomores in Corbett (3rd, 9:27), Chantilly's Ryan McGorty (4th, 9:37), Monogue (5th, 9:40), and T.C. Williams' Anteneh Girma (7th, 9:42). 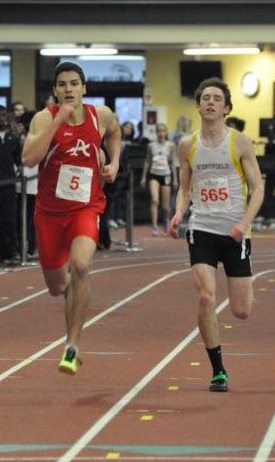 Annandale has some speed at their school as shown with their 4x200 meter relay posting a swift time of 1:31.69. Two of their legs experienced great individual success with Austin Chavez able to chase down 500 meter winner Kiley of Westfield in the final strides of the 300 meter dash with a 35.38 victory, while Alex Ellison was the regional runner-up in the 55 meter dash. 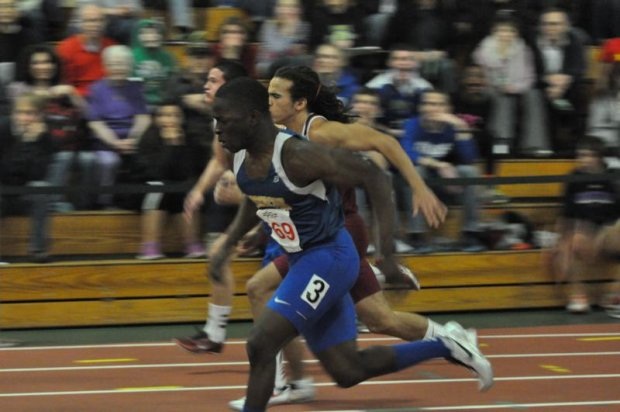 The 55 meter dash finals looked to be dead heat rundown between James Robinson's Ayo Raymond and Mount Vernon's Michael Thomas-Brown. Raymond had the been the region's fastest last indoor season, while Thomas-Brown emerged into that role last outdoor season. In the prelims, they posted nearly identical times with Raymond at 6.49 and Thomas-Brown at 6.50. Thomas-Brown earlier in the meet had claimed the long jump title with a mark of 22'3.50" by a half inch over West Springfield's Michael Conquest (2nd, 22'3"). Unfortunately in the finals, Thomas-Brown pulled up two-thirds into the race with an apparent injury or muscle strain, while Raymond continued to power to the line in a new personal best and VA #3 time of 6.40.  Hopefully, Thomas-Brown prevented a serious injury by pulling up and can compete next weekend at the state meet.

After clearing a new high jump personal best height of 6'3" to place second in the high jump behind champion John Seals (6'4") of West Springfield, Thomas Edison's Ashad Johnson was back in the blocks for the finals of the 55 meter hurdles. In the finals, Johnson proved himself another tier ahead of the rest of the region's hurdlers in clocking by winning nearly 2 tenths of a second at 7.58. His 7.56 personal best performance in the prelims will seed fifth fastest at the AAA State Meet.

The boys' pole vault in Group AAA seems to be wide open for next weekend with no vaulter coming in having cleared over 15 feet this season, so Oakton's Lucas Wratschko has to feel good about his chances after winning the Northern Region title with a clearance at 14'3.50". Wratschko has a personal best of 14'6", which only two other vaulters in Group AAA have gone higher than this season.