From One 4x1 to Another:  Team USA Shares Time With Osbourn Park

The screams from inside the van parked at the Hagen Arena on the campus of Saint Joseph’s University in Philadelphia were loud and long.  For fear of losing their hearing and to fend off campus security Osbourn Park coaches Mike Feldman and Mike Bailey stood their ground outside the vehicle just in case a police officer stopped by to inquire as to what was all the commotion was about. Moments earlier the Osbourn Park Women’s 4x100 Meter Relay had met and spoken with TEAM USA Women’s Sprint Relay.  Carmelita Jeter, Allyson Felix, and Jeneba Tarmoh all took time to visit, share pearls of wisdom, offer encouragement and of course take pictures… and lots of them. 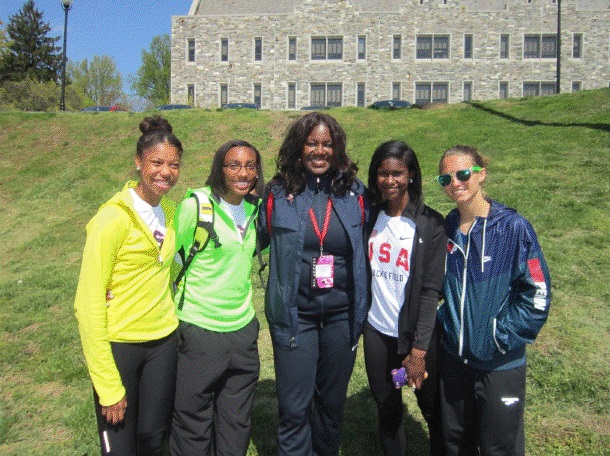 Osbourn Park was invited by Benita Fitzgerald-Mosely, the Chief of Sport Performance for United States Track and Field, to watch TEAM USA work out as they practiced their exchanges for the USA vs. The World competition being held at the Penn Relays.  Fitzgerald-Mosely, a Gar-Field graduate and Olympic gold medalist in the 1984 Los Angeles Games in the 100 Meter Hurdles reached out to Jordan Banks, the Yellow Jackets first carry on their 4x100 Meter Relay.  Bank’s mother Deanna and Fitzgerald-Mosley are childhood friends and remain friends of the heart to this day. 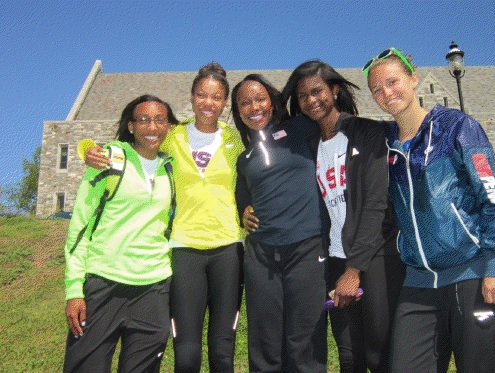 Carmelita Jeter was the first to step off the track and onto the grass bank where the Yellow Jackets were positioned and immediately connected with each of the young women.  Junior Natalie Dent was struck by Jeter’s easy manner.  “She just kept it real and was interested in us. She asked what events we were running and how did we like the Franklin Field track?” Dent said.  Jeter, who won three medals in the London Games and anchored TEAM USA 4x100m Relay Gold Medal victory, quickly identified with the challenges of running and competing on a high school team.  “At some point everybody runs everything don’t they?” she said with a big bright smile.  All four girls chimed in with a chuckle.  Quickly it was stated just how much fun running 400 meters was….which it is not.  The bond was forged. 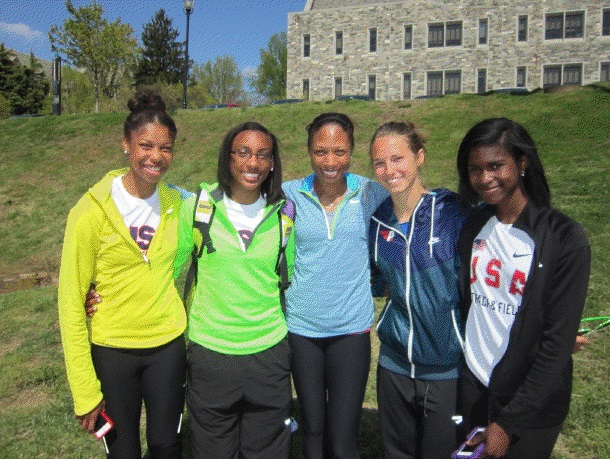 Moments later, Allyson Felix came to bank among the quite stammering of “oh my God, oh my God, here she comes, here she comes!”  Trying to contain their pure joy and excitement, Miss. Benita, as Banks refers to Fitzgerald-Mosely, introduced Felix but no introduction was necessary.  Felix is one of the most popular and recognizable athletes among young women in the world.  Again an instant connection was made among the star struck four.  Felix who won three gold medals in London was gracious and encouraging.  She shared how excited she was to compete and how important it was for her to be representing her team and in her case her country at the Penn Relays. “Just like you guys…right?” Felix remarked.  Junior Kiana Hairston, the anchor of Osbourn Park’s relay could not believe that the star of women’s track and field in America was right there.  Felix is Hairston’s role model on and off the track. The iconic image of Felix sprinting with conviction is on her phone, on a wall in her room and forever etched in her mind.   “It was so just exciting to be in her presence.  Her warm-up was precise, focused, and dynamic. I learned a lot just by watching her. She is everything I thought she would be. It was just so amazing to be RIGHT THERE!” Hairston said. 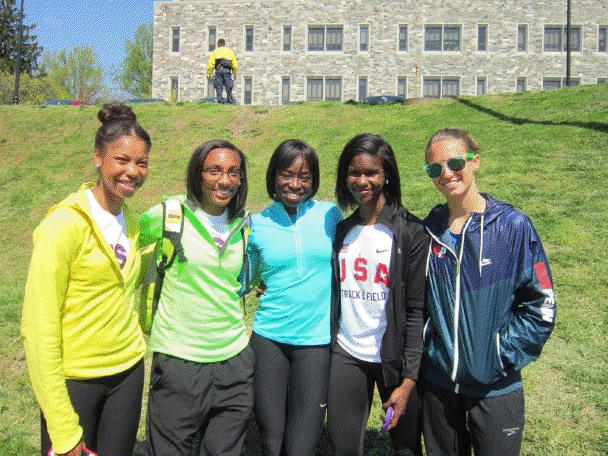 The final visit to quartet was paid by Jeneba Tarmoh.  Tarmoh was the second carry on TEAM USA’s 4x100 in the preliminary round of the London Games.  One of the youngest and more energetic sprinters in the world, she encouraged each of the athletes to remain positive and keep working hard.  Mired in a controversy at the U.S. Olympic Trials over the final spot in 100 Meters her words were poignant and rang of wisdom as a result her past summer’s experience.   Freshman Alexys Taylor could identify with Tarmoh’s words.  “It seems like she knows exactly what we all go through. It like she is one of us.”  Taylor said.  That was the common thread shared with all by all.

Once all the pictures were taken and thank you’s had been said, Jordan Banks reflected on just what occurred.  She and her teammates had the experience of a lifetime.  Forged by her mentor Benita Fitzgerald-Mosely and the childhood friendship with her mother, Banks was elated that she was able to share such a moment with her teammates and coaches.  “Miss. Benita has been a mentor to me for my whole life.  For her to invite our team is beyond what I could have imagined. I am so grateful. I know our team is much closer.  We are all excited to get on the track and do work.”  Banks then climbed into the back of van, screamed for five minutes with HER GIRLS over their good fortune.  She then dialed up her mom to tell her all about it. One could hear Deanna Banks smiling through the phone.