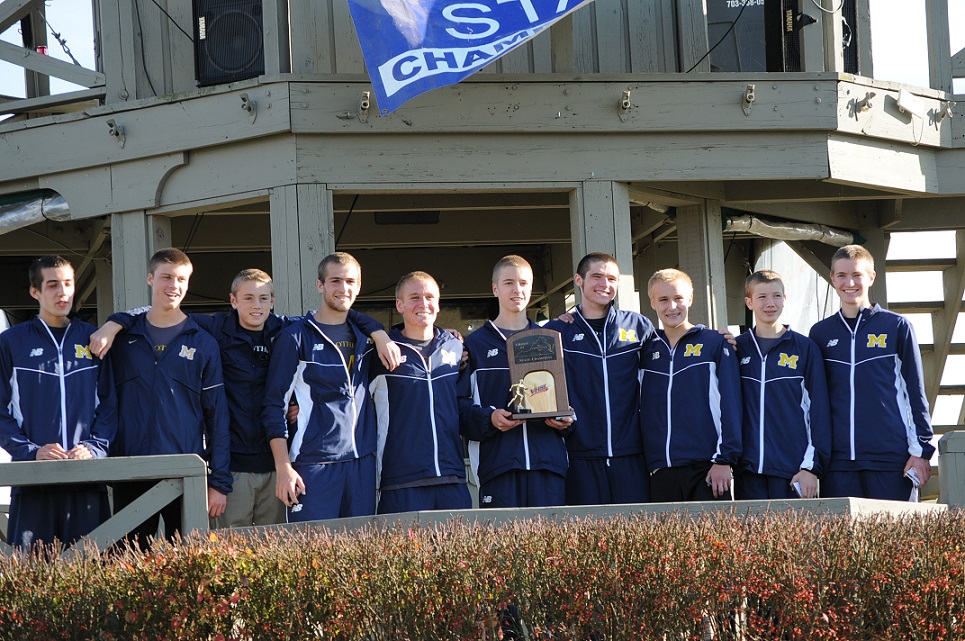 The Midlothian boys won their fifth state cross country team championship in their program's history two weekends ago at Great Meadow after breezing through their new home classification of 4A by sweeping the top three places individually with race champion Tommy Mulroy (15:39), runner-up Evan Benjamin (15:46), and third place finisher Collin Hahn (15:49). Despite having to essentially battle it out between teammates for first, the Midlothian boys were able to have three guys run under 16 minutes at Great Meadow and post the fastest team average among all 6 state meet races at 16:04.  The lone senior among their top 6 runners, Mulroy became only the third individual state champion in cross country for Midlothian joining the likes of past Foot Locker finalists in 2007 Group AAA state champions Jason Witt and Kathleen Lautzenheiser. While their team had one of the better top three's in the state, the Midlothian boys found themselves short on depth for much of the season especially with then their projected #4 runner Randy Hahn missed almost the first two-thirds of the season due to injury. Hahn came back in time for Midlothian's last major invitational race at the MileStat.com Invitational which helped boost them to a runner-up finish against many of the top ranked teams in the larger schools 6A and 5A classifications.

The sophomore Randy Hahn, a 4:23 miler and sub 9:40 two miler for Midlo last spring, was still able on a shortened season to finish All-State at Great Meadow with an 8th place finish of 16:22. The biggest key or savior for Midlothian's success this fall was the development of #5 runner Zack Wilson. Wilson had only run 18:32 for 5K last year as a freshmen and ran 4:55 last spring for 1600 meters, but he really stepped up to the call by his Midlothian teammates and coaches for someone to fill that critical final scorer role this season. The sophomore kicked off his season with a near minute PR of 17:34 at the Great Meadow Invitational and would nearly chop off another minute before the season was over after posting a time of 16:36 in their conference meet. At the state meet, Midlothian's front four did not have to wait too long to see Wilson coming down the final stretch to join them in the finishing chute to celebrate a team title as he came through in 22nd place and a time of 16:47 for his team to finish with an incredibly low score of 32 points and a comfortable victory in 4A.

​A former football coach who never ran cross country in high school and did not start coaching cross country until later in life around the age of 50, Midlothian head coach Stan Morgan has put together a remarkable run of teams since his first podium boys' team in the 1999 season. Over that span, the Midlothian boys have won 5 state titles and been state runners-up four times. The years that they have not been a podium team have been extremely rare. Add in the 6 past state champion squads for girls along with the great potential and possibilities in the coming years in their new 4A classification facing now similar size schools (Midlothian's enrollment has been in the 1400-1600 students range for much of the last 12-15 years), the 70 something year old Coach Morgan and the Midlothian program could be actually entering their prime years of championship glory. 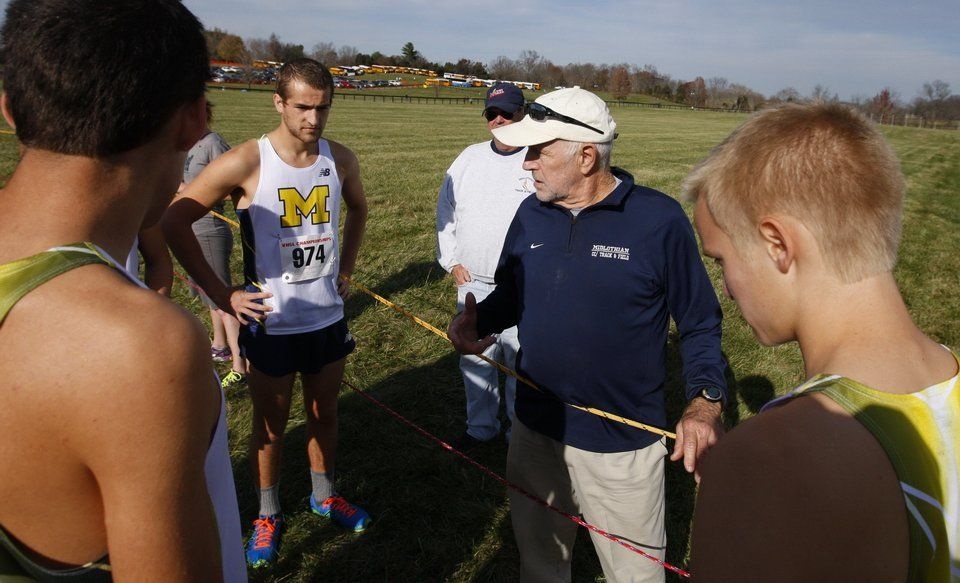 How many years have you now been coaching?
I have been coaching Cross Country since 1989; was a football and indoor/outdoor track coach before that. I was coaching football and track at Midlothian; was asked to coach cross country in “89” , probably one of the best decisions I ever made.
What kind of training did your team get in over the summer months leading into the season?
Our summer training starts in mid June; I like to give the kids a couple weeks off after the outdoor State Meet. The athletes get a summer training guide with what is expected of them to do during this time. We try to just build a very good base over the summer ; increasing mileage slowly, doing tempos , fartlek  and hills.
How did you train the team in the final weeks leading up to the state meet?
Five weeks out from the State Meet we have some special workouts that we incorporate into our training; along with some quicker turn over. We also do a lot of cruise intervals and tempo type workout; plus do pool workouts in the mornings , at least one time a week, if not two times. 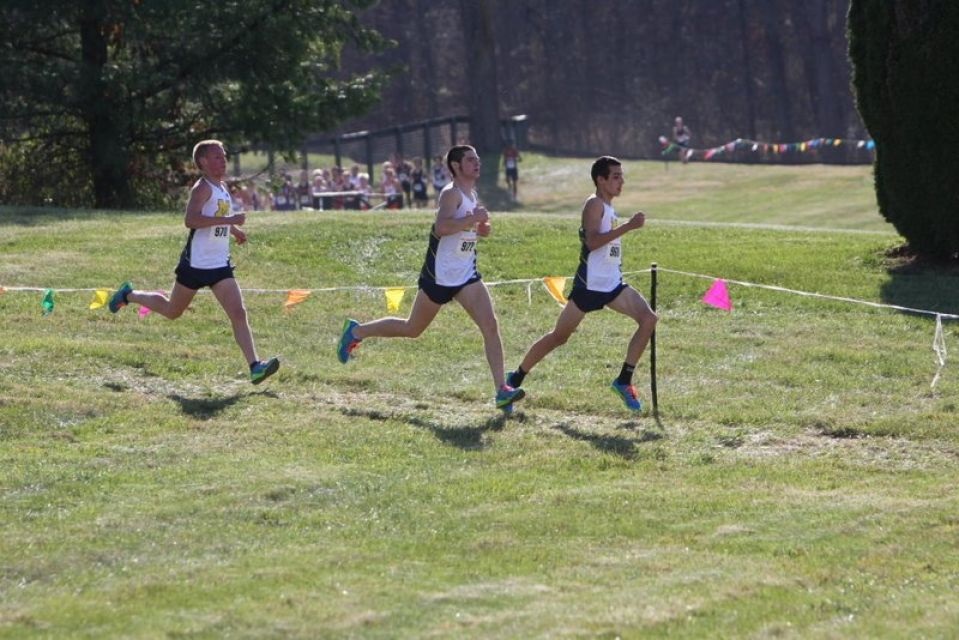 What chances or belief did you have in your team's chance and ability to win the state title?
Our number one goal every year is try to achieve a  place on the podium and hopefully the top spot. We had lost some good guys to graduation, but also knew that I had some very good young guys returning and if they worked hard over the summer,  we could be in the hunt. Also we needed to have some people who hadn’t been a part of the top 10 in 2012, work hard and step up; then we possibly had a shot at a state title.
What advice or points of emphasis did you give your team prior to the race or the week leading into the state meet?
My advice to our top 3, Tommy, Evan and Collin; just do what you’ve done all season and that will be a big factor. Then we needed Randy Hahn to get back to his old self and have Zach Wilson who is our number 5 step up and I thought we would have a chance.
How did you feel your team raced at Great Meadow this weekend?
I thought the team ran very well at Great Meadows; I couldn’t have asked for anything better from their race. Having your top senior win the individual State Title and your team win the Championship; it was a great day. 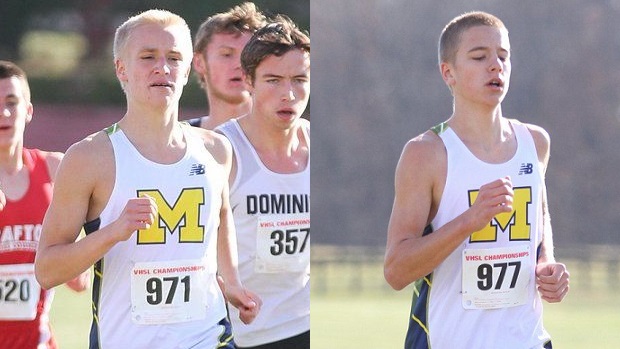 Who do you feel really stepped up individually the most for the team at the state meet?
I thought they all stepped up, but I think Randy Hahn and Zach Wilson; especially Zach who is starting to see how important he is to the team, did a great job.
What were your feelings and emotions when you realized your team had won or during the awards?
I felt really happy for the kids, because they wanted to win this title, after finishing second last year. It’s always a great feeling when you know that you’re on the podium and especially when you’re the last team called to the podium.
What were the biggest challenges for this year's team?
I think the biggest challenge for all coaches is getting that great quality training, but most of all is keeping everyone healthy. Injuries can really bring a program down and out of the hunt quickly. We were lucky to get Randy Hahn back for the very end of the season and keep everyone else injury free. 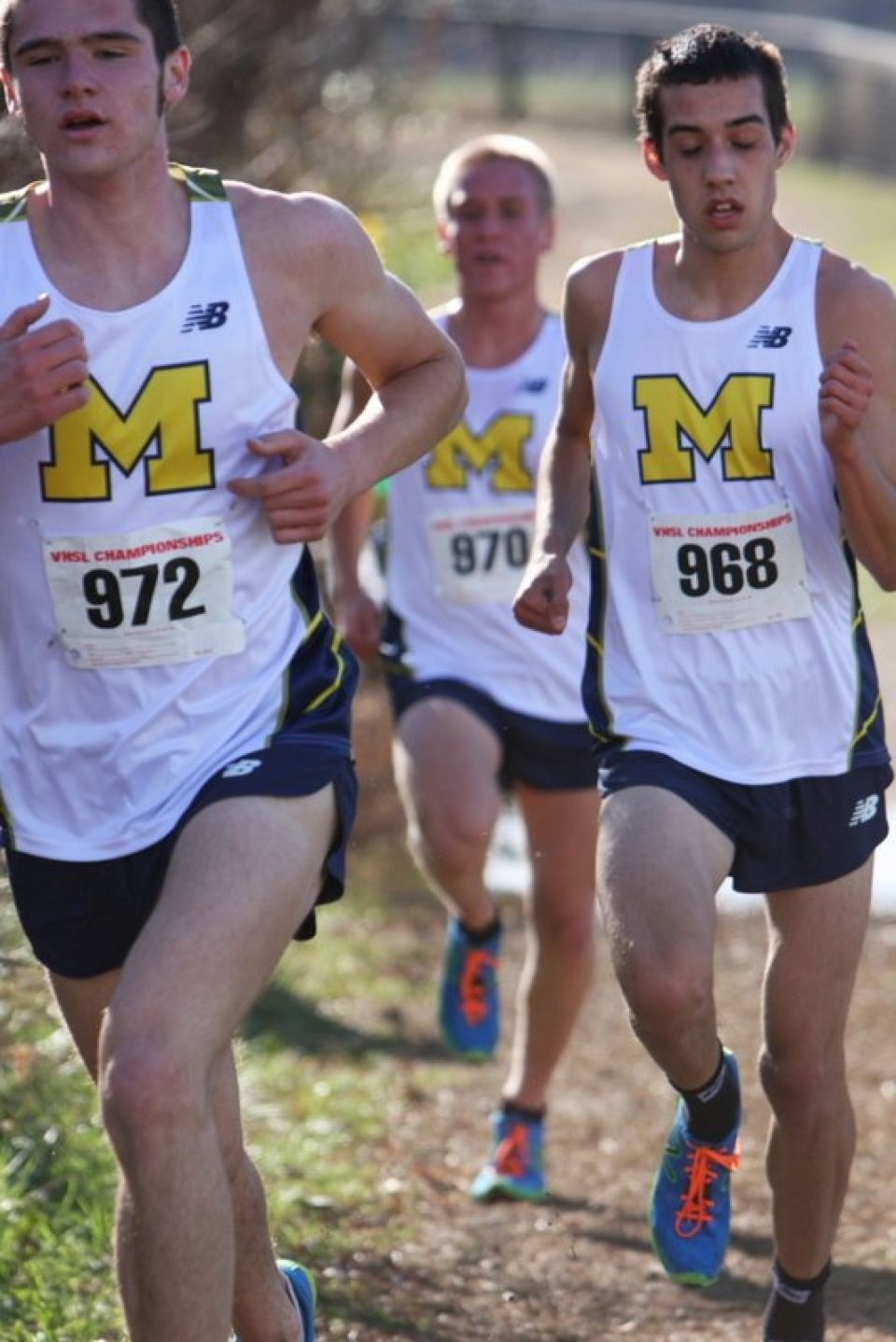 What do you think were the keys for your teams to peak and perform their best at season's end?
The method I have used over the years and has seemed to work somewhat; has us running our best times late October, early November. We run in trainers at a lot of our early season meets and don’t stress over the outcome of those meet. Our main focus has always been to try and be at our very best at the end of the season.
What would you consider as the low point of the team's season? How was the team able to respond?
I don’t think we really had any real low point in our season this year; after we found Randy would be back with us and Zack was getting stronger.
Was there a particular race, workout, or moment that you knew that your team was ready or had the potential to become state champions?
I felt like we had a fairly good shot to be a contender, with our top three individuals and especially if our number 4 is healthy. Then when our number 5 had a break through race and  started to show what he was capable of doing, things started looking like we had a chance to be a top 2 team or even be at the top spot. 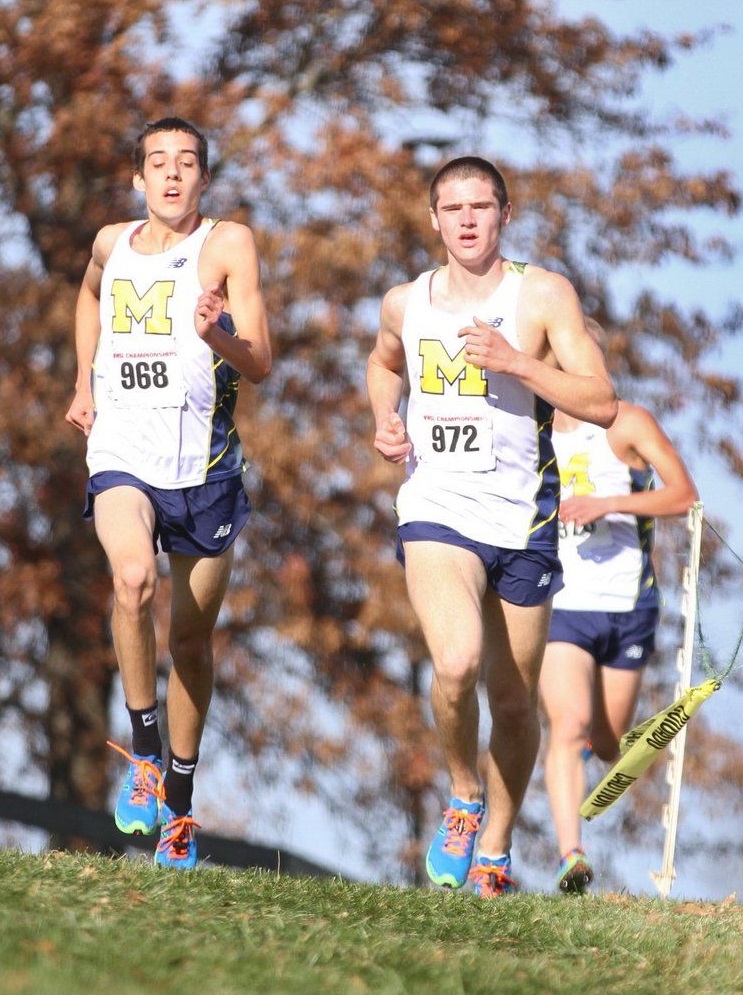 How would you best describe the group of kids that you coach?
I have had some very good teams, since I’ve been at Midlo; I feel this is one of the better teams top to bottom. These young men did an incredible job this past season and I am really proud of what they accomplished.
What role do your assistant coaches play with the program?
I have a great assistant coach in David Benjamin, he does so much with the program. He really has a knack for keeping the young kids going in the right direction. He helps keep me straight, when I get uptight and is always there when needed. I couldn’t ask for a better assistant coach and am thankful for having him on staff.
What role do your parents have with the program?
I feel like the parents at Midlothian are so supportive and always there to help when needed. They help with travel on overnight trips, help set up dinner reservation and help
with fund raising. I feel very lucky to have such great parent and thank them for giving me great kids to work with.. 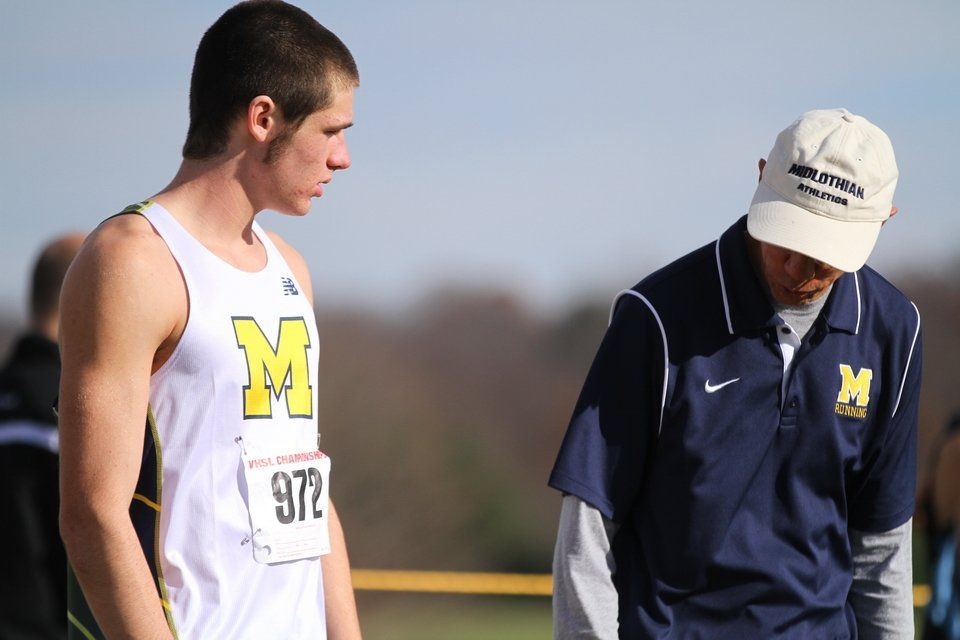 What would be the best way to describe your coaching style?
I love coaching cross country and believe this is one of the best team sports there is; seven people very dependent on each other to perform at their very best. I emphasize, that you need to believe in yourself and trust your body, especially if you’ve put the work in over the summer. They need to understand their bodies can do a lot more than they realize, if they get out of their comfort zone and hurt a little (a lot). I love to take young athletes; watch them work hard and experience success from the work they’ve put forth. I also am there to encourage and motivate the athlete; plus hopefully help them improve as a person and a runner.
Who were the leaders on your team and what was the importance to the squad?
Tommy Mulroy was this year’s team leader and did an excellent job; he will be missed next year.
Who was the biggest individual surprise or runner that most impressed you with their improvements this year?
Evan Benjamin was definitely the individual that really impressed me this cross country season. He’s had a great season and really doesn’t realize how good he can be. I feel he has the ability to be one of the best runners in the state next fall. 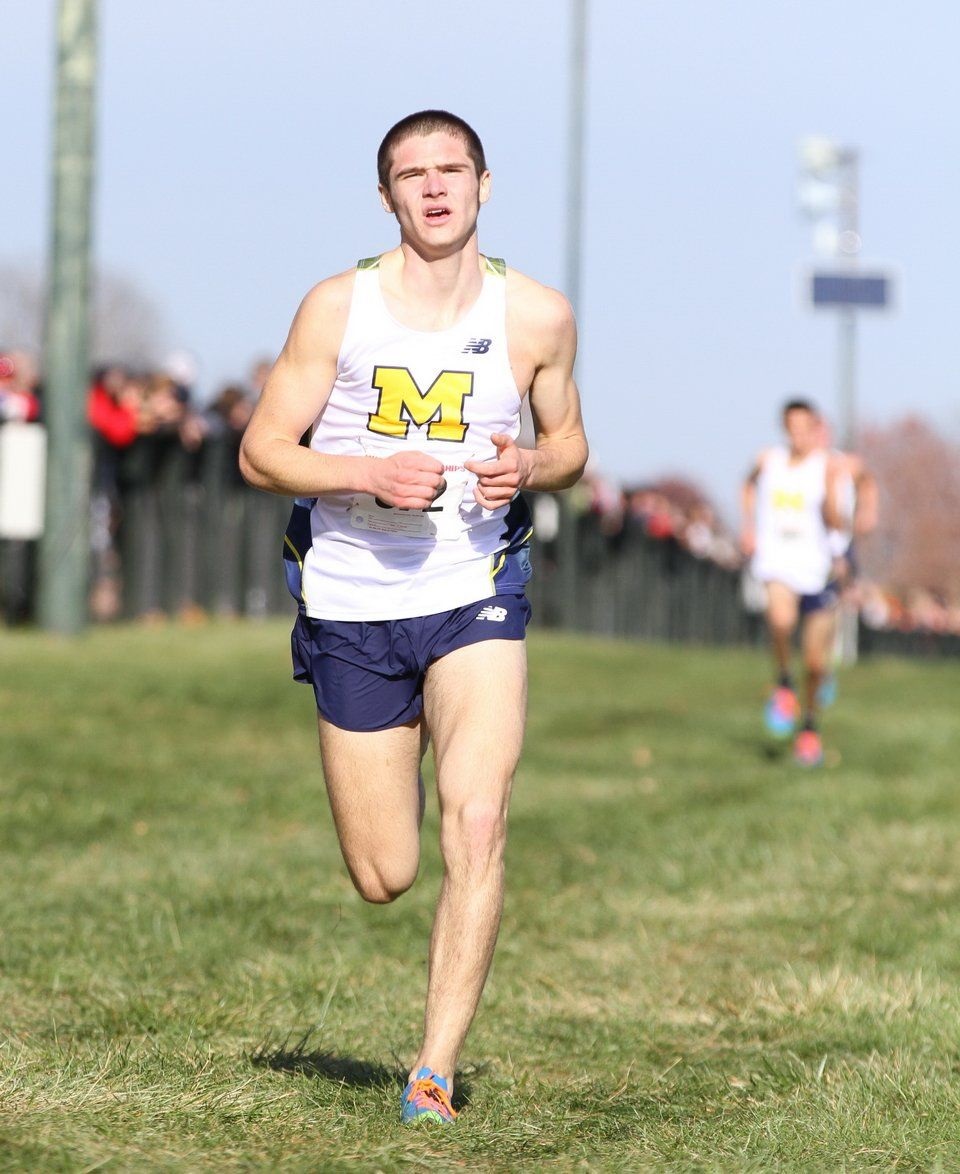 How would this team rank against some of the past teams that you coached?
This team would be ranked right there with some of the best teams that I’ve had at Midlothian.
Every state championship team seems to have a special or unique makeup that makes them state champions. What were some of those characteristics of this year's team?
The characteristics or make up of this team, is they were all determined to work very hard to achieve their goals of winning Conference, Region and State Titles.
What are your expectations for next year's team?
Next year’s team will return Collin Hahn, Evan Benjamin, Randy Hahn, Zach Wilson and Court Warfield, all in this year’s top seven. This should give us the opportunity to make a run for another shot at the podium; plus there is some young runner on the team wanting to break into that top seven. 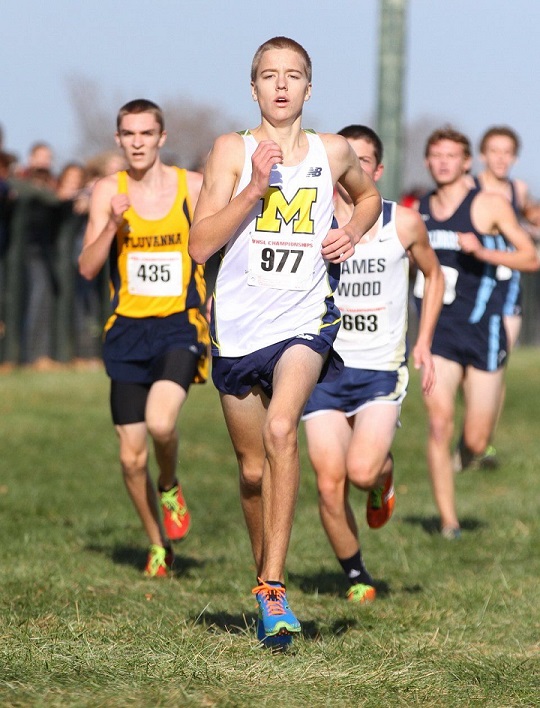