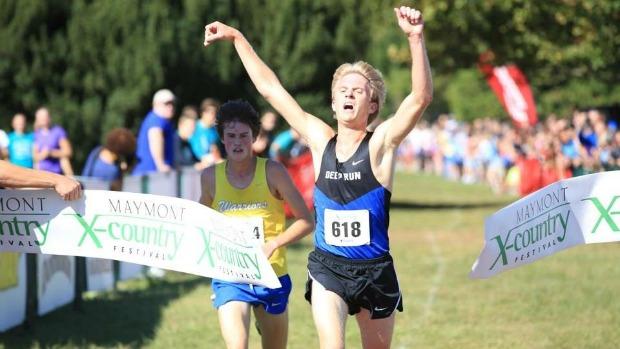 If you want to talk about epic XC races this season then you cannot forget to mention the epic race between Novak and Willcutts. Though we did not know it at the time, this race was between a state champion and eventual national mile champion and a FL Finalist! That is a star-studded race if you could ever ask for one.

This race in particular started out great. Both runners got solid starts and came through the opening mile in 5:00 on the very hilly and tough Maymont course. They followed that mile by running a 5:24 second mile split to come through the two mile mark around 10:24. After this point though Willcutts, Novak, and Tabb's Baron Kieffer began to assert themselves. They lengthened their lead on the pack and started their long kick towards the finish.

The crowd was going wild with 1000m to go it was these three guys dead even and it wasn't until 500m to go that it became a foot race between Novak and Willcutts. Around the corner they came and the fans were crazed with excitement as these two stars sprinted down the stretch.

As they approached the line, no one was taking a decisive lead and it wasn't until Willcutts stepped in a low spot in the course causing him to misstep that Novak took a commanding lead just 20m from the tape. After that misstep, which Willcutts said was just a part of XC, Novak reigned supreme.