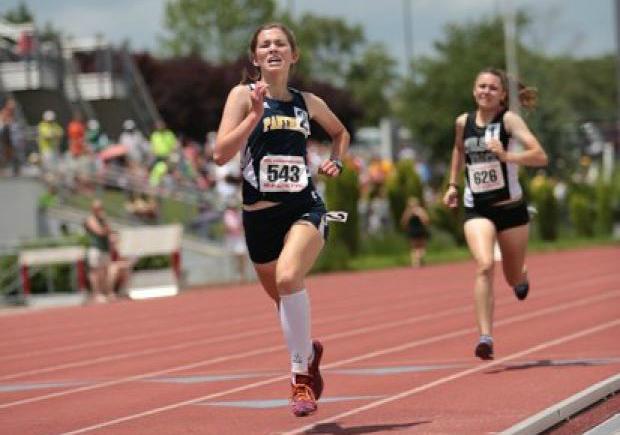 William & Mary is quite the smart school and they definitely have some smart coaches who successfully recruited Julia Wood to run at their school next year. That will of course be the next chapter in her life, one that will likely only be bigger and better than the others. Let's take a look back though at Julia's progress the past four years.

Unlike her story counterparts, Julia was unable to compete in XC as an 8th grader. She hit the course as a freshman in 2012. She no doubt had talent but it is always hard to see where a young athlete's ceiling is. She kept improving all year and was actually the Bull Run District Champion. She would go on to place second at regionals and in her first state race ever finish a very respectable third place with a 19:50 time.

It was that outdoor season though that things started to click. Step by step, workout after workout she kept improving.  Despite not having an indoor season she kept improving all the way to the A Outdoor State Meet when she ran to victory in the 1600 with a 5:11 time. She won this title, the ever important first state title, by just .93 seconds over senior Hannah Rose.

No one knew it then but this victory was historic. Today, because of this title, Julia is the only VHSL athlete to still be running high school track and to have won a state title in the old AAA/AA/A system. She is the final one.

Looking back at it you can easily see this is where it began. It is not easy finding great competition way out in Rappahannock County but slowly she built a name for herself and meets wanted her competing there.

Her sophomore year this was very evident as she raced in a staggering 11 races all season. She tallied up seven victories in those races all over the state and east coast. It was all a build up for the 2013 State XC Championships, the first 1A State Championships to be held.

Despite the field being smaller, this race was ever larger for her. She had achieved the highest honor in our sport by winning a state championship but still needed an XC title. You could tell even in her body language that she was ready for this race. Though she smiles a lot and seems happy, she had one thing on her mind and it involved her crossing that finish line first.

She took off and was stronger than ever. She kept going pushing further and further ahead. She opened a gap and then the gap widened and kept widening. She rounded the turn and hit the fence line and never looked back. It was perfect racing weather and it was a perfect race. She powered through the line in 18:47 to win her first state XC title. In doing so she also helped her team to a runner-up finish.

After states she won her Foot Locker South sophomore race to go along with her freshman race win a year prior. After her sophomore season things were looking great. 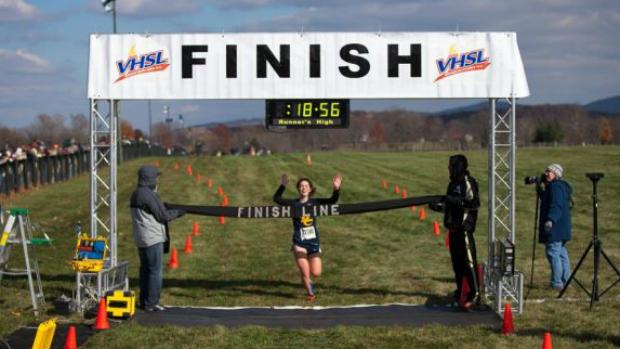 A year later in her junior campaign and things kept getting better. She was getting used to being a star and learning how to say no to racing in a ton of meets. She and her coaches throttled her training up and races down. This seemed to be a great thing as she quickly improved.

Once again she was back in one of her favorite places, Great Meadow. She knew her competition better but more importantly knew how to win. She opened in 5:55 throwing any excuses aside for the very cold & windy conditions. She had a 11 second lead.

She followed that first mile up with a 6:08 second mile to come through at 12:03 now 34 seconds in the lead. She now entered her favorite part of the course, the place she knew best.

She was all alone, her and the hill and she showed everyone there how to run that infamous last mile at states. She powered through it and closed strongly despite having ran in the wind by herself the entire race in 18:58. She too helped close the team gap as her and her teammates finished second by just two points.

Two weeks after states she had her best race to date finishing 23rd at Foot Locker South in a personal best of 17:56. Just over two weeks after that she once again broke 18 running a strong 17:58 to finish third at the Junior Olympics.

Sadly, it seems when everything is going perfect that the bad stuff hits.

It seemed though that fate had a thing or two to say about that. Near the start of the season Julia started having back problems. It made it excruciating to train and get the most out of her workouts. Being the champion she is though she pushed through it.

It got bad. Really bad. So bad that after the MileStat.com XC Invitational she did not know if she was going to run again this XC season. 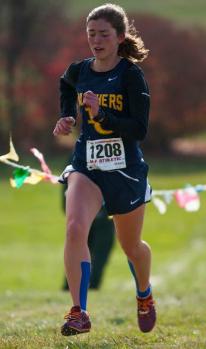 Not surprisingly, she is a hard worker. She had worked very hard to get to this point and in doing what she does best, decided to work even harder. She did as much rehab as she could with her busy schedule of school, races, and training. To even have the chance to run at states she had to compete at conferences and regionals.

It would have been best to sit back and rehab until states but due to the way teams and athletes advance, she had to run to ensure she made it. That pushed her back rehab back and back. She didn't know if she was going to be able to really run but did know she would try.

Just like how fate can swing to the bad, it swung right back to the good for States weekend. She said it was one of the first times in quite some time her back was manageable. She used this to her advantage and did the best she could.

She opened in a much more conservative 6:18 and for once had a lot of company. She was joined by Mary Elliott and Sophie Dryden all at 6:18 through a mile. Then another new thing happened, she was still joined by those two ladies all at 12:45 at the two mile mark.

But then, just like all the champions before her, she dug deep and found that next gear. She must have thought back to that race back in 2013 pushing up the hill and knowing no one could keep up and that it was her race and her time.

She separated and drove down the finish stretch one last time. She threw her hands in the air and was nothing but elated with joy as she won her third title in a row in 19:44. Showing everyone that it doesn't necessarily matter the manner in which you win but that you win.

She won with humility, respect for her competitors, a whole lot of talent, and trust in herself.