In a season that ended with two teams making it to NXN and a sweep of the Foot Locker National titles it is no surprise to see many different headlines. This series though seeks to find other headlines and stories that are not average but just as important and interesting. 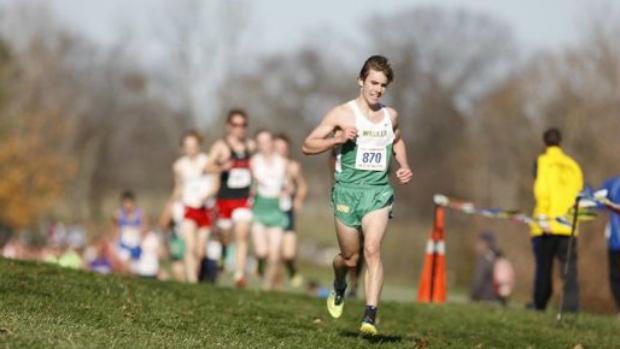 This story involves decades of coaching at numerous schools but a special grouping of years at one school that embodies what it means to be a student-athlete. Opening in 1991, Maggie Walker has quickly gained a name for itself both academically and athletically. Its rigorous course load is only surpassed by the expectations in athletics. Despite having just a few hundred students, the Green Dragons have had little excuses and many titles.

Head Coach Jim Holdren is one of the most legendary coaches in the entire state of Virginia. He has been in the coaches hall of fame for decades and has positively affected our sport in more ways than we can list. Over the years as an administrator and coach at Maggie Walker they have tallied up seven state XC titles. Six of those were 2A and in 2001 the boys team won the AAA state XC title.

With all those honors and trophies hung around the school there was still one thing missing. One thing that finally happened this season.

Back in the middle of August up in Madison County Ryan Buscaglia took to the course for the first time of his junior season. He laced his shoes up and hit the course in the Camp Varsity 3K. He finished in third behind Ben Fogg and Colin Schaefer both from Lake Braddock but with a solid time of 10:26.

This season was the focus for Ryan. He had placed highly in many state races the previous years and last outdoor season was the state champion in the 800. But this season had a lot more meaning to it.

After finishing runner-up a year prior to Brad Swiney, he was on a mission. Even though he is in the 2A classification, him and the entire Maggie Walker team had very high goals of racing the best in the state regardless of classification.

The team started their season at the Newport News Invitational and moved from big invite to big invite throughout the season. Through the regular season and those five races Ryan had placed fourth twice and second another. He was running well but knew something was off.

Just prior to the MileStat.com XC Invitational his injury really showed its face. This injury had been off and on bugging him and thankfully he could finally pin it down and fix it. He still raced, though very conservatively, in this huge meet. He finished well but knew that it was more about the long term than instantaneous gratification.

His post-season started at the Conference 33 meet held in Williamsburg. There, against his conference and own team opponents, he finished 4th. But he knew now that it was his time to turn on the jets and start the final push.

Just a few days later it was time for the 2A East regional at Panorama Farms just outside of Charlottesville. Despite this course being very hilly he still managed to run a solid 16:47 to win the regional crown and beat out his teammate Evan Fisher by six seconds.

Onto the state meet.

This was what he was working towards. He wanted to finally cross that finish line with no one in front of him. His race started out with that just in mind. He opened in 5:06 leading the way by just a second over his competition and six seconds ahead of teammate Evan Fisher.

Coming through the second mile his teammate had puled even with him. They went through at 10:24 and 10:27 with a gap back to the others. It was the race both of them expected.

Down the final stretch both of them came with history on both their minds. Ryan held the slight lead but with 200m to go started to widen the gap. He stretched it to about six seconds and held on to cross the line in 16:21 ahead of Fisher's 16:29.

Ryan made history. In crossing the line in first, Ryan became the first ever boy to win a state XC title for Maggie Walker. It was almost shocking looking up the names for how many greats had run there but had fallen just shy of winning the title.

For years Maggie Walker ran in the AAA and was one of the powerhouses. Over the years they had accumulated numerous triple crowns and seven state team titles but it wasn't until Buscaglia that they could complete the trophy case.

24 years after the school opened and after all those team titles, Maggie Walker finally got their boys' champion and it was because of Ryan Buscaglia and teammate Evan Fisher that they accomplished that feat.

This shows you just how competitive and inextricably difficult it can be to win a state title no matter what powerhouse you go to or what race you are in. No matter how big or small the school, winning the state xc title is a huge deal and an honor that only one person gets to do each year.