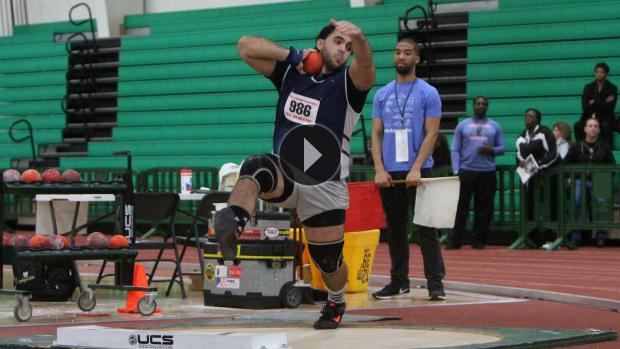 Benedict Draghi of Washington-Lee was the first winner at this weekend's 5A/6A state track meet. However, his victory didn't come as easily as expected.
Draghi entered Friday's 6A boys shot put event with a best throw of 61-4.75, over eight feet ahead of his nearest competitor, Grassfield's Seth Harrell, who won the title last year. But, after a meet record throw of 54-10.25 on his first attempt, Draghi's form, which allowed for a 62-foot toss in Friday morning's warm-ups, seemed to disappear.
Although Draghi didn't get the big throw he was looking for, his performance wasn't hindered by a sudden case of anxiety. For the thrower, nerves are part of the game.
"I get nervous during every meet," said Draghi, who watched as first Harrell (54-4.25), and then Donald Lanier (54-4.25) of Western Branch both crept into a tie for second place (Note -- Harrell took the silver based on a better second-best throw). However, Lanier's toss came on his sixth and final throw, while both Draghi and Harrell scratched on all three throws in the finals, leaving the General junior as the last man standing.
Still, Draghi left Boo Williams Sportsplex with a meet record and a first state championship -- quite a feat considering where the thrower was last December.
"Two months ago, my best throw was about 50 (feet)," said Draghi, who will continue his quest for a personal best ("hoping for 62 or 63") at the New Balance Nationals, which will be held inside New York City's Armory Track Center beginning March 11th.
"My plans are just to keep practicing," adds Draghi, who has now dedicated himself solely to throwing after stopping football after his freshman year.
One element may have been missing from his putting repertoire on Friday morning. After his fourth attempt, throwing coach Josh Patulski was quick to note, "Why isn't he yelling?" Indeed, Draghi was mostly silent during his series of throws. Asked if the concern was shared between rounds, the answer was negative.
"(Patulski) lets me do my thing. The way he figures, there's nothing that can be changed during a competition. We'll work on it afterwards. He does give me some easy tips on the side between throws."
While Draghi is preparing to throw in college, his next destination is not set -- at all.
"I've received a few letters from colleges so far. But right now, I really have no idea where I want to go."
Since Draghi has just over three seasons of high school competition to go, college coaches still have time to get their recruiting scripts ready. Meanwhile, the thrower's preparation will continue - with Patulski at Washington-Lee, and outside of Arlington, at camps, such as one of the five throwing academies run by John Godina, a three-time World Champion and two-time Olympic medalist who Draghi models his throwing style after.
Teammate Tony Auguste, a junior, placed fifth (49-6.25) to give the Generals 15 points, enough to put them in third place after Day 1.