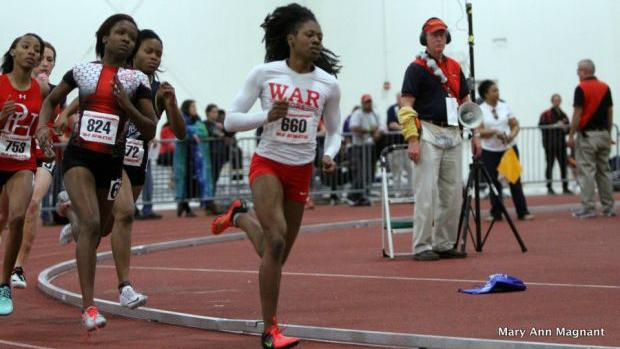 For the past two years, Brandee' Johnson of Nansemond River has missed competing in the state meet at Boo Williams Sportsplex.
As it turns out, the feeling is mutual.
Johnson's state appearances were relegated to Liberty University and Harrisonburg High during her sophomore and junior years, as the Warriors were reclassified as a 4A team. The downgrade had no bearing on Johnson, who is nationally ranked in several events, and capable of winning a state title at any level. In fact, she won eight championships between indoor and outdoor seasons at the 4A level - in the long jump, 55, 100, and 300-meter hurdles (twice) , the outdoor 200 (twice), and indoor 300.
But returning to Boo Williams was special, according to her mother Aquilla.
"It's great to be able to compete closer to home."
And Johnson did more than merely compete. Her four gold medals and 48 total points helped the Warriors ease to a 49-point state championship triumph over second place Maury.
Johnson's Friday started out with a personal best of 39-3 in the triple jump where she placed second. An hour later, she began her attack on the track, posting top qualifying times for both the 55-meters (season best of 7.05) and 55-meter hurdle (7.85) finals.
Johnson started off Saturday with a resounding reminder that she was back at the Boo. In the 55-meter hurdle finals, she breezed to her first victory in a BWC facility record time of 7.83. Thirty minutes later, it was back to the track, where she blazed to a second win, this one in the 55, in 7.07, which was good enough to place Johnson on the all-time state list.
Next, it was off to the long jump, were Johnson completed the trifecta, winning with an 18-9.75 jump.
With her trio of gold medals in hand, Johnson could have called it a day, and watched as the WAR team cruised to an easy team win.
Instead, Johnson charged through the 500 in 1:16.77 to earn an unprecedented fourth individual gold medal, one which should cement her name in the VHSL record books for many years to come.
Looking ahead, Johnson's college choices have narrowed down to two -- Florida and LSU. The process of winnowing down her list to two has been an interesting process.
"Brandee' told me, this is the next four years, and she really wanted to be comfortable with where she was," said Aquilla. "After the season, she'll sit down with me and my husband, and Coach B (girls coach Justin Byron). Coach B has taught her well, as to how to know her track IQ. She asks the college coaches questions about types of training and other things."
"I have a great coach," added Johnson. "He has taught me, and every athlete that has ever run for him that you have to know what you're getting into before committing yourself to a university."
Reflecting on her triumphant return to the Booplex, Johnson, who is rarely at a loss for words, began her thought with "I can't explain it," before gathering her thoughts.
"Knowing that my first and last state meets were at Boo brings enjoyment to my heart." Thinking of her accomplishments, Johnson added, "I wanted to leave my mark, so that anybody who comes here after me will remember who I am."