This is the year for VA, check out all the major contenders for our state over the next three pages. 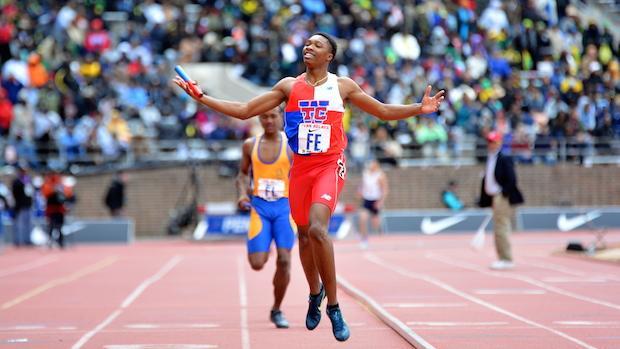 For years our state has been building up for this year at the Penn Relays. Not only are there individuals stars but most importantly there are relay teams with serious shots at winning wheels this year. The two teams with the clearest paths to this are Loudoun Valley and Lake Braddock in the boys and girls distance medley relays.

Loudoun Valley will be anchored by national record holder Andrew Hunter as he attempts to be the first athlete ever to win a 3K, Mile, and relay title at the Penn Relays.

In the girls DMR Kate Murphy will be anchoring her bruin teammates to flip the script from indoor nationals where they finished a close second behind a national record.

In the 4x800's E.C. Glass and Western Branch (girls) will be pushing hard to make the finals and be in contention into the final legs. Glass (as they are titled in the program) will be vying for the title overall as they went 9:02 indoors this year. They could likely have company from Branch who was the top American team last year and returns three of the four.

In the 4x400s for girls Nansemond River and Western Branch will reignite their rivalry in what could be an epic showdown.

On the boys' side T.C. Williams enters both sprint relays as serious title contenders and potentially even favorites in the 4x400 relay. That is of course due to the fact they have both Lyles brothers running and you can almost guarantee they split something in the 45's if they want to really win this title.

Finally in the girls' 4x100 are the Warriors of Team War, aka Nansemond River. These girls are the state record holders in both the 4x100 and 4x200 and ready to rumble against their Jamaican counterparts this year. Expect something very fast from them if they make the finals... 44 something!