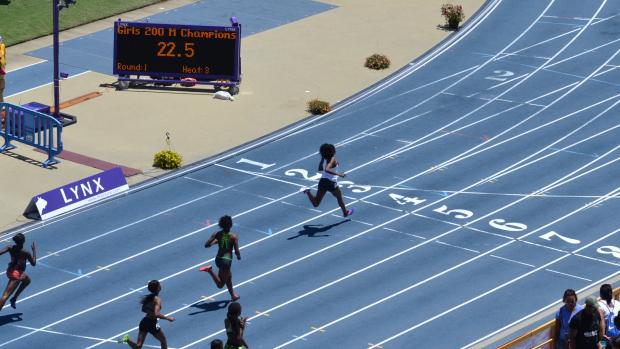 GREENSBORO, Nc. - The queen of VA sprints definitely earned her title this year by becoming likely the first ever girl to complete the double triple sweep at states. She won every single sprint even this year and even was all-state in the high jump. She is an athlete that always doubles and sacrifices a lot for her teammates, which are all returning it should be noted. This weekend had a difference though.

Despite being a dominant 400m runner, her coaches decided to have her just in the 4x100 and 200m dash to really have some strong performances and to be running at top speed. Though her 4x100 finished third in VA #7 All-time 46.35 and she finished as the national runner-up in the 200, the real story for her this weekend was the 200m prelims.

In the prelims, in great conditions with a legal wind of 2.0mps she made the absolute most of her race and stepped up when she needed to.

She blew out of the blocks and drove down the straightaway with only Rush-Henrietta's Lanae Tava-Thomas close by. She crossed the line and the crowd all shouted but it wasn't what Lauryn thought it was for.

Then the announcer came on and said the time of 22.97! That time shattered Francena McCorory's previous mark of 23.22 by a huge margin.

This time was also so fast that it gave her the Olympic 'A' standard which allows her to compete at the Olympic Trials and if she were to place in the top three there, an automatic spot on the United States' Olympic Team.