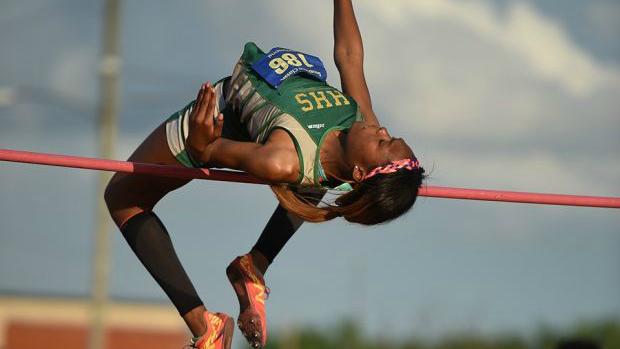 ORLANDO, Fl. - After a disappointing state championship and national performance, as a only a junior, Dymiere Jeffrey decided it was time to show the entire nation who the best jumper is. At the AAU Club Championships she put on a show in the Heptathlon high jump by clearing 1.80m which equates to 5-10.75.

We say disappointing not because anywhere here thinks it is but because we feel she knew she could have performed better at both of those competitions. At nationals she only managed to clear 5-5.75 and at 5A States she missed her first attempt at the opening height and because of that lost on a tie-breaker to jumper of the year Bria Stith.

Aside from those competitions, she compiled arguably the best high jumping resume in VA by winning the Southern Track Classic, Lee-Davis Invitational, 5A South Championship, Highland Springs Invitational, and finished 10th at the Penn Relays Carnival.

That performance is a VA #1 this year, US #3, and is also a Virginia State Junior Class Record beating Paula Girvin's 5-10 from 1975 and DeShana Briggs's 5-10 from 2007. This performance moves her into 6th all-time in the state of Virginia with one year of eligibility remaining.

That performance would rank second all-time indoors for Virginia.