The weather was up and down to start New Balance Nationals but Team VA's performances were only up. Through just one day of competition we saw five All-American finishes and six EE/Freshmen champions from the state of Virginia.

Starting action off right were the ladies from West Springfield. The quartet of Coleman, Marcucci, Kappeler, and Mayberry took care of business in the Girls EE 4x800 to bring home the win in 9:17.35. Next up on the EE front was the 4x200 relay where Team VA led the charge once again. This time it was Mills Godwin's relay of Greene, Wilson, Alexander, and Brendle taking the win in meet record fashion with a clocking of 1:39.58. 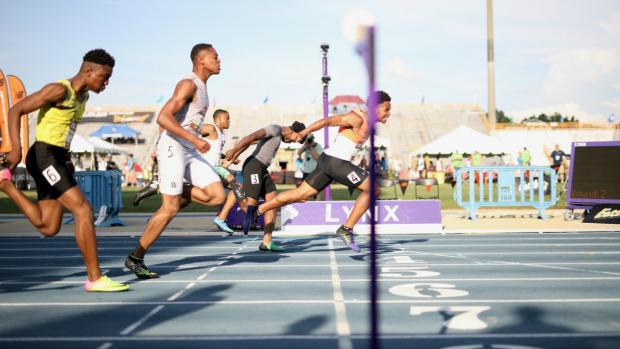 Individually taking home titles were Kaitlynn Wolfe (Blacksburg), Chris Tyree (Thomas Dale), and Matthew McKiver (Annandale). The most impressive of them definitely being Chris Tyree's 10.98 win in the freshmen boys 100 final. Be prepared for some fast times from him in the near future.

Wolfe brought home the title in the freshmen two Mile with an 11:02 clocking and McKiver tied for first in the EE high jump with a 6-6 best. Both athletes separated late and did the work they needed to win in very hot conditions.

State Champion Amari Jackson (Woodrow Wilson) also had a stellar day and improved her season best triple jump to 39-1.75. That performance from the WW junior was good enough for second in the event.

In the championship races of day one, Team Virginia definitely stacked the box in both Swedish Medley Relays. That event being 100, 200, 300, then 400.

Up first were the girls who definitely had their hands full yesterday. Though we had some stacked teams in their, it ultimately was the Sydney McLaughlin (NJ) show as she went from 6th to the win with her 49.85 (F.A.T.) split on anchor. Don't let that split overshadow a huge split from Team War's Syaira Richardson who went 52.23 to try and hold off McLaughlin.

Finishing fourth in the race was Team War with a 2:07.78 time that beat the previous national record and coming in fifth was Western Branch at 2:08.50.

In the boys' competition Virginia stepped it up even more and went 2-4-6-7-11 with Western Branch, Oscar Smith, Prince George, Bethel, and Nansemond River. Branch was very close to the win and that was in a big way thanks to Micaiah Harris' 45.68 anchor split to bring the Bruins back to a close second in 1:52.82. Oscar Smith finished fourth in 1:53.25 out of section 3/4 having never run this event before and Prince George finished out our All-Americans in sixth with a time of 1:54.35