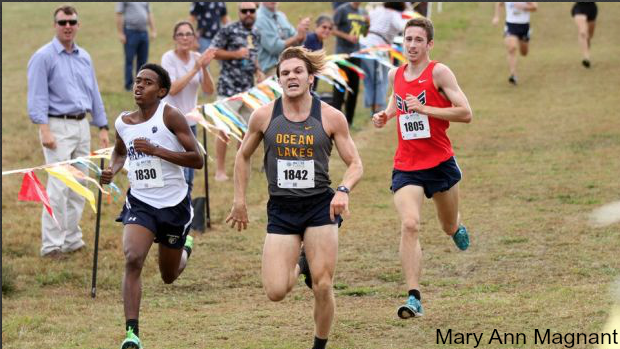 CHESAPEAKE, Va. - With his first group of athletes now upperclassmen, XC coach Ryan Carroll has been able to bring Western Branch back to prominence in the XC scene. This past Thursday that included sweeping the Region 6A team titles and individual gold for Sara Belamarich in the girls' race. Chase Osborne of Branch took second behind Ocean Lakes' Brent Bailey in the guys' race.

Though things were lopsided on the girls' side with the Bruins scoring 53 points to Ocean Lakes' 68, the guys' side of things went down to the line...and even the camera!

Going into the regional championship both squads knew it was going to be close. Ocean Lakes and Western Branch both had strong front-runners and depth to contend for the title. So much in fact that they both made up 70% of the top 10 finishers including 1-2-3-4. And as much as we would like to say we could have predicted the winner we honestly could not have decided a battle this close.

During the award ceremony scores were announced and it was Ocean Lakes on top with 37 points and Branch in second with 38. It wasn't until Coach Carroll heard and saw the results that he knew there was a scoring issue. He filed an appeal and the meet director/timers/meet management all went to look at the identilinx camera footage to see the finishers head on.

After review of the footage the evidence was clear that a Western Branch athlete did finish ahead of Ocean Lakes and thus flipped the scores to Western winning by a point. Coach Carroll and others all said Ocean Lakes handled it with grace and congratulatory remarks.

Regardless though of who won, both will get a rematch at Great Meadow this Friday!