Home to the VISAA State Meet and St. Chris Invite, the St. Christopher's Field House is one of the better facilities in the state. It features a fast 200m surface and solid field event venues that have proved to be quite good over the test of time. This weekend, in this great facility, will be the St. Chris Invitational featuring over 60 teams.

Starting the action off in a big way will be the sprinters and hurdles down the home stretch Friday evening. These races will feature prelims and finals in what should be some close races. The leading athletes in these events are Tania Matthews (James River) in the Girls 55, Matthew Mitchell (Potomac Senior) in the Boys 55mH, and Lauren Yeboah-Kodie (Colgan) in the Girls 55mH. 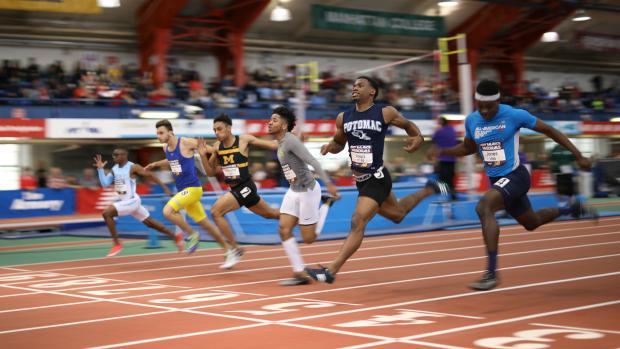 The boys' 55m dash is too close to call at this stage with Bryan Ahouman (Potomac Senior), Donovan Louis (Potomac Senior), and Chris Tyree (Thomas Dale) all slated to compete. It could very well take a near US #1 or better performance to win this one.

The only other track race on the day will be the 4x800m Relays. The Grafton girls will highlight the girls' race with their very fast squad and the boys' race will feature a potential sub 8 battle between Loudoun Valley and Deep Run.

Also on Friday will be both Pole Vaults, both Long Jumps, and the Girls High Jump competition. In the pole vault competition the top seeded competitions are Joe O'Connor (Douglas Freeman) seeded at 15-0 and McKenna Dunn (Midlothian) seeded at 11-9. These two, if their hit properly on all cylinders, should face little tough competition.

The opposite is true for the girls' high jump competition featuring numerous ladies over 5' and quite a few tied for the lead at 5'4".

Finally in the long jump competition we should see some very close battles that will take all six attempts to win. In the girls' competition it should be a battle between Hampton's Jordan Hardy (18-10) and Manchester's Hanna Wynter (19-0). This competition will take place on the runway against the wall.

On the infield runway will be the boys' competition with St. Chris' Frank Royal taking on Potomac Senior's Donovan Louis. Both are consistently jumping 22+ but have yet to hit near perfect marks every time. If one of them can hit one of those big marks you can certainly expect some big things from this competition. 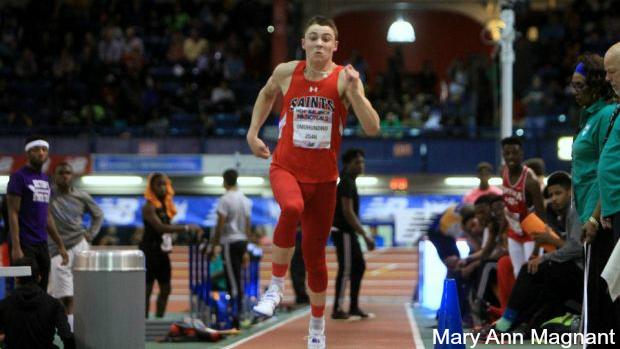 On the triple jump runways it should also be close with two girls seeded over 38' (Grace Yeboah-Kodie and Jordan Hardy) facing off. For the boys it will be St. Chris' Elby Omohundro trying to defend his home track with R.E.L's Chambers and Ashton attempting to upset him. Elby is seeded at 46-2 with both Chambers and Ashton seeded at 46-1 and 45-9.

The final field events will be the shot put competition taking place on the infield Saturday. These two events will be headlined by Highland Springs' Ben Clay III seeded at 54-2 and Battlefield's Destiny Ball seeded at 39-9.5.

In Saturdays' sprint events things won't be slowing down either. The boys' 300 will feature a very fast race between Brebor (Potomac Senior) and Etta (FUMA) who then again face off in the 4x200.

Potomac Senior will then return for the 4x400 where they are favored to win. 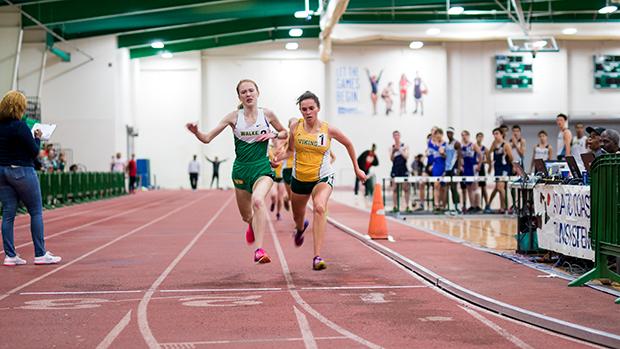 With Loudoun Valley in attendance that surely means some great distance races. Their #2 XC guy, Peter Morris will headline the 3200 and his twin Natalie Morris will seek revenge against Mary Caroline-Heinen (Maggie Walker) in the girls' installment of that race.

The final two events to preview could very well be the deepest and most exciting ones of the meet. The first of which is the 1K featuring Jacob Hunter, Colton Bogucki, Kameron Helmlinger, and Matthias Cannon. It will definitely take close to sub three for the win here.

You can most certainly expect them to push the pace early and late here in what is a race that we are calling way too close to call now.