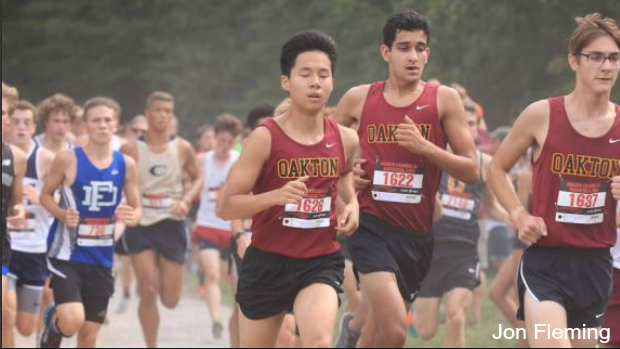 While almost a third of the state was running at one of the fastest and biggest meets of the regular season, the Milestat Invitational, 30 teams headed over to the Albemarle Invitational. Panorama Farms in Earlysville, Virginia, one of the most mentally difficult courses in the state, challenged teams this past weekend with endless rolling hills.

Organized by the Albemarle team, which is building a very strong and well-rounded cross country program, the Albemarle invitational featured jackets for the team winners of the varsity division, a beautifully trimmed course on a farm, and a live score board, which tracked every runner's progress from the mile, 4k, and finish line mark.

This event started off with the girls' varsity division, where another dominant performance from the Blacksburg girls overwhelmed the field. Ailene Edwards and Kaitlynn Wolfe finished 1 and 2 respectively, and 4 of the top 15 came from Blacksburg, making for an 86 point first place finish. Western Albemarle, the team with the tightest spread out of the entire division, finished 2nd, led by freshman Jenna Stutzman. Forest Park and Albemarle finished in a close 3rd and 4th with 160 and 165 points. Personal Records were very hard to come by, especially for more competitive runners. But, from the top 20, Ashtyn Davis, Liza Neely, Meme Zarzyski, and Rachel Hager all left the meet with a new PR!

Joe Hawkes and Jack Eliason from Western Albemarle continued their classic one-two punch finish as they were the only two people to break 16 at the invitational. However, the excitement came from the boy's team race. Albemarle was initially announced the winner of the meet, but a review of the score count revealed that, Oakton, led by Zackary Morse, Ethan Walls, and Scott Sullivan, was the actual winner by one point, 86 to 87. Even though Albemarle finished 2nd, this showing on their home course was scary for anyone in 5A. They had a 29 second split from 1 to 5 and ran nearly as fast as Deep Run or Atlee, on a much harder course. Glen Allen finished out the trophy winners as they nearly edged out Ocean Lakes by 2 points. In the top 20, Jacob Plummer, Riley Fletcher, Ethan Walls, and Garrett Woodhouse came home with a PR!

In the JV girls race, Mari Garza of Blacksburg won, and behind her was Western Albemarle finishing 2 through 6 to accumulate to a score of 20. Blacksburg finished 2nd and Glen Allen finished third in this division with a 14 second spread.

Similar to the boys' varsity race, Oakton nearly edged out Albemarle in the in the JV division, 34 to 39. The top finishers in this race was Jonathon Guo and Lucas Baneriji from Oakton, along with Bryce Latina from Glen Allen, leading his team to a third place finish.

The freshman race division seem to have a strong showing from ironically not freshman, but 8th graders. Alli Crytser of Hanover, an 8th  grader, had a great race of besting the field by almost a minute, running 19:46. While Emma Stanley from Fort Defiance, also not a freshman, finished behind her. Hanover narrowly won over Fort Defiance 47 to 49. Led by Kyle Eaton, Forrest Park's athletes finished 1 through 7 in the freshman race, culminating for a perfect score of 15. 8th grader Carson Ackley of Glen Allen wedged himself in between some tough competition in this race to be the only non-high school student to finish in the top 20.

5A and 6A rivals clashed at this meet for a good pre-state preview as the regular season of racing wraps up. Even though this was not the largest or fastest meet of the weekend, the teams that attended this meet chose to challenge themselves on a course that is arguably much harder than the state course. Teams left this meet exhausted but also excited and fulfilled.