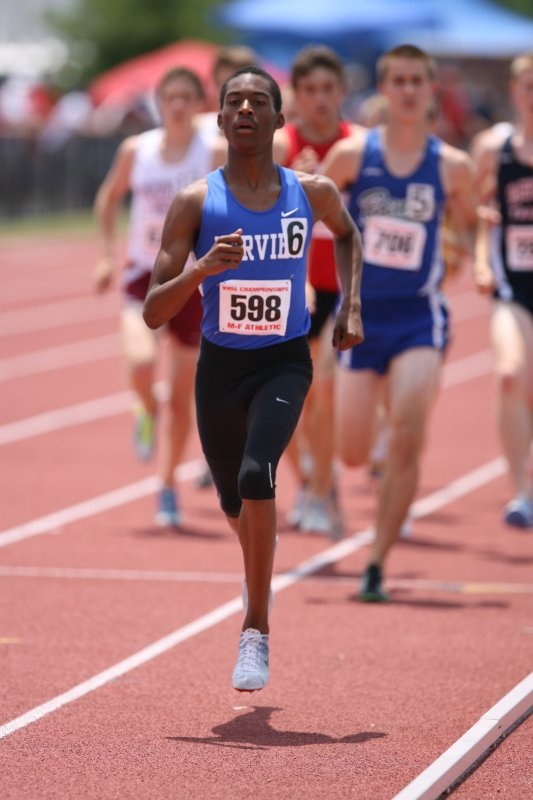 Preliminary rounds of several running events at the AAU Junior Olympic Nationals on Monday saw a considerable group of Virginians advancing onto the finals including sub 4:20 miler and rising senior Marquis Worsley (pictured above by John Herzog) of Norview, who squeaked into the finals as the 11th fastest qualifier of 12 finalists in the young men's 800. Worsley will get the opportunity to improve his position in the finals after his preliminary time of 1:57.26. Worsley has a season best time of 1:55.68 from the Eastern Region Championships in May. A rare sight in an elite distance runner from an Eastern District school, Worsley was also the lone Virginia male athlete to make it into the finals of any event from day three. The Virginia girls had plenty of exceptional performances.

Young Women 100m Prelims - State record holder Keilah Tyson of Western Branch breezed through the first round winning her heat with a time of 11.71. Also qualifying onto the next round from Virginia were Tabb's Kiara Porter (12.16) and Tyson's teammate Taranisha Taylor (12.11). Tyson will be in strong contention to win an AAU national title in this event, which would add to her already historic high school career.

Young Women Triple Jump - George Washington's Lora Wilson (11th, 18'2") and Western Branch's Tiffany Ellick (13th, 18'0") both went over 18 feet, but well out of medal contention in a very deep long jump field with 13 girls over 18 feet. Ellick was the Group AAA state indoor long jump champion this past indoor season and will be one of Western Branch's top returning athletes in 2012.

Young Women 800m Prelims - Indian River's Shannon Morton posted the second fastest time among all 12 qualifiers for the finals with a 2:15.94 performance. Morton is a returning AAU All-American performer at 800 meters from last year's nationals in Norfolk.

Young Women 400m Hurdles Prelims - Former Great Bridge High multi-event star Shakeela Saunders, who is reportedly going to be returning to compete in Virginia again next year after spending the past year in North Carolina, has now become a 400 meter hurdler. Listed from Suffolk, Saunders qualified for the finals in New Orleans with the fourth fastest time at 1:02.50.

Intermediate Girls Javelin Throw - Chelsea Wright of Western Branch had an impressive showing in a rarely contested event in Virginia as she threw for a distance of 93'5", which earned her a 12th place result. Wright, a rising junior, competed in the heptathlon at the New Balance Outdoor Nationals and previously finished 9th at the USATF Club Championships in the javelin with a mark of 88'1".

Intermediate Girls 800m Prelims - L.C. Bird rising sophomore Nichelle Scott, who did not compete this past track season for Bird, clocked a significant six second PR of 2:17.93 to move onto the finals of the event with the 3rd fastest overall time in the prelims. Scott could certainly be a force at the middle distance events within the Central Region next year if she runs for the L.C. Bird track team.

Intermediate Girls 400m Hurdles Prelims - Great Bridge's Heather Smith has continued to develop from her consistent 45-46 second 300 hurdles performances in the spring to be currently running 1:04.09 in the 400 meter hurdles and reaching the finals in her age group at the AAU Nationals. Making the finals in New Orleans is a big step for the Great Bridge rising junior Smith, who failed to make the finals of the 300 meter hurdles at the state championships and Eastern regional meet this past spring.