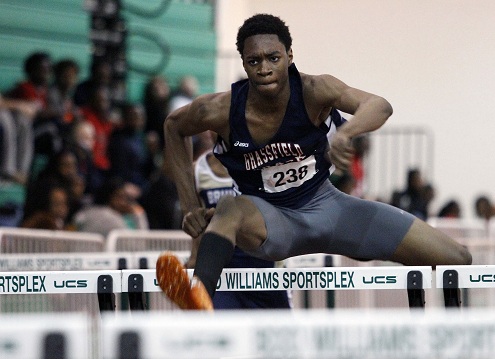 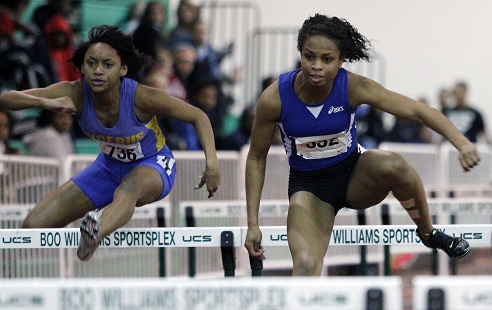 MileStat.com will be on-site with photo coverage from Ryan Kelly. Live results throughout the meet. The hurdles finals on Friday saw historic performances from Grassfield senior Trey Holloway and Landstown junior Leah Lott. Holloway at the Atlantic Coast Invitational, blazed through the hurdles in the finals with a VA #5 all-time performance of 7.28, which currently ties him as the national leader. Meanwhile, Lott joined only 15 other past Virginia high school girls to dip under 8 seconds in the 55 meter hurdles with a VA #12 all-time clocking of 7.99. Current 55 dash state leaders Justin Burke of First Colonial and Taranisha Taylor of Western Branch both came away with victories on day one of the Atlantic Coast Invite, but neither were able to improve upon their season best with winning times of 6.48 and 7.06 respectively. In the field events, Kempsville senior Taylor Frenia was trying to match or better his VA #9 all-time mark of 61'3.25" from two weeks ago in the shot put, but had to settle with a 59'1" winning mark which still is top 20 all-time territory. Lakeland's Anaquan Peterson, a returning indoor All-American in the triple jump, was only a few inches off his season best mark last week at Virginia Tech (47'7") with a leap of 47'3".