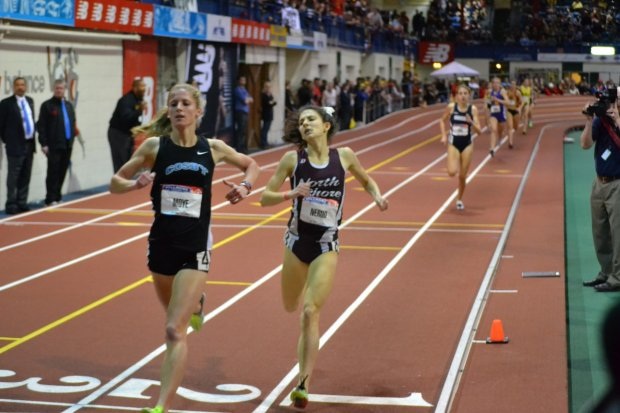 The state of Virginia was well represented in Saturday night's high school girls mile race at the Millrose Games with three Virginians competing between Cosby's Megan Moye, Lake Braddock's Sophie Chase, and Ocean Lakes' Audrey Batzel. The returning Group AAA indoor and outdoor state champion Moye established herself near the front at the start of the race and maintained a top 3 position throughout the race. The furthest which Moye fell back was to fourth place at the quarter mile around 73 seconds, but moved herself up after a 2:27 half mile split. While Samantha Nadel of New York was able to run away with a 4:46 win, the NC State recruit Moye battled with Nadel's North Shore High School teammate Brianna Nerud for second place in the final 400 meters after running just under 3:40 at the three-quarters mark. Moye edged Nerud at the line for a final time of 4:49.95, which was just off her VA #2 indoor all-time mile performance of 4:49.36 from the New Balance Games. 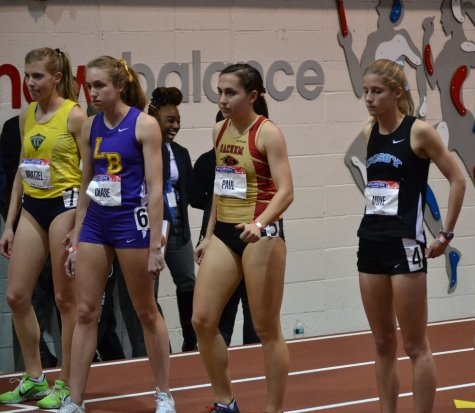 Sophie Chase and Audrey Batzel got stuck in the back half of the field early on, but Chase was able to move up throughout to finish fifth overall in a time of 4:54.14, while Batzel made for three sub 5 minute milers from Virginia in the same race with her 8th place effort of 4:57.56. A mile PR for Chase, which converts to only a tad slower than her 4:52.06 1600 meter PR. Batzel improved her season best time of 4:58.07 from her Hispanic Games race which qualified her for the Millrose Games. The West Potomac girls competed in the 4x800 meter relay at Millrose and their quartet ended up running a time of 9:26.58 for 8th place.