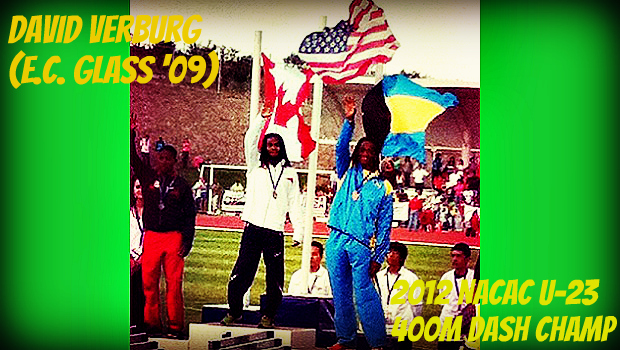 George Mason University's David Verburg, a 2009 graduate from E.C. Glass High School in Lynchburg, this past weekend represented the United States at the NACAC U-23 Championship meet in Guanajuato, Mexico. He represented the United States, George Mason University, E.C. Glass High School, and the state of Virginia well in winning the 400 meter dash against many of North America's top young quarter milers with a 45.14 victory. Verburg is no stranger to gold medals on the international level as he ran a leg on a World Juniors 4x400 champion relay in his freshmen year at George Mason. Verburg, an NCAA All-American this past spring in both the open 400 and 4x400 meter relay, has shown himself more than capable of competing at the next level beyond college as he recently made the finals of the 400 meter dash at the Olympic Trials two weeks ago in Oregon.

At E.C. Glass in Lynchburg, Verburg showed great range in running a 10 second (10.66) 100 meter dash time and a 500 meter dash indoors at 1:04.85. However, Verburg never won an individual state title in Virginia so his later development and success now in college and building towards a likely professional career is remarkable. Verburg could certainly seem himself in four years as being one of the top challengers for an Olympic team spot if he continues to progress like he has lately.

Former T.C. Williams star and current East Carolina University athlete Tynita Butts was also victorious in Mexico as Tynita Butts cleared 5'11.75" to take first in the women's high jump. Butts, a state and national champion in high school in both the high jump and long jump as well as a state indoor record setter in the long jump, recently finished an impressive 7th place at the US Olympic Trials and previously placed 3rd for All-American honors at the NCAA Outdoor Championships. Earlier in the outdoor season, Butts achieved an Olympic "A" standard performance of 6'1.50". Butts will return next year to ECU for her senior year of track.

Another former Virginia high school star, but competing for another country in Haiti which she has dual citizenship with both parents being born and from the Caribbean Island, was Landstown High School product Marlena Wesh. Wesh, a current ACC champion and NCAA All-American sprinter for the Clemson Tigers, finished as a runner-up and silver medalist in the North America, Central American, and Caribbean Under-23 Championships with an impressive 51.23 clocking which broke her own Haitian national record. The 2012 NCAA indoor 400 meter national runner-up Wesh's next plans are preparing for the Olympic Games, which she will be racing under the Haiti flag.