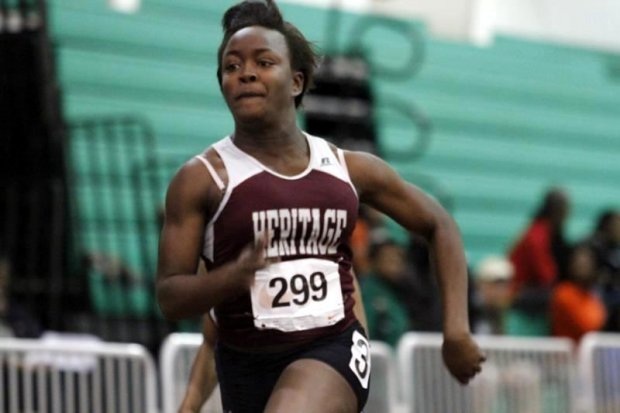 In her first race of the indoor season, Heritage's Asonya Anderson sent some shockwaves through the Boo Williams Sportsplex facility as she broke 7 seconds in the 55 meter dash and defeated returning Group AAA state 55 meter dash champion Carolyn Brown of Phoebus in the process with a US #4 clocking of 6.97 at the final Peninsula District regular season meet. Her performance ties her for #8 all-time in Virginia high school indoor history. The Jamaican-born Anderson had not run in a race all-season long with her last race being a fourth place 11.99 personal best finish in the 100 meter dash finals at the 2012 VHSL Group AAA State Outdoor Championships in Richmond. Racing against the state's fastest in another sub 7 second performer in the 55 dash in Phoebus sophomore Carolyn Brown, the Heritage junior Anderson has now shifted the momentum in her favor at least temporarily at the start of championship season. Brown, who clocked a time of 7.10 for second place in the 55 meter dash, came back strong later in the 300 meter dash to win in a season best time of 40.44.

There were some impressive marks by the Peninsula District athletes in the jumps. Woodside's Aaron Worrell (46'11.75") and Hampton's Anton Moore put on a competitive duel in the boys' triple jump with both well over 46 feet, while Kecoughtan's Kyla Sanders achieved a new personal best mark of 37'9" in the triple jump. Denbigh's Darius Banks has won four of five meets at Boo Williams this winter in the long jump with his most recent mark of 22'4.25" on Wednesday.

Bethel sophomore Ashley Greenlee is arguably the top athlete on one of the state's perennial track powers at Bethel this indoor track season and she shined in her specialty of the 500 meter dash with a new personal best time of 1:18.77.