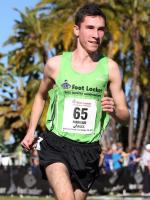 Eight VA #1's and Many Meet Records, Southern Track Cla...
In its fifteenth year of being run, the Southern Track Classic did not dissapoint. With great afternoon weather it seemed as though it was going to be a perfect evening but the weather did not stay th...

Interview with Foot Locker finalist Mackenzie Haight of...
All season long, Mackenzie Haight of George C. Marshall had to take defeat after defeat at the hands of Louis Colson. A total of 9 races to be exact that Haight raced against the state&#39;s be...