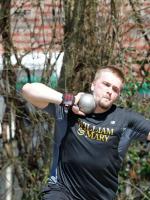 Atlantic Shores' Troy Yearwood Is Looking To Put His Wa...
Troy is entered in the shot put competition where he holds a strong lead over the competition with his season best 57-7 mark. That ranks him VA #3 overall and leads the VISAA competition by 11'1"....

MileStat.com Elite Top 50 Boys Outdoor T&F Rankings (6/...
With States only hours away it is time to get one good look at the leaderboards and event by event rankings before they are completely rewritten. With six state meets, each and every leaderboard shoul...

VISAA State Meet Coverage Central...
Your one stop coverage location for all things related to and coverage of the 2014 VISAA State Outdoor T&F Championships....

MileStat.com Elite Track Classic Preview...
It is quite the week to be a fan of Virginia high school track & field.  While many schools will make the trek up to Philadelphia for the Penn Relays, Sports Backers Stadium in Richmond will play hos...

MileStat.com Elite Top 50 Boys Outdoor T&F Rankings (4/...
After the first week of real invitationals and local meets the entire state leaderboard and rankings were nearly entirely rewritten. This list features the top 50 boys in each event including relays.�...