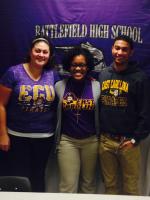 Over 3,000 Photos! Photo Coverage of 6A North By: Lisa ...
MileStat&#39;s Lisa McArthur was hard at work taking thousands, yes thousands of photos of nearly every competitor at the 6A North Region Championships. Check them all out here where we have highlight...

MileStat.com Elite Top 50 Girls Indoor T&F Rankings (3/11)
A list of the top 50 high school girls performances in each indoor track & field event in the state of Virginia regardless of classification as of March11th, 2014 according to performances & results e...

Top Event Performers in Each Classification for Virgini...
A breakdown of the top high school event performers for each classification in the state of Virginia (6A, 5A, 4A, 3A, 1A-2A, and private) as of January 13th in the 2013-2014 indoor track & field seaso...