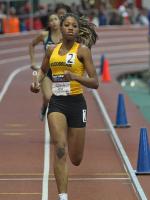 Three Champions and Two State Records! Penn Relays Reca...
In a meet where more athletes compete then the modern Olympics, Virginia athletes did a fine job of making sure they were noticed. This included three champions, two state records and some very impres...

Indoor Previews: Top 50 Returnees for Group 6A Girls...
A list of the top 50 indoor track & field returnees per event among Group 6A girls. The Woodbridge girls return virtually everyone from one of the state&#39;s fastest 4x400 meter relays indoor and out...

Virginia Girls Among Top 500 in National Outdoor Rankin...
A list of Virginia girls ranked among the top 500 nationally and anywhere around the top 0.5% best in their respective events in the United States from this past outdoor season. The Woodbridge girls 4...

Group AAA Gallery of Outdoor T&F State Champions...
A gallery of all the state champions (teams, relays, and individuals) from the 2013 VHSL Group AAA State Outdoor Track & Field Championships held May 31st and June 1st at the Todd Stadium in Newport N...

Group AAA Girls State Meet Preview...
The indoor state team champions South County will be strong favorites to become outdoor state champions as well with one of the greatest and most versatile athletes in Virginia high school trac...