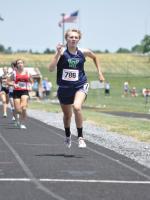 Athlete Spotlight: Audrey Houghton...
Loudoun Valley sophomore Audrey Houghton has to do a quick turnaround between her top two events of the 400 meter dash and 800 meter run with the 300 meter hurdles as her only break to separate her ...
5/1 Weekend Coverage: Hunter 7-3 HJ + 3 wins,Tyson 11.7...
Photo by Ryan Kelly A busy weekend of meets in Virginia which included a very hot Saturday with temperatures rising over 90 degrees, but the performances went up another few degrees as well includi...
Cedar Run District Championships Virtual Meet Preview...
The Cedar Run District looks much different this year with Osbourn Park having moved into the Cardinal District and Heritage High School in Leesburg moving up into the Group AAA district. With no Osbo...