The Manchester boys and Cosby girls from the Dominion District claimed the final Central Region Indoor Track & Field Championship team titles this past weekend at the Arthur Ashe Center in Richmond. The Manchester boys (88 pts) were able to pull away decisively and build up a lead in the field events from early meet challenger Highland Springs (3rd, 55 pts) before Midlothian (2nd, 57 pts) pulled in late for runner-up honors. Patrick Henry girls had the lead for much of the meet on Friday and Saturday, but the Cosby girls were able to summon a last surge of 21 points from the 300 meter dash to put them over the top of the Colonial District champions. 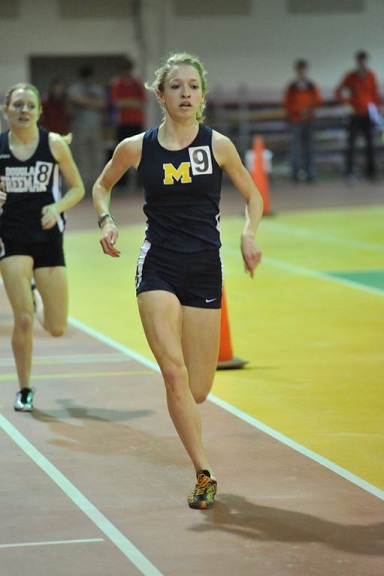 The last Central Region Indoor Meet did not finish without at least one meet record being established forever. In the girls 1000 meter run, Midlothian's Tessa Riley (pictured right by Tom Veazey) was pushed to a new meet record time of 3:02.18, which is a remarkable time inside the 145 meter and spikeless surface at the Arthur Ashe Center. Riley had competition and needed to run that fast to win with Douglas Freeman senior Sarah Thornhill (2nd, 3:02.85) and Maggie Walker freshmen Emma Call (3rd, 3:03.98) breathing down her neck.

Kerr and Thornhill teammed up on Friday night on the Douglas Freeman 4x800 meter relay to roll out an impressive 9 second margin of victory with their performance of 9:52.37. Their team will likely be competing in the slow section at state meet, but don't be surprised if Freeman challenges for a time close to 9:30 or faster and places well overall at Boo Williams next weekend with a relay featuring a sub 3 minute 1000 runner in Thornhill and 1:15 500 meter runner in Kerr.

After popping an early season state auto qualifying time in early December for the 3200 meter run of 11:10, Rachel Galton of Maggie Walker had some up and down races coming back from winter break. In typical Galton fashion from season's past though, she came ready to race in championship season. Galton was a double regional champion on Saturday as she nearly beat her season best 1600 meter time in the Ashe Center with a 5:17.77 win. Later in the 3200 meter run, Galton got a race from Glen Allen's Katie Sperry (2nd, 11:24.63), but was able to put together a strong kick to pull away for her second Central Region title of the day in a 11:19.91 performance.

Henrico sophomore Lachyna Roe is a new name and star emerging from the Central Region. Following a leap of 37'1" last week to win her first district title at the Colonial District Meet, Roe claimed her first regional title by less than an inch over Meadowbrook's Courtney Lawson (37'8.50") with her winning mark of 37'9.25". Her success this winter should not come as much of a surprise after her finish to last outdoor season as a freshmen. Roe was a district champion last spring as well and finished third at the Central Region Outdoor Championships with a personal best mark of 38'9.75" before earning All-State honors with a 6th place finish in the AAA State Meet finals.

Dinwiddie junior Brittany Person looked to be the favorite in the 55 meter dash finals after posting the top time in the prelims at 7.40, while multi-event star Moseley of Cosby also figured to be in the mix as well with a 7.47 prelim clocking. However, neither Person and Moseley were the fastest in the finals as Clover Hill junior Diana Young had a breakthrough race to beat both and win her first regional championship in a 7.43 clocking. Young had posted a 7.29 earlier this season, which tied for the region's fastest this season with Person.

After Jessica Shelton jump started the second day of running events with a successful defense of her regional 55 meter hurdles title in a 8.61, the Patrick Henry girls did not have any individual winners on the track to help them keep pace with a late rallying Cosby squad, but they were able to sweep the sprint relays in the 4x200 (1:51.85) and 4x400 (4:12.64). Without state auto qualifying times in either event, Patrick Henry needed to load up both teams to secure their spots in next weekend's state meet. Both relays featured freshmen sprint star Tiffany Harris, who placed second individually in the 300 meter dash behind Moseley at 42.42.

Shania Williams was three feet below her season best in the shot put with her best mark of the day at 38'8.75", but the Patrick Henry junior was still nearly three feet better than the next best in the region in J.R. Tucker's Denise O'Rourke (36'10.50"). Fifth in the 2012 VHSL Group AAA State Indoor Championships, Williams will be one of the top seeds and contenders coming in Hampton next weekend in the girls' shot.

Matoaca junior Brianna Hayes sets the bar high for herself each time that she competes and she had herself from a year ago to compete against after all the remaining competitors in the girls' high jump went out at 5'4". Hayes cleared 5'6" next, but was unable to clear any higher and challenge her own meet record clearance of 5'8.25" from last year. Hayes will be one of the favorites to win and repeat as Group AAA state champion next weekend in the high jump. 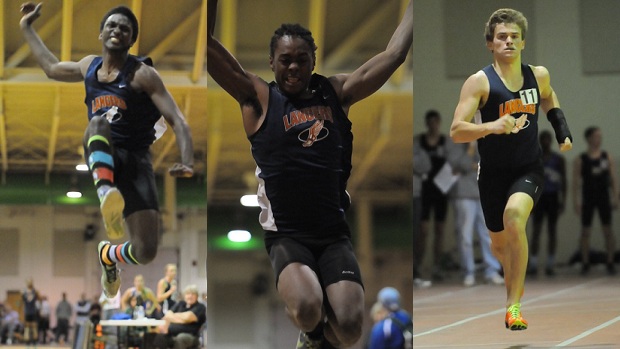 Finishing fifth in the triple jump was teammate Michael Averett, who was able to edge out Midlothian's Will Kendall and Manchester teammate Corey Devore for the high jump title, who all cleared 6'3" like Averett. Earlier misses gave the advantage and first place for Averett though, while Kendall and Devore had no tiebreaker to force them to share second place in the event. In the long jump, Micah Todd of Manchester improved his personal best by 9 1/2 inches to out leap a young talent in Colonial Heights sophomore Christopher Charleston (2nd, 22'6.50") for the Central Region crown in 22'8.50".

The biggest surprise and boost for Manchester in the field events came from thrower David Thompson, who coming into the meet was seeded sixth and was probably more worried about just cracking into the top 6 and advancing onto the state meet. On his final throw in the finals, Thompson leap-frogged himself into first place and a regional title with a 5 1/2 foot improvement from his previous personal best (48'11.75") with a 54'4" shocker to the rest of the field and pre-meet favorites.

Deep Run boys won their first regional title in the 4x800 meter relay as it came down to two of the region's best middle distance runners on anchor leg between Deep Run's Matthew Novak and Atlee's Griffin Carmichael. Novak brought home the title to Deep Run in 8:28.49, while Atlee running short-handed without Nathaniel Hall placed second at 8:29.44. Douglas Freeman secured the last state meet away from Maggie Walker in 8:31

The 4x800 meter relay races may have taken something out of both Novak and Carmichael as neither performed up to par the next day in the 1000 meter run with Carmichael as the top seed at 2:34.64, while Novak as the defending regional champion. Both Hermitage's Devin Barnes (2:43.36) and Varina's Darrick Thornhill (2:43.46) defeated Carmichael and Novak in the fast section of the 1000 meter, but Manchester sophomore Ben Taminger stole the regional title from the slower section with a time of 2:43.24. Taminger was one of the fastest middle school distance runners to come through Chesterfield County two years ago, but injuries as a freshmen had prevented him from showcasing his talent until really now. His 10 points certainly helped his team's cause as well.

Novak was also doubling back from a tough 1600 meter race earlier, which he placed third in 4:33 as two seniors finished ahead of the Deep Run sophomore in Midlothian's Andrew Gorsuch and Douglas Freeman's Ian Macdonald. Gorsuch was able to impressive beat his season best on a 200 meter track on the Ashe Center's 145 meter track with a time of 4:30.71 for his regional victory. Freeman's Macdonald almost earned his first regional title in second at 4:32.41.

Douglas Freeman's Ronnie Calkins won his third straight 3200 meter regional title after winning the indoor and outdoor regional races in 2012 with one of the fastest times ever in the Ashe Center at the distance with a 9:37.25. The hot pace which Calkins set help lead four others under 10 minutes in the race including Deep Run's Grayson Reid (2nd, 9:48.94), Deep Run's Alexander Varon (9:49.14), and Midlothian's Randy Hahn (9:59.64).

Runner-up at last year's regional, Travis Phillips of Patrick Henry became a champion this year in the 55 meter hurdles. Tough for athletes to run close their personal bests especially in the straightaway races without spikes, but Phillips was able to run within one tenth of his personal best of 7.54 in the finals as he dominated the competition with over 2 tenths of a second buffer in his 7.63 clocking.

Highland Springs boys produced much of their points from the sprints led by sophomore Marcus Taylor. Taylor, one of the state's fastest in the 55 meter dash, clocked a 6.65 in the finals to defeat district rival Wesley Jones (6.73) of Lee-Davis. The team which later overtook Highland Springs for second in the team standings in Midlothian, actually scored more points in the 55 meter dash with 2 of the top 4 finishers in John Gerard (3rd, 6.75) and Daniel Jackson (4th, 6.77). Highland Springs' Taylor was found shortly after the 55 finals running second leg for Highland Springs in the 4x200 meter relay to put them out in the lead onto a 1:39.72 time for first place in the event.

Michael Kokal of Cosby was the top seed in the 500 meter dash by nearly 2 seconds and dominated the fast section of the event as only one runner in that section was able to hold onto for a top 6 overall place to advance onto the state meet with Kokal breaking them down in his 1:09.72. Varina's Desmond Dowling tried to be the spoiler from previous slower section with his time of 1:10.47 to finish as the regional runner-up. Kokal and Dowling were both featured later in the 4x400 meter relay in the fast section of the event with Dowling getting his Varina out well on opening leg, while Kokal was able to take the lead for good for the Cosby to win an impressive Ashe Center time of 3:38.07. Varina, anchored by 1000 meter state qualifier Darrick Thornhill, held on for second place in 3:39.56. Midlothian finished third overall in winning the previous section in 3:41 to qualify for the state meet and surpass Highland Springs for second in the team standings.

Dowling was a runner-up twice on Saturday in the 500 meter dash and the 4x400 meter relay, but experienced the joy of first place and a regional title in the 300 meter dash as he dueled it out with the clock in order to best the time of 37.86 posted by 55 meter dash champion Taylor of Highland Springs in the fast section. The Varina junior Dowling clocked in at 37.68 in the second fastest section for the fastest time overall and lay claim the 300 meter dash title.

Zach Campbell of Douglas Freeman is one of the few Central Region athletes who will have a serious legimate shot at a state title next weekend at the Boo Williams Sportsplex in Hampton as his 14'9" season best clearance in the pole vault ranks first by himself in Group AAA. A clearance of only 13'6" was required of the VMI signee Campbell to win the Central Region Meet this past weekend with Maggie Walker' Brennan Kunka (2nd, 13'3". as the only other vaulter in the region able to clear over 13 feet.