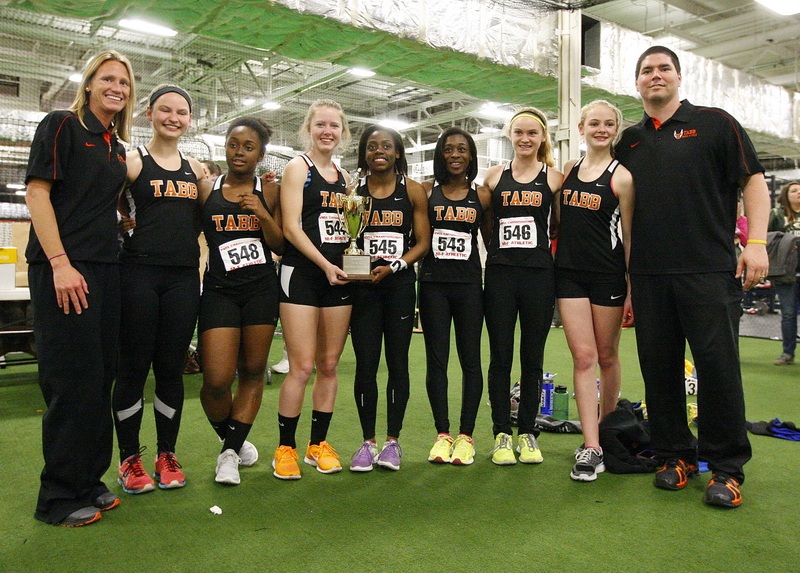 There will be a state championship meet at Liberty University next year, but instead of the current Group AA classification hosting its indoor state meet at the Tolsma Track Center in Lynchburg, four classifications will be competing with 1A-3A combined and 4A competing separately in the new 6 classificaiton system to be implemented by the Virginia High School League public schools. In the final Group AA state indoor track & field championship meet, the Tabb girls returned back to the Peninsula with the state team title trophy. 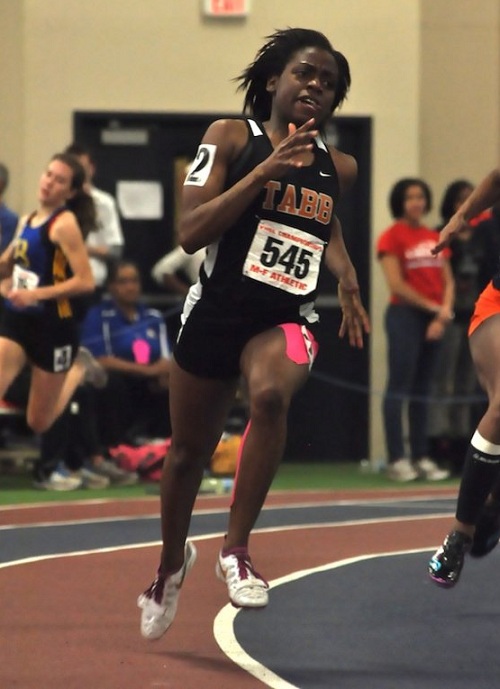 After Tabb junior Micah Hanks swept the sprint events (55, 500, 300) at the Region I Championships, teammate Brittni King had to take sort of a backseat in the spotlight to Hanks, who expected to lead the Lady Tigers as top point scorer at the state championships. Hanks had a solid meet including three place finishes in competitive 55 meter dash (7.16) and 300 meter dash (40.77), but King really took charge to help Tabb (56 pts) distance themselves from Region IV champions Blacksburg (45 pts) as finishing runner-up in the 500 meter dash with a 1:16.89 PR and claiming her first state title in the 300 meter dash as the top seed in a 40.31 clocking. 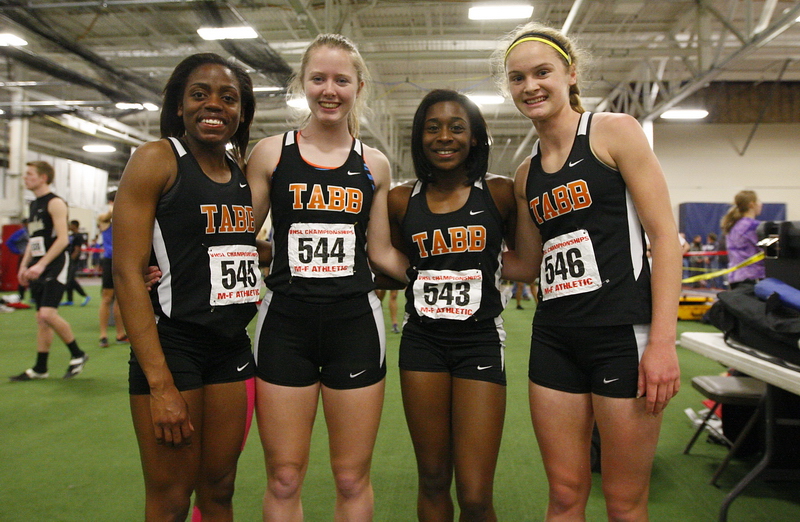 With the team score at 46 points for Tabb and 43 points for Blacksburg entering the final event of the meet in the 4x400 meter relay, King and Hanks were counted on again to return to the track with a strong performance. The Tabb girls have been one of Group AA's best in the sprint relays over the past several years and 2013 was no exception as there was thought that they may challenge to the meet record and dip under 4 minutes, but neither happened although they secured a much needed 10 points in a four second victory over Northside (4:06.06) with a final time of 4:02.03. Blacksburg finished 7th and only picked up two events in the 4x400 to allow Tabb's margin of victory to increase from three points to 11 points in the final team standings. 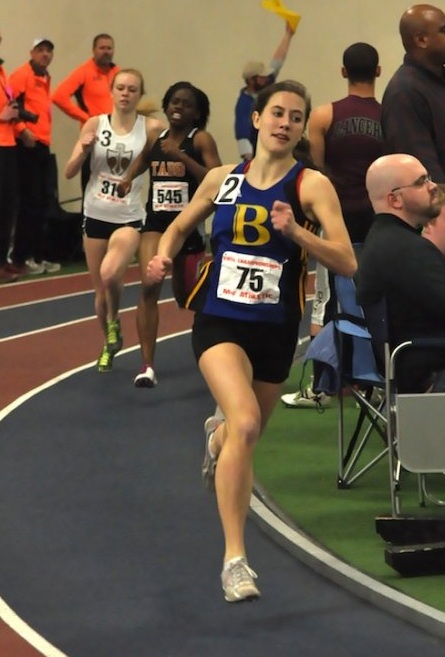 Blacksburg girls almost always have a distance state champion, but they were shut out from first place in the three individual races (1600, 1000, 3200) or the 4x800 meter relay as their top runner Bonnie Angermeier was missing from the state meet. Their top performer came in the sprints in junior Kendell Wiles, who was the only meet record breaker in the girls' portion of this year's state indoor championships. Wiles, ranked US #4 in the 500 meter dash with her season best of 1:14.20 at Virginia Tech, was able to runaway from a field including state champions in Carolyn Bethel of Hidden Valley and Brittni King of Tabb in a new meet record performance of 1:14.85. Bethel finished second in the race with a time in the 1:16 range, but was later disqualified due to a judgement call on her impeding another runner on a turn. 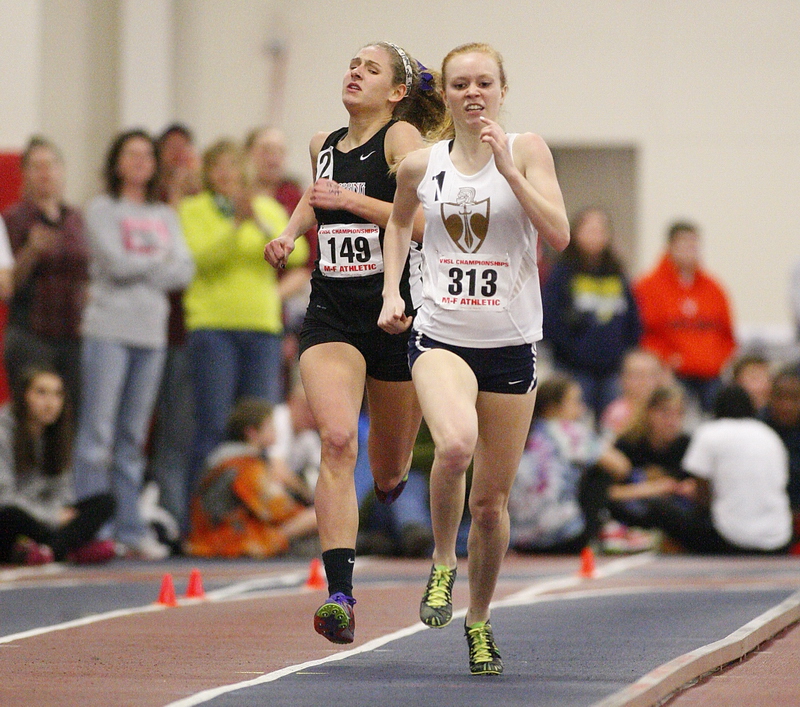 If Bethel was not disqualified, the results would have much better shown an amazing triple produced by the Northern Arizona signee who raced in three back-to-back events in the 1600, 500, and 1000. The 1600 meter run turned out to be a strategically slow race between two familiar runners who have ran 10-15 seconds when going for time instead of titles, which played into Bethel's favor as she tried to conserve energy for her next two races in close time proximity. It was not nearly the photo finish as last year between herself and River Ridge district rival Katie Fortner of Cave Spring, but it was still a battle with Bethel repeating as indoor state champ in 5:03.27 and Fortner as state runner-up in 5:04.77. The next runners were 10 seconds behind in the race and the same separation existed between the two later when they met and the rest of the field in the 1000 meter run. Fortner wanted to force the issue and pace with Bethel who was coming off a 500 in between their last battle, while Bethel likely wanted to take out some frustration from debate-able disqualification in the 500. The result was another race down to the wire between the two, but much quicker race than the 1600. Bethel again had the better gear shift in the final kick for her second state title of the meet in 2:53.44, while Fortner ran just off her personal best in second place at 2:53.99. A remarkable triple by Bethel (even with the DQ) to run a 2:53 1000 after running the 1600 and 500 shortly before. 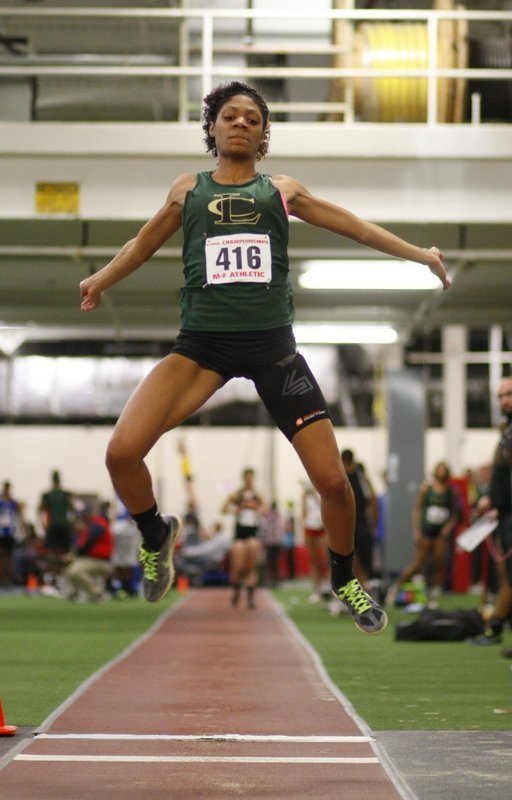 Only Louisa County's Javanique Burruss won more titles than Bethel on the day. Burruss is currently the state's active leader in career state titles as she raised her overall total to nine after snagging a trio of first place medals on Saturday in Lynchburg. Burruss was in a class by herself on the runway in the horizontal jumps as her marks of 18'4.50" in the long jump and 37'9" in the triple jump put her a foot or more better than the second place performer in each event. Burruss, who has signed a scholarship with the University of South Carolina, is also an excellent hurdler and added to her collection of state titles in the hurdles with a 8.18 clocking  to crush the finals field with Caroline's Jessica Tolliver as the runner-up at 8.60. Her 30 points individually and running a leg on Louisa County's fifth place 4x200 meter relay helped her squad earn the third place trophy with 36 points overall. 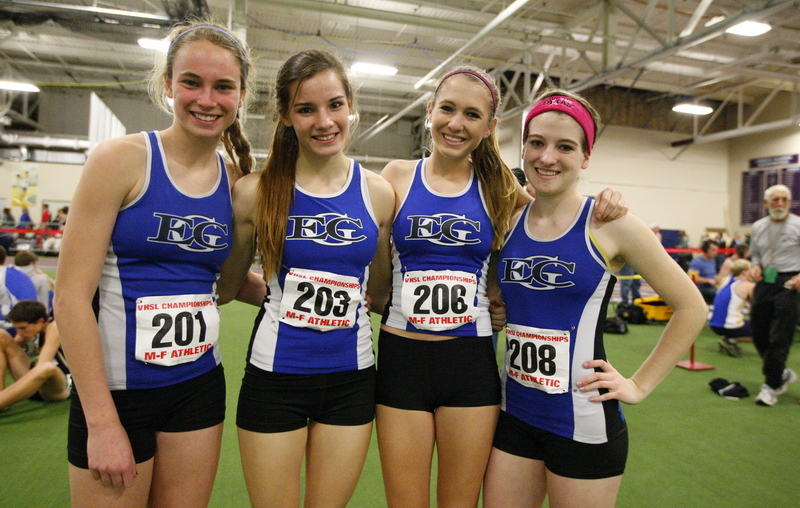 The 4x800 meter relay was an exciting and deep race as 6 teams dipped under 10 minutes and many found themselves in contention in the last two legs, but E.C. Glass loaded up their relay to go for the win and got it with a time of 9:49.75. They were followed by Bay Rivers District squads Grafton (2nd, 9:52.23) and Jamestown (3rd, 9:53.29). The Bay Rivers District was well represented later in the 3200 meter run as Bruton junior Carley Shannon became the district's first state indoor champion in the girls' distance races with a victory time of 11:20.73. 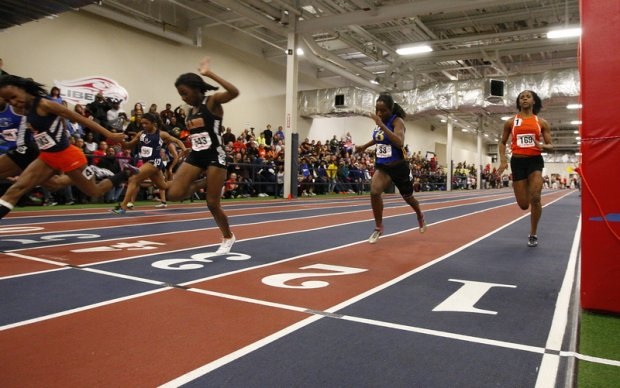 Heritage sophomore Latrice Morris has set herself up to potentially become a four-time state champion in the 55 meter dash as she successfully repeated as the state winner in one of the more anticipated races of the meet featuring two state champion caliber sprinters in Blacksburg's Alyn Carr (4th, 7.31) and E.C. Glass' Zakiya Bateman (2nd, 7.11) as well as emerging star in Tabb's Hanks. It ended up coming down to the finish between Morris and her regular district opponent in Bateman as only one hundredth of a second separated the two Seminole District sprinters with personal bests for both, but Morris becoming the two-time state champion at 7.10. 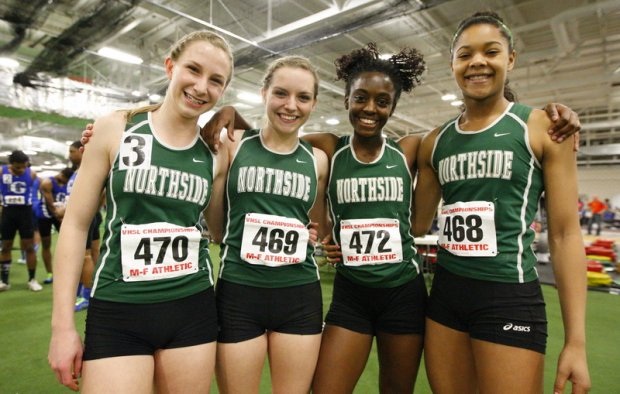 The Northside girls were really stout and fast in the sprint relays with their 4x200 meter relay winning by almost two full seconds in a 1:46.41 performance, while their 4x400 meter relay concluded the meet in second place at 4:06. The McGowan sisters, Annie (senior) and Bonnie (sophomore), were featured on both relays as well as junior Tierra Saunders running anchor leg for both squads. 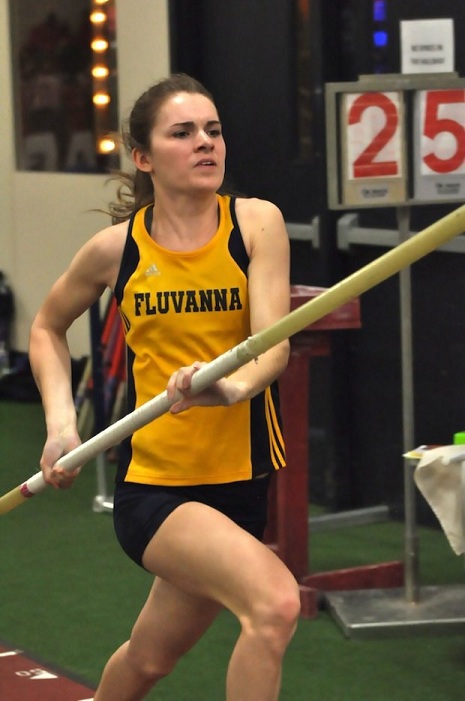 11'6" was a consistent height for Fluvanna County junior Hannah Meador this winter  as one of the state's best pole vaulters cleared the height in a total of six meets including for the Group AA state title on Saturday. Most female vaulters would love to reach such a height, but 11'6" is a baseline for Meador who cleared 11'9" as a freshmen and reached her greatest height of 12'8.50" last year as a junior. She may need a challenger to push her back over 12 feet, which she may start getting in her own district from Western Albemarle freshmen Katrina Barredo who went over 10'6" to become the state runner-up. Barredo was remarkably one of four All-State vaulters from her school in the meet, who all cleared of 10 feet. 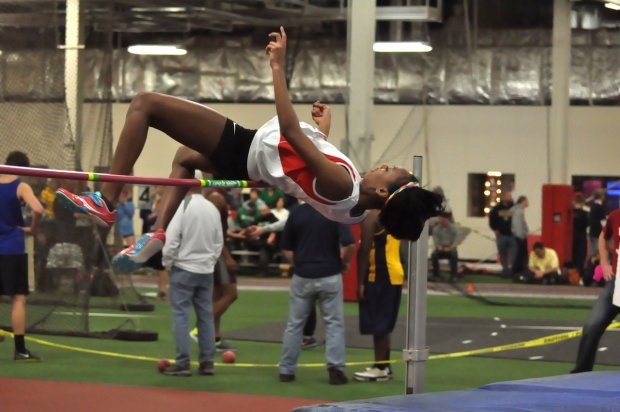 In other field events, Sydney Anderson of Pulaski County found herself in a much tighter competition than expected in the high jump as the top seed at 5'6" was only able to clear over 5'4", while Cave Spring senior Martina Zimmerman had a breakthrough state meet to raise the bar 4 inches higher than ever before and clear 5'4" as well. Warhill's Erika Bridges joined Zimmerman and Anderson clearing 5'4", but none were able to clear the next height and earlier misses by Bridges and Zimmerman gave the tiebreaker and state title to Anderson, who was competing on an injured hamstring and prevented her versatility to be shown in other events. Anderson's teammate Sarah Wright was attempting to be Pulaski County's second field event winner at the state championships as the top seed with a 39'3" season best, but Region I champion Younique Morgan of Brunswick Senior had the better day and throw at 38'8.50" for first place and Wright settling for a state runner-up mark of 38'00.75".