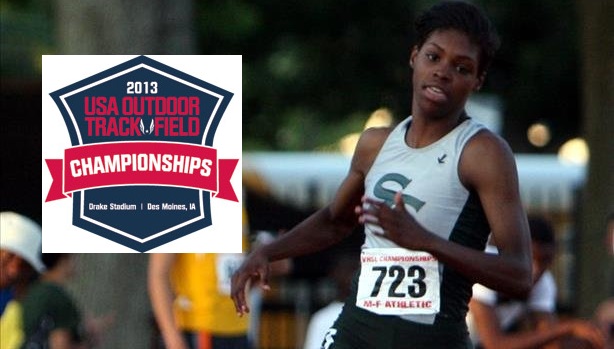 Coming off a state record breaking and national champion performance of 8:45 in the two mile at the New Balance Outdoor Nationals this past Saturday, Chantilly's Sean McGorty will now try to continue his magical senior year by making the US team in the Pan Am Games at 1500 meters. McGorty's personal best in the mile from his Penn Relays record breaking run of 4:04.47 converts down to 3:46.43 for the metric mile at 1500 meters, which puts him ranked 3rd in the meet this week in Des Moines behind only NC State's Craig Engels (3:45.51) and future Stanford University teammate Justin Brinkley (3:46.13). McGorty will be certainly in contention for the win and automatic spot on the US Junior national team.

Felecia Majors skipped the New Balance Nationals this past weekend in Greensboro as well deserved two weekend break from competition after helping lead the South County girls to outdoor state title as she did indoors competing in 7 events individually. She will be competing in the lone event which she was able to win an outdoor state title in this spring in the 400 meter dash as her personal best of 53.65 from the state meet. The time ranks her #6 in nation and seeds her 5th coming into this meet as the entrants ahead of her are collegiates at the USATF Junior Nationals. She also will be competing during the same time frame as her 400 meter dash preliminary heat on Friday in the women's long jump, which the Penn Relays champion in the event has a much better chance to make the Pan Am Games junior team in this event compared to the 400 as her personal best mark of 20'3" gives her a 6 inch buffer on the next best entrant.

The USATF Junior National Championships are often reserved for primarily college freshmen and high school seniors at the top end of the age range eligible to compete at the junior level internationally, but don't tell Forest Park junior Ricky Morgan that. Morgan is looking to continue his great streak of races at the end of his outdoor season in the 400 meter dash. The US #10 performer in the event after a stellar All-American finish this past Sunday in Greensboro at the New Balance Outdoor Nationals with a 46.67, Morgan is setting himself up well for an even bigger senior year of high school. The experience and exposure from competing as a junior in this meet (seeded 6th with his previous PR before NB Nationals at 47.04) will be a great advantage for next year if he choses to return to the meet. The 2031 Group AAA state outdoor 400 meter runner-up (to 3-time national 400 champ Michael Cherry) Morgan also ran a leg last weekend at outdoor nationals on the Forest Park boys' state record breaking 4x100 meter relay, which finished as national runners-up by a hundredth of a second at 40.55.

In the junior women's 800 meter trials, two Virginians will be making the long trip out to Drake University. Two state champion half milers in Group AAA winner Ellison Grove of Battlefield and Private School winner Micah Brickhill of Liberty Christian Academy. The Battlefield junior Grove is coached and trained by another former USATF Junior National champion in Alisa Harvey, who continues to work with her after coaching her last spring as a coach at Battlefield. Micah Brickhill has graduated from Liberty Christian Academy this spring and will now be moving onto collegiate running at UVA in the fall, so why not prepare and get a feel for the next level of competition by competing against some of NCAA's top freshmen at the 800 meter distance from this past spring? Grove is the state leader from this outdoor season with her 2:11.38 victory at the Southern Track Classic, while Micah Brickhill is ranked fourth in the state from her meet record 2:12.38 at the MileStat.com Elite Gala. Both will be looking to improve upon their personal bests this week in Des Moines facing faster and tougher competition with many collegiates as they will need to in order to advance out of the semi-finals into the finals as the 19th (Grove) and 23rd (Brickhill) fastest entrants.

MileStat.com would like to thank these 5 athletes for deciding on competing at the USATF Junior Nationals and encourage our state's returning elite (and their coaches) for 2014 track season to consider this national championship in their post-season plans. An opportunity to represent Team USA is not to be overlooked.

In case you wanted to know what it takes to qualify for the USATF Junior Nationals for future reference, here is this year's meet qualifying standards...