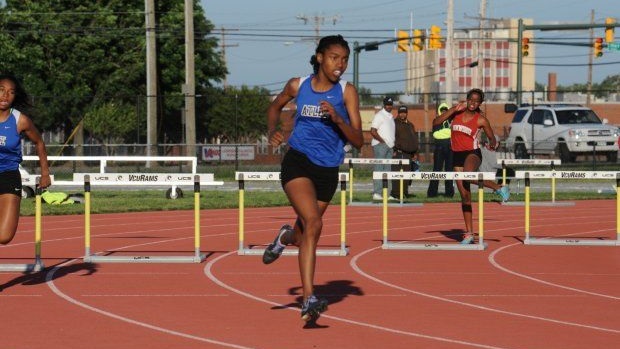 A small group of Virginians traveled down to Orlando, Florida this past week to compete at Disney's Wide World of Sports Complex in the AAU Club Nationals. Atlee rising junior India Lowe and Grassfield rising sophomore Grant Holloway both claimed victories down at Disney, while T.C. Williams rising sophomore Josephus Lyles clocked a sub 48 time in the 400 and nation's leading time among 9th graders in the event.

Atlee's Lowe, who made a late season surge to finish as a state runner-up in the Group AAA State Outdoor Meet with a 42.84 PR in the 300 meter hurdles followed up by a 1:01.09 PR in the 400 hurdles at the New Balance Outdoor Nationals, continued her great racing with a 1:02.46 win in the 400 meter hurdles for the 15-16 age group at the AAU Club Nationals. Lowe also ran a leg on the winning 1600 meter sprint medley relay with two other Central Region athletes in Henrico's LaChyna Roe and Hermitage's Haley Berkeley.

Grassfield's Holloway, who this past week was selected as the MileStat.com freshmen of the year in indoor track, was an AAU Club Nationals champion this past weekend in two events with a 6'7" clearance in the high jump, while achieving a new personal best clocking in the 110 meter hurdles at 14.33 for the 15-16 year old age group.  Holloway had a busy weekend competing in numerous events as he also finished third in the long jump (21'10") and 5th in the 100 meter dash (11.25)

While his brother was out in Ukraine competed at the World Youth Championships, Josephus Lyles was down in Florida competing at the AAU Club Nationals. His brother earned a silver medal as a member of the Team USA medley relay at the World Youth Championships, while Josephus was a runner-up twice in Florida including a new personal best time of 47.72 which might be the fastest time ever recorded by a freshmen in state history and ranks as fastest in the entire nation among 9th graders this outdoor season. Lyles had a great double with a 21.88 clocking in the 200 meter dash clocking to add to his 400 PR race.

Other noteworthy Virginia high school performances include Warwick's Ian Barrett posting a time of 49.38 in the 400 meter dash and Henrico's LaChyna Roe achieving marks of 17'8" in the long jump and 37'10.25" in the triple jump.