Coverage below from Saturday's Chancellor Invitational at Loriella Park in Fredericksburg. Complete results, race videos, and meet summary posted, while two race photo galleries will be uploaded by late Sunday. 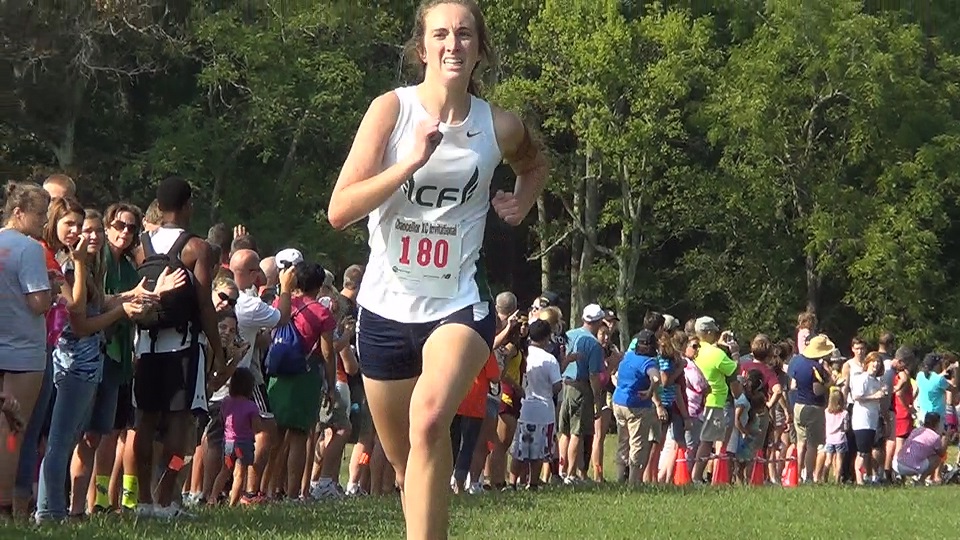 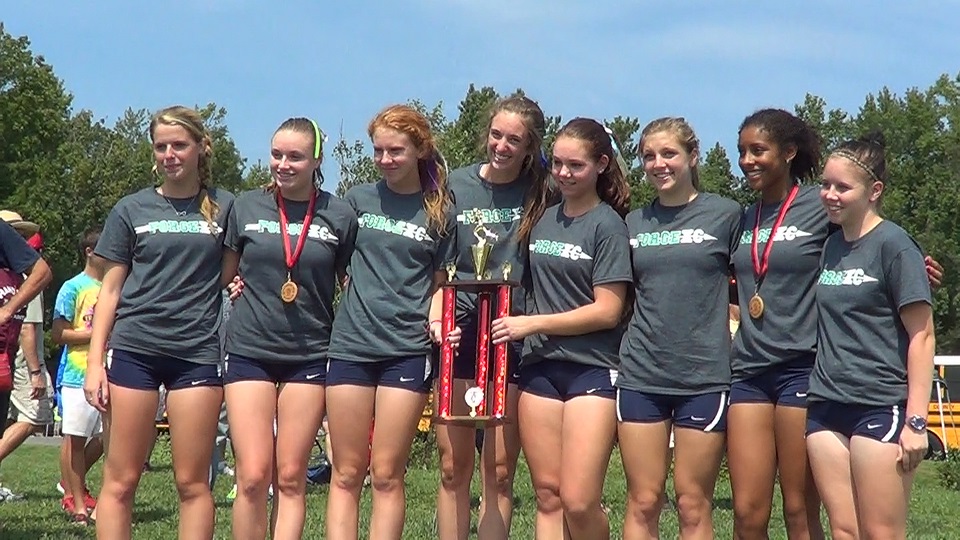 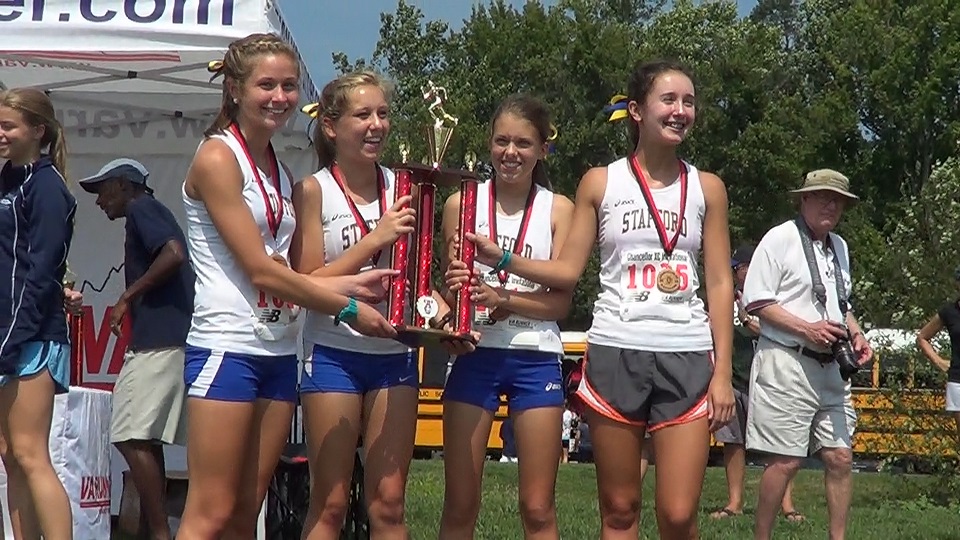 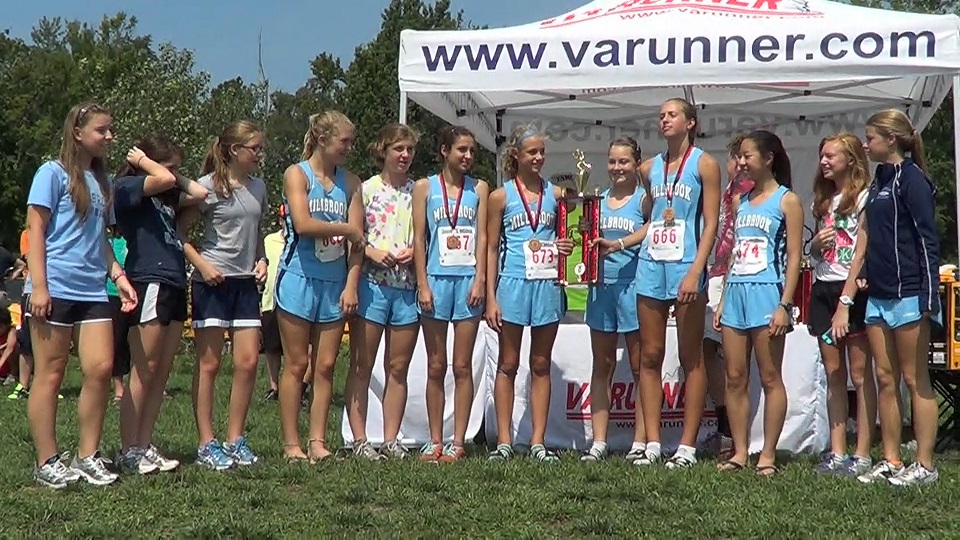 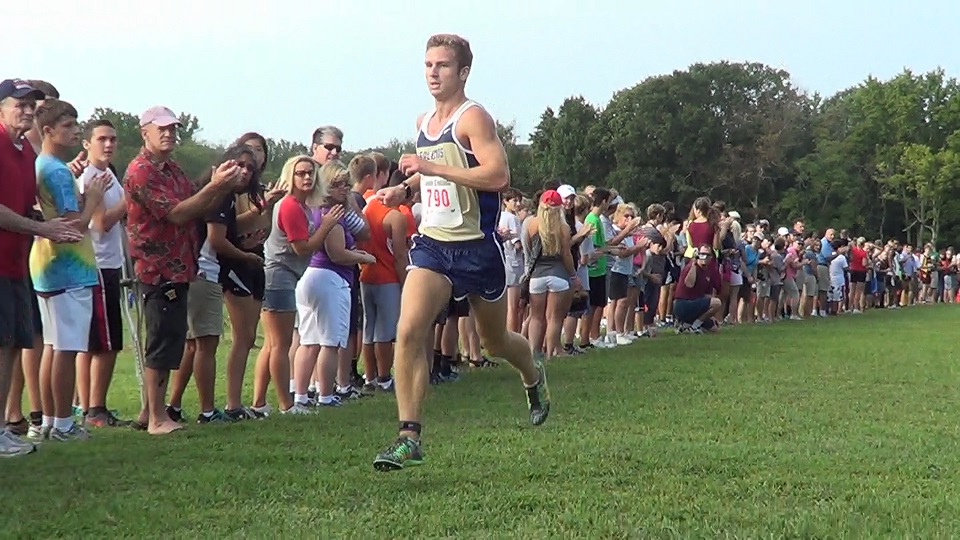 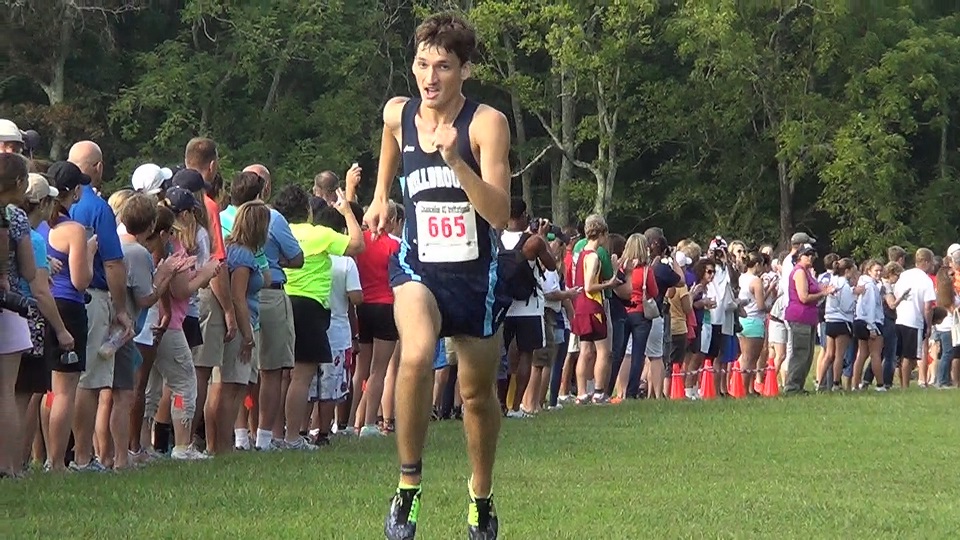 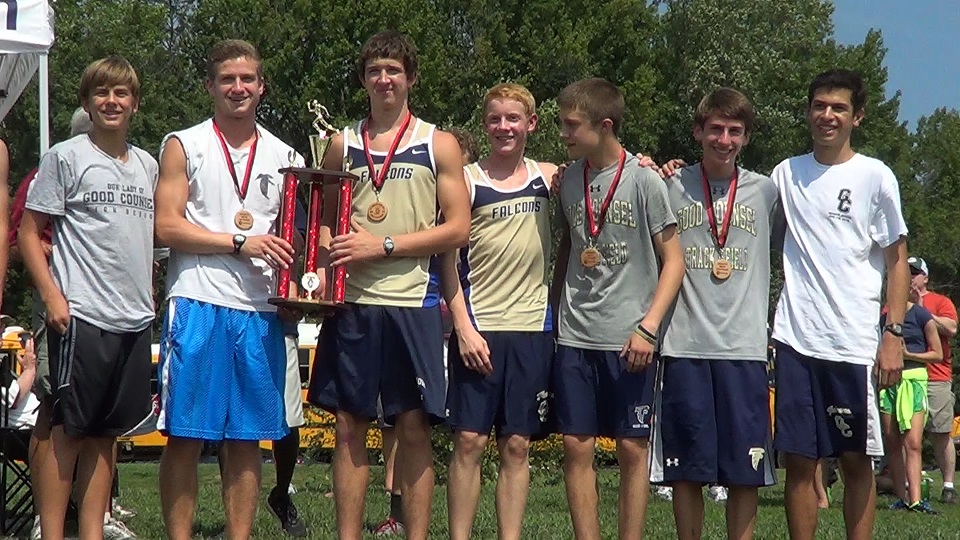 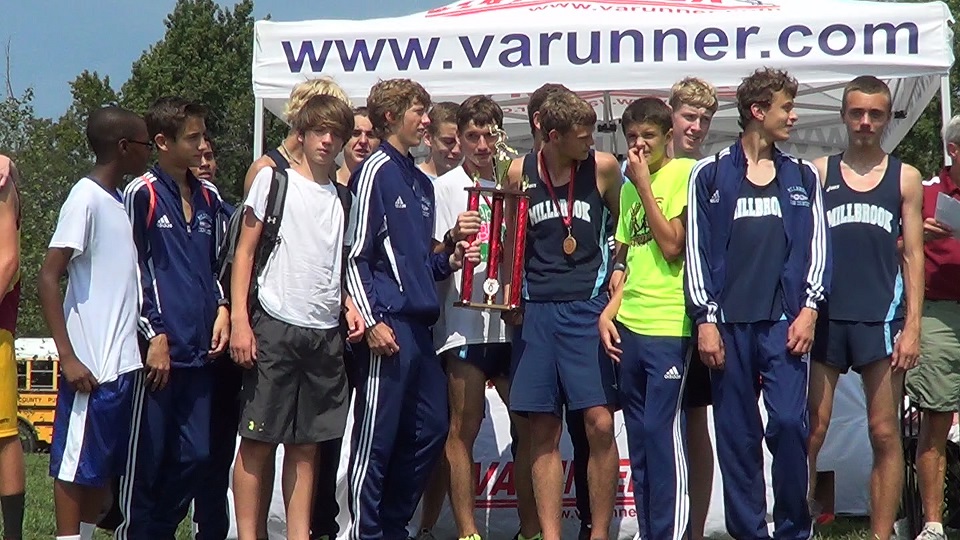 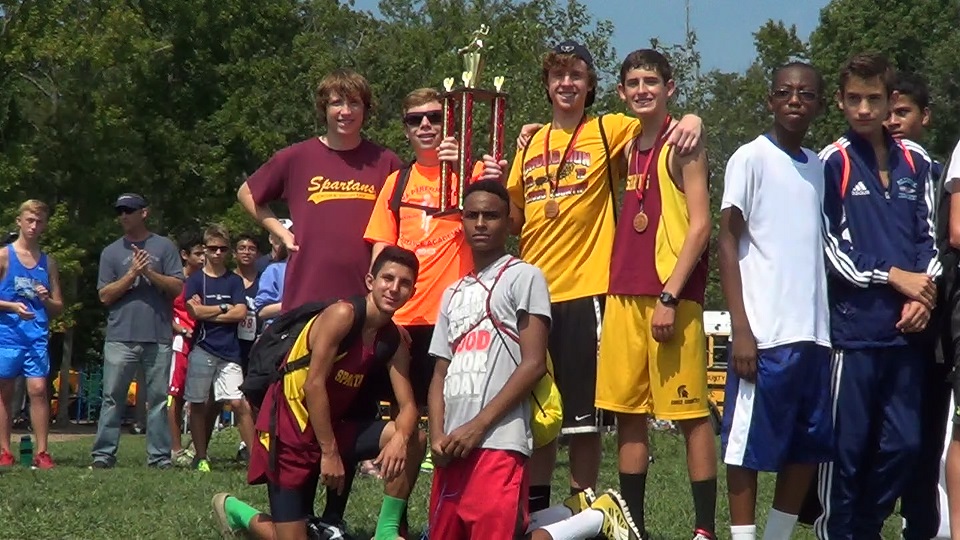 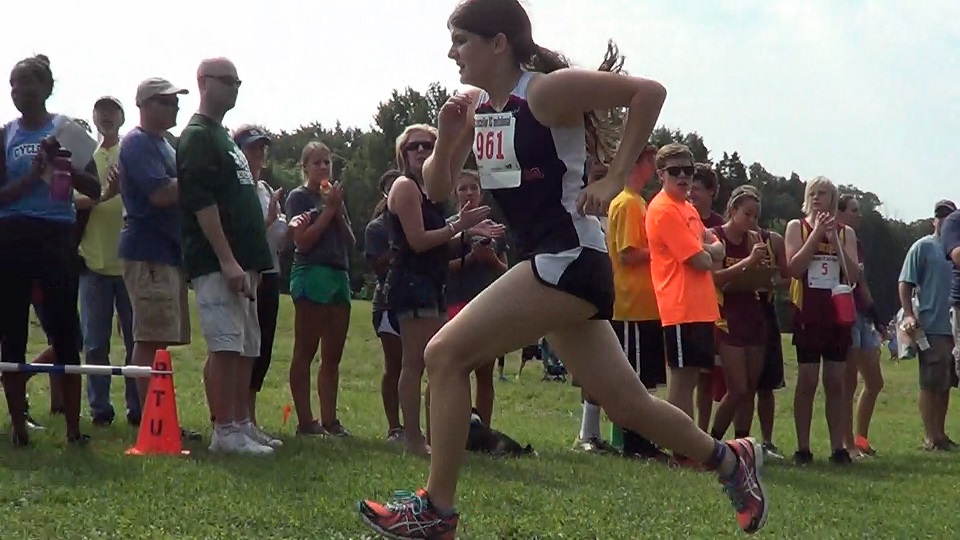 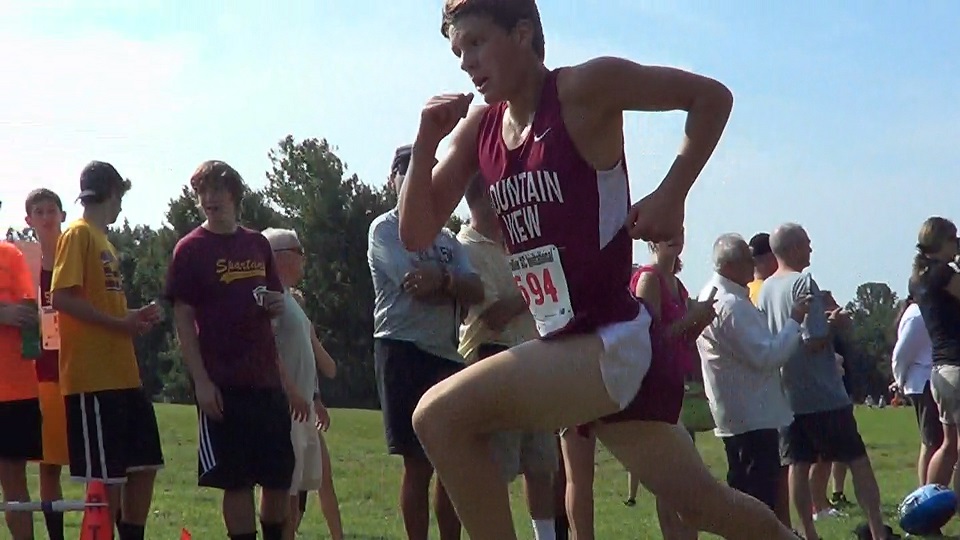 Meet Summary: Megan Rebholz led the VA #8 ranked Colonial Forge girls to the team title at the Chancellor Invitational in Fredericksburg on Saturday as while the Forge varsity runners including Rebholz trained through the meet racing in their training shoes were still able to hold off a surprising strong second place team finish from their former Commonwealth District competitors from Stafford High School (103 pts). Only four points separated Colonial Forge (99 pts) and Stafford with four runners in the top 25 for Forge between Rebholz (1st, 20:36), Kelsey Peace (13th, 21:28), Allison Taylor (19th, 22:03), and Frances Morales (23rd, 22:09), while Stafford packed it in well after Peace with four runners between places 16th through 21st place.

Stafford stands an excellent chance this fall to qualify for their first state meet as a squad since 1997 in the 6A South Region alongside Colonial Forge and in the future with only one senior among their top four finishers at the Chancellor Invite in senior Ana Nosal (16th, 21:51), sophomore Bridget Abbatiello (17th, 21:57), junior Jillian Weisbeck (20th, 22:05), and freshmen Alexa Putka (21st, 22:06).  If their pack continues to move up into the 20 minute 5K range and faster this season, the Stafford girls could potentially lock down that #3 spot in the 6A South Region behind Ocean Lakes and Colonial Forge this fall. The Colonial Forge girls certainly would have liked to have won more decisively over Stafford, but the 52 second gap between Rebholz and their #2 should tighten up this fall especially as Morales works herself back into shape after missing virtually all of her junior year due to injury.

Colonial Forge senior Rebholz was able to break away from a lead pack midway through the race including James Wood freshmen Sophia Dorsey (3rd, 20:58) and Good Counsel runner Cassidy Burke (2nd, 20:52) in the last half of the race for a 16 second margin of victory at 20:36 for the VA #10 pre-season ranked Rebholz. James Wood's Dorsey made a big splash and impression in her first high school race and is new name to remember in the new 4A classification.

The Millbrook program enjoyed a stellar season opener with both boys and girls squads earning top 3 trophy finishes with their boys as runners-up and girls taking third place. Meanwhile, Millbrook sophomore Tyler Cox-Philyaw was the top Virginian finisher in the varsity boys race behind Good Counsel's Collin Crilly, who repeated as the Chancellor Invitational champion with a performance of 16:36 to lead his private school squad from Maryland to the team title.

After breaking 4:30 in the 1600 and running 1:57 in the 800 last spring as a freshmen, Cox-Philyaw (16:55 runner-up time at Chancellor Invite) is an individual to watch out for in the new 4A classification and his team on both sides appears to field competitive top 7 lineups to be very competitive at the regional and state level in their new classification. The Millbrook girls had three finishers among the top 15 individuals with a trio of sophomores in Nadia Dahimene (9th, 21:18), Rylee Learn (10th, 21:18), and Hannah Croyle (15th, 21:40).

The Broad Run boys ran extremely well at the start of last cross country season at the Great Meadow Invitational with a top 3 finish to defeat several higher ranked squads and repeated the same feat at the Chancellor Invite with their team score of 130 points earning them a third place trophy. The Broad Run boys were paced by junior Ethan Newland cracking into the top 10 individually with a time of 17:22, while senior teammate Dane Boegner joined him for the individual awards ceremony in 16th place at 17:43. Broad Run might fare well in the new classification system competing in the 5A North Region against smaller Group AAA squads  and larger Group AA squads from last year's old system and find a way to crack into the top 6 for the state meet at Great Meadow.

James Wood had a top 3 individual finisher in both varsity races with the freshmen Dorsey in the girls' race and senior Luke Farinholt kicking ahead of Chancellor's Neil Schubel (4th, 17:06) for third place and near sub 17 minute performance at Loriella Park in 17:03. Farinholt has only run cross country in high school, but the lack of a track season to develop has not seemed to hold him back in coming off his summer training in great shape after the James Wood senior just missed a state meet individual appearance last fall when he placed 17th in the Region II Championship meet.

Race Videos (videos will be uploaded & live by 5 PM):

Photo Galleries (to be uploaded by end of weekend):