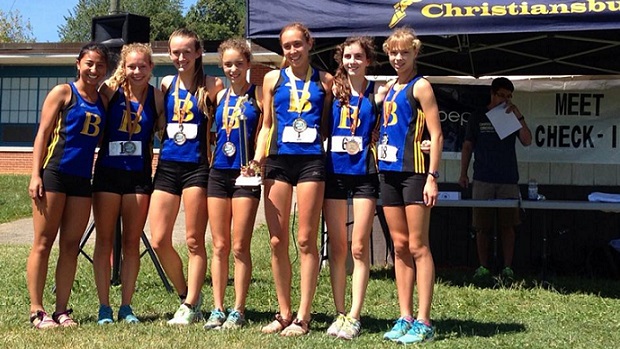 The Blacksburg boys and girls dominated in their season opener at the Blue Demon Invitational in Christiansburg with a sweep of the team titles and individual titles. Blacksburg junior Noah Combs was 31 seconds ahead of teammate and 1:52 half miler Kenneth Hagen (2nd, 16:53) for first place in the varsity boys race with a 16:22 performance, while Bonnie Angermeier was able to pull away from a strong field featuring both Cave Spring's Katie Fortner (4th, 19:33) and Jefferson Forest's Erin Saunders (2nd, 18:58) to assert herself as the current Group 3A state title favorite with a 18:53 course record breaking run.

The Jefferson Forest girls were outmatched by Blacksburg, but actually had their best team race of the season getting their entire top 5 under 21 minutes with individual runner-up Saunders (18:58), Shupe (20:07), Madelynn Knight (10th, 20:23), Abby May (11th, 20:33), and Carsen Wilkerson (12th, 20:59). Jefferson Forest will not have to worry about the 3A squad Blacksburg at the state meet and still look to be the team to beat in their classification as potentially their top competition in 4A in Midlothian did not look as strong as past Midlo teams in their season opener this past weekend at Great Meadow.

The Blacksburg boys were just two points shy of matching the low score of 22 points tallied by the Blacksburg girls, but won the boys' team title by a significantly larger margin with 78 points separating them at 24 points from the runners-up Patrick County (102 pts). Only Patrick County senior Alex Turner in 3rd place at 16:54 was able to break up the Blacksburg trio of Noah Combs (1st, 16:22), Kenneth Hagen (2nd, 16:53), and Michael Carter (4th, 16:56) from a top 3 sweep of the individual places.

After being very deep and loaded beyond their top 5 last fall en route to a NXN top 10 team finish in Portland, there was a decent time gap on Saturday for the remaining Blacksburg's top five scorers to come through the chute between junior Matthew Conner (6th, 17:24) and sophomore Sam Teller (11th, 17:40) that will certainly need to close up in bigger more competitive meets, but was no problem for them on Saturday. Jacob McCoy, the 2012 Group AA indoor state runner-up at 1000 meters, ran #6 for Blacksburg at the Blue Demon Invite with a 12th palce finish of 17:49 and will be counted on to run even closer to his team's front three down the road.