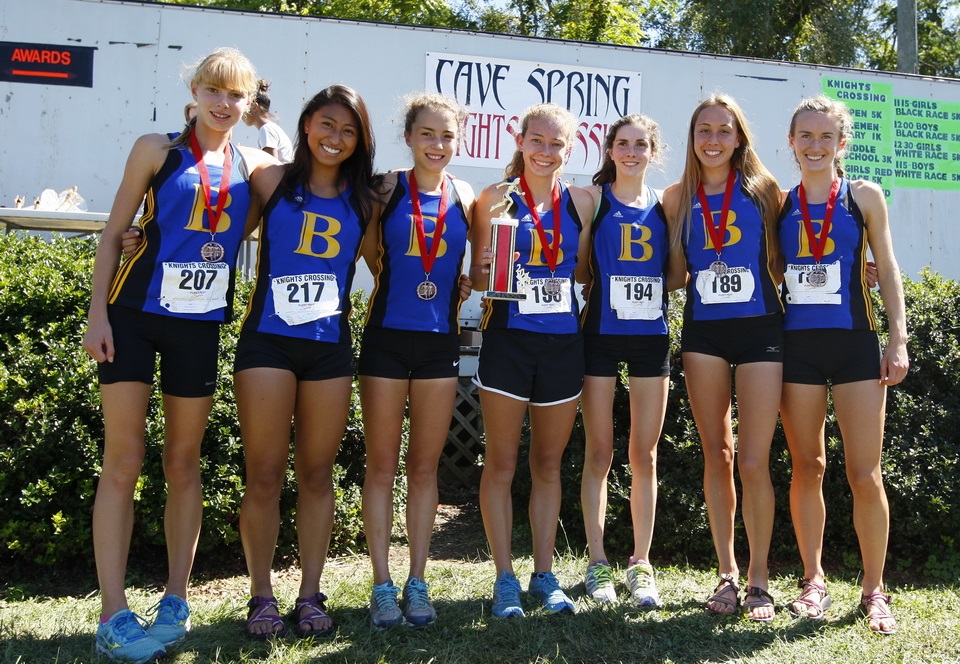 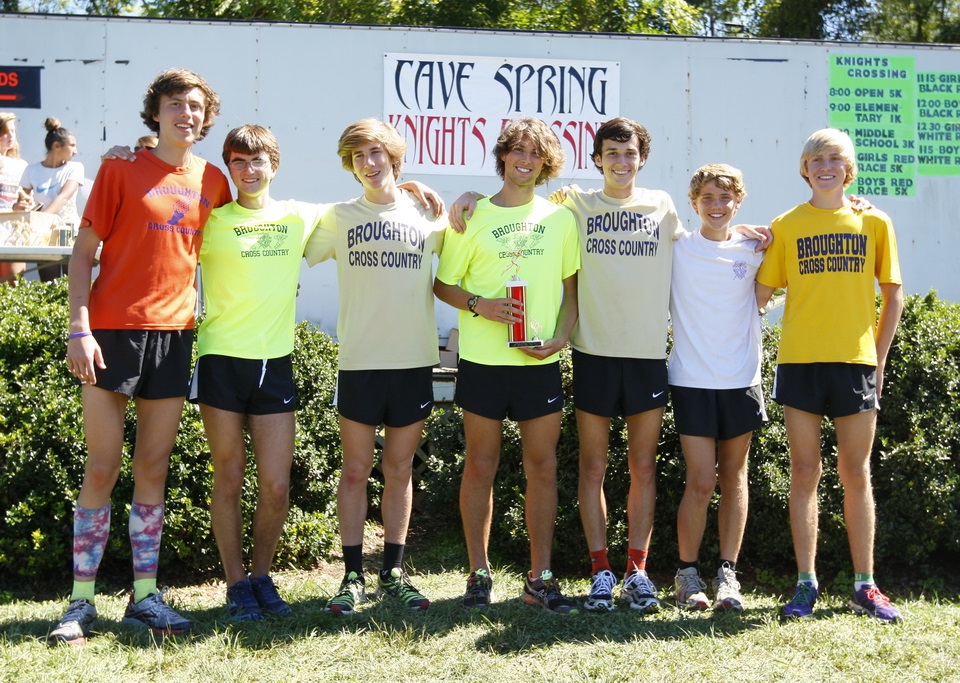 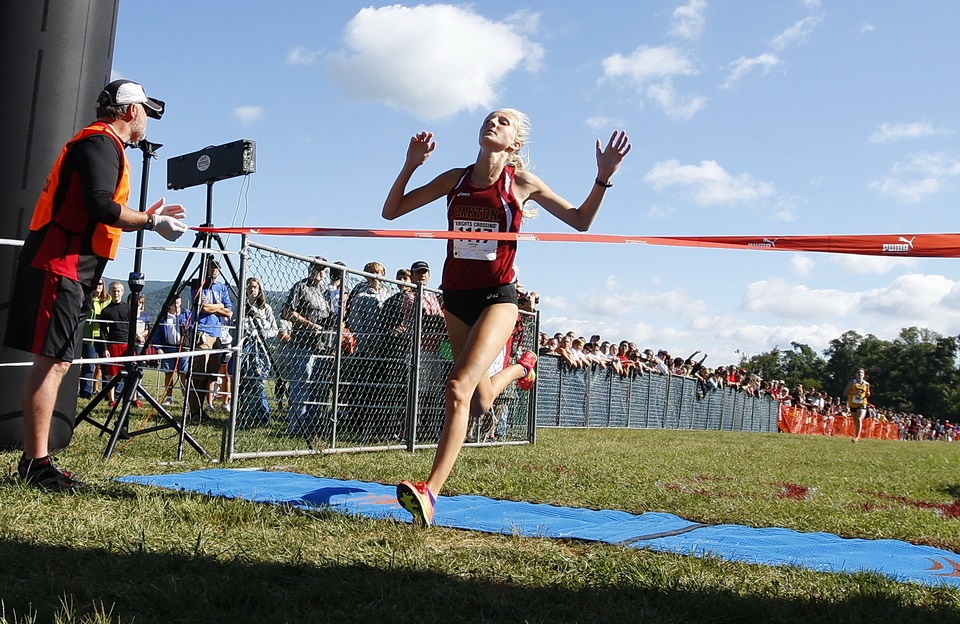 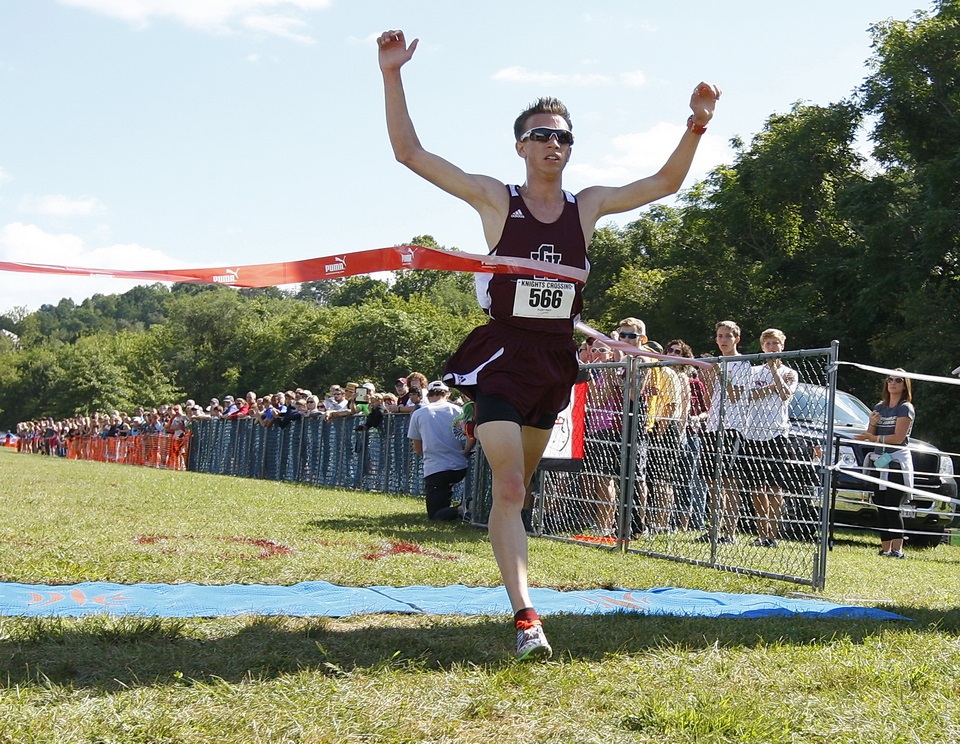 The 10th annual Knights Crossing Invitational was one of the best ever in meet history with a meet record going down and some of the deepest team and individual fields with national ranked caliber squads and teams and likely a good share of this season's state champions in-state and out-of-state among several Southeast Region states. Check out our meet coverage with more coming on the way!

Girls Meet Summary: The Blacksburg girls came in as the #1 ranked team in the state of Virginia to the Knights Crossing Invitational, which would pit them against the #2 ranked squad from Oakton as well as strong out-of-state competition from Tennessee in Morristown-West, North Carolina in Broughton, and Georgia in Collins Hill. After a high mileage and tough week of training leading into the meet, the Blacksburg girls showed themselves to have enough zip in their legs to dispatch of a stout field assembled at Green Hill Park in Salem on Saturday. Their squad was led by junior Bonnie Angermeier, who last week broke the course and meet record at the Blue Demon Invitational with a 18:53 victory. Instead of racing with the top individuals and race leaders, Angermeier instead ran in a tight pack with her teammates Jennifer Fleming, Claire Ewing-Nelson, and Emily Beatty for over the first two miles of the race. The pack moved up well throughout the meet to find themselves inside the top 10 together in the last mile with Angermeier as the top finisher in 5th place at 18:38. The pack strategy paid for Blacksburg with Angermeier helping pull and push her other teammates in particular junior Jennifer Fleming running her first 5K in two years by nearly 20 seconds 7th place at 18:49. The Lady Bruins had two more under 19 minutes at Green Hill Park in senior Claire Ewing-Nelson (8th, 18:51) and junior Emilly Beatty (9th, 18:54). Their next two finishers were their two gifted 9th graders in Samantha Marin (14th, 19:24) and Annie Kay Combs (16th, 19:27) to add up to a team score of 43 points and team average of 18:55 for their top 5.

There was no doubt that Blacksburg had the meet won after their first four came through under 19 minutes, but the official results had to come to see if either Oakton or Morristown-West grabbed second place. The two teams were evenly matched in the runner positions #2 through #4, but Oakton gained advantage in the #1 spot with the race champion Klimkiewicz and the always critical #5 runner to finish with a team score of 71 points. Morristown-West girls annually compete for state titles in Tennessee and this year's squad appears to be no exception with a solid team average of 19:27 at Knights Crossing to place 3rd with 80 points. Despite Blacksburg beating them soundly, Oakton girls ran very well with a top 5 nearly all under 20 minutes with Klimkiewicz (18:10), Hailey Dougherty (11th, 19:19), Kara Kendall (13th,  19:23), Maryn McCarty (22nd, 19:54), and Casey Kendall (24th, 20:01). The younger Kendall in the freshmen Casey is a strong boost to the Oakton lineup this fall as they figure to be in the mix for the Group 6A state title.

Another team taking pack running seriously at the Knights Crossing Invite was the Hidden Valley girls who impressed racing in trainers with their top 6 finishing among a 20 second spread from 20:26 to 20:46 with Carla Weidner (36th, 20:21), Helena Harding (39th, 20:26), Hailey Singleton (43rd,  20:34), Ali Sharpe (44th, 20:44), Leslie Weidner (46th, 20:42), and Heather Mwitanti (49th, 20:46). Do not be surprised in championship season to see the Hidden Valley girls close the gap significantly on the top ranked Blacksburg squad than the 164 point difference which existed between the two squads with Hidden Valley in 6th place (207 pts) at Knights Crossing.

Competing in her final Knights Crossing after competing all 4 years of high school as well as in the middle and elementary school races was Cave Spring senior Katie Fortner who bounced back well from a subpar season opening 4th place finish at the Blue Demon Invite last week to run her fastest time ever at the meet with a 18:28 season best third place finish behind only Klimkiewicz and Mount Tabor's Kayla Montgomery (2nd, 18:14).

The 2012 Foot Locker finalist Klimkiewicz ran a very smart and controlled race to let others lead early on in her first time racing at Green Hill Park and did not make her move to go for the win till late in the last half mile to overtake Mount Tabor senior Montgomery, who several weeks ago ran a time of 18:04 at the same course for the Foot Locker South Regional at McAlpine Greenway Park in the Providence Invite. The winning time of Klimkiewicz at 18:10 ranks 5th fastest all-time in meet history behind only the four best distance runners from the Roanoke Valley area in the past decade in Glenvar's Megan Marsico (18:01 - 2008), Blacksburg's Kathleen Stevens (18:02 - 2009) and Joanna Stevens (18:04 - 2009), and Northside's Catherine White (18:09 - 2007). Two Foot Locker finalists on that list (White and Marsico) including All-American in White, while the Stevens twins were high up on the all-time state lists in several events and Kathleen Stevens was a Nike Cross Nationals runner-up. Klimkiewicz has goals of not only making it back to San Diego for Foot Locker Nationals, but finishing in the top half of the field and challenging for an All-American spot.

Boys Meet Summary:  The state of Virginia did not even play second fiddle, but rather third fiddle to the great out-of-state competition which was showcased at this year's Knights Crossing Invite with the top two finishers individually as was the top two teams coming from beyond the borders of the state of Virginia.

The state of West Virginia has seen a resurgence in distance running within its state in recent years with teams and individuals running well at the regional and state level, which George Washington (WV) senior Matthew Brafford is helping to continue that positive trend. Brafford was able to run away from the field early on and create separation with a 4:45 first mile and go through the 2 mile well under 10 minutes to go onto destroy the meet record by 16 seconds with a 15:21 victory. One of his season goals is to break the West Virginia state meet course record by Jacob Burcham, who flirted with a mile time approaching 4 minutes after his junior year.

The second place individual finisher in the boys' race was William Roberson of Broughton in a time of 15:39. Not to be confused with Willie Roberson from the TV show Duck Dynasty. Roberson and his Broughton did put on an entertaining show though for the local Virginia schools and spectators with arguably one of the best teams in the entire Southeast returning this fall with four sub 16 minute runners. The Broughton boys steamrolled through the flat Green Hill Park 5K course with 6 runners among the top 13 places and quick times across the board from Roberson (2nd, 15:39), Asher Smith-Rose (4th, 15:48), Jeremy Brown (7th, 15:56), John Dalton Rohr (9th, 16:03), Peter Millsaps (12th, 16:09), and Will Sandin (13th, 16:14).

Their dual meet like low score of 34 points put them well ahead of state champion caliber squads in Tennessee's McCallie School (2nd, 79 pts) and Virginia's own Blacksburg (3rd, 97 pts). Broughton's team average of 15:55 was 51 seconds faster than the 2012 Blacksburg squad at Knights Crossing, which ended up being the highest ever team finisher (10th) by a Southeast region school at the Nike Cross Nationals. If Broughton can qualify for NXN, they certainly appear to have the potential to best the 2012 Blacksburg performance like they already did at Knights Crossing.

Other top Virginians able to break into a top 15 clogged with runners from Broughton included Brad Swiney (10th, 16:05) of John S. Battle and Alex Turner (15th, 16:20) of Patrick County. 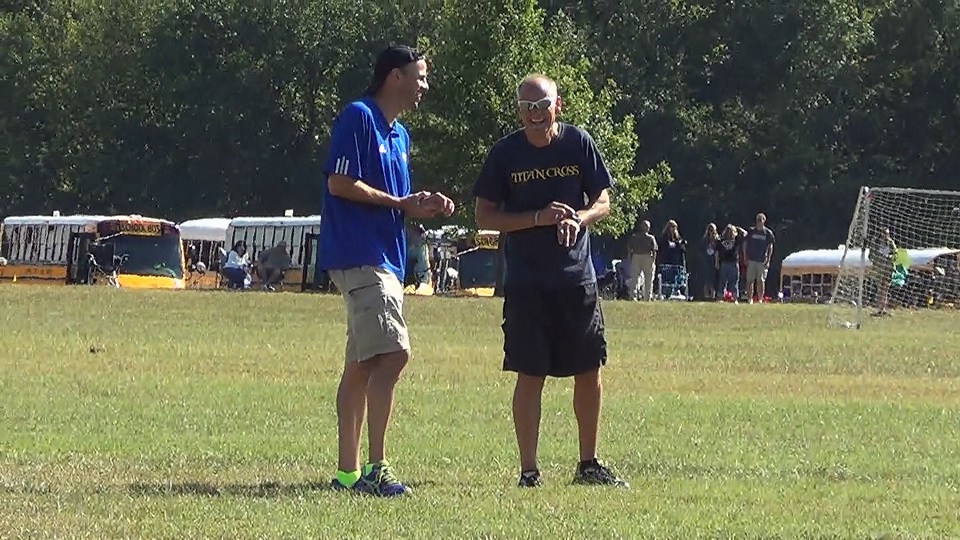 These two guys know what they are talking about when it comes to coaching high school cross country teams.  Despite having one of the fiercest rivalries in the state between their two girls teams over the past 6 years, MileStat.com caught Coach James DeMarco of Blacksburg and Coach Daniel King of Hidden Valley sharing laughs together prior to the start of a race at the Knight's Crossing Invitational this past weekend in Salem.