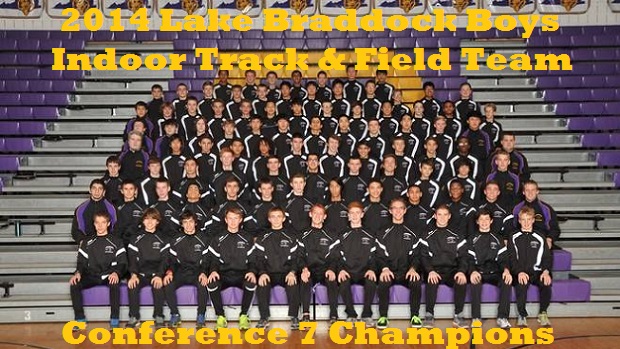 The Lake Braddock Boys and South County Girls were crowned the inaugural winners of the Conference 7 Championship at Episcopal High School in Alexandria on Saturday.

The Lake Braddock boys won their first district/conference title in the last six years by scoring in every event except one, the long jump.  After waiting a day due to postponement due to snow, the Bruins started out quickly on the Friday evening portion of the meet.  The LB distance crew racked up 59 points in the distance events to lead the way. 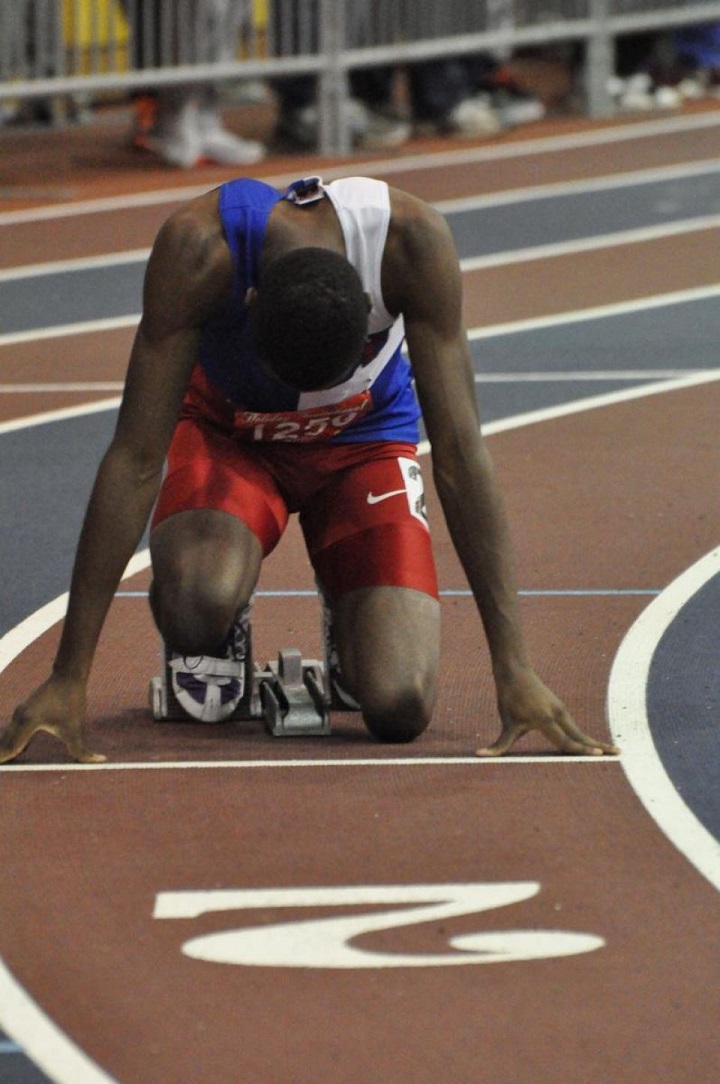 Boys High Jump – An under the weather John Seals (Sr) fought off a tough battle from TC’s Noah Lyles by winning on a jump off 4th attempt at 6’6. Lozie Goolsby of West Potomac cleared 6’4 inches for third in a strong event for the conference.

Boys Triple Jump- Kevin Hires (Sr) from South County dominated the event with a new conference record of 46’2. (Conference records are being carried over from the Patriot District as the conference is the same except for the departure of Lee). Annandale teammates finished 2nd and 3rd for the Atoms in an event that had 5 of six scorers from the class of 2014.

Boys Shot- Cameron Woods (Sr) from West Springfield continued a strong indoor campaign with a toss of 49’5 to win the event and lead two other teammates on to regionals. Lake Braddock teammates Omar Ahmad and Justin Neuman had huge personal bests to finish 2nd and 6th and provide Lake Braddock with a huge start.

Boys 4x800 Relay-Lake Braddock battled West Springfield throughout. After teammates were able to keep him with 20 meters of the lead, Ben Fogg was able to take the lead on the anchor leg and hang on for the victory. West Springfield was able to hold off a hard charging WT Woodson crew for 2nd with both teams advancing to regionals.

Boys Pole Vault- LB’s Andrew String continued his marked improvement this season with a state qualifying jump of 12’9 to win his first conference title. LB piled up points with a 1,2,3,6 finish in the event.

Boys 55 Hurdles-WS’s John Seals sped 7.68 to win the event. No other athlete was closed to breaking the 8 second barrier. 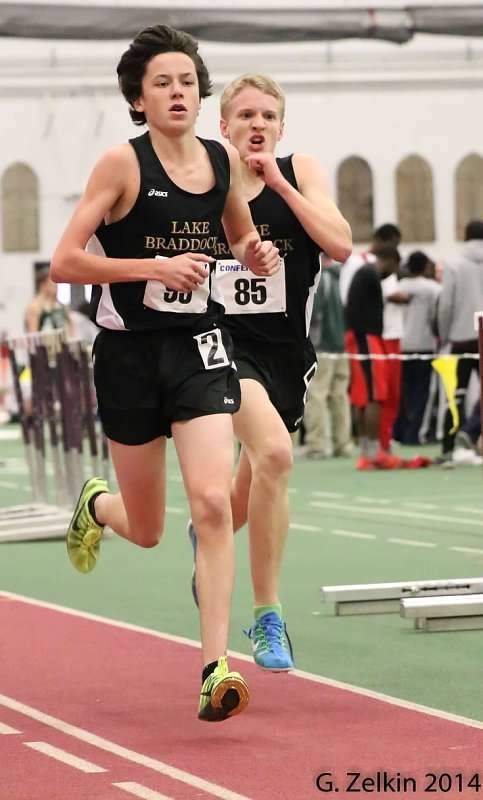 Boys 55 Dash- Super Soph Noah Lyles (TCW) was able to overcome a great start by Annandale junior Bernard Andoh to win by a hundredth in 6.55 seconds.

Boys 4x200 Relay- South County was able to score the victory from the slow heat. In the 2nd section, a fall in the first turn went undetected until the athletes had run over 100 meters. The teams were then recalled and restarted with several teams struggling to regain their form.

Boys 1600-This became a tactical race with many of the top seeds having to run one if not two more races later in the meet. Alec Jones of South County led early, but the entire pack was together with 4 laps to go. On the last lap, Owen Buck (WS) was able to showcase his outstanding closing speed to win over LB juniors Alex Corbett and Kevin Monogue. All three were within 7 tenths of a second.

Boys 500-Edgar Periera came in as the top seed and held on for the victory. Less than a second separated 1st from 5th in this event.

Boys 1000- With several athletes doubling back from the 1600, this event figured to be a tactical race from the start. Early leader Nahom Teshome (WS) set the pace until just after 600 meters was reached. Ben Fogg(LB) made an aggressive move to take the lead and held on for the win with Teshome in second. Coming off the last turn there were 7 athletes in contention. The biggest move may have come from Bryan Bergan (LB) who went from 7th to 3rd in the last 50 meters.

Boys 300-The Lyles brothers from TC showed their skills with a 1,3 finish in the event. Edgar Periera (LB) kept them from a family sweep. TC showed good depth with Mahlique Booth also contributing a 5th place finish.

Boys 3200-Lake Braddock senior Forrest Isenhour bided his time as he and teammate Kevin Monogue led throughout the 2nd mile and was able to just out-lean his teammate for the win (9:45.08-9:45.09).

Boys 4x400 Relay- The exciting finish to most meets, the 4x4 didn’t disappoint. TC Williams got to the lead early and continued to run from the front into the anchor legs. LB junior Edgar Periera was able to overcome a 25 meter deficit to carry the Bruins to victory.

The South County girls were able to power to victory (153.5 -145) over the LB Bruins with strong performances from their deep sprint/jump/hurdle crew. Seniors Kerisha Goode, Morgan Knight and EnNijah Majors showed their diverse skills each scoring in multiple events and each winning at least one event.

Girls Shot Put: TC Williams as usual has another crop of strong throwers. Alexus Foreman had a big throw for the win and had teammates in 2nd, 5th and 6th places. LB senior Maggie Ruud placed third as a part of her long two days. Ruud scored in pole vault and 300 dash in addition to running on two winning relays.

Girls 4x800 Relay: West Springfield led throughout and showed why they are the likely team to beat in the event at the 6A state meet. LB and SC finished 2nd  and 3rd to claim the other two qualifying spots.

Girls Long Jump: South County continued to dominate the horizontal jumps with a 1-2 finish from Goode and Majors. 3” separated 6th from third.

Girls Pole Vault: In an event where the top 6 seeds all had state autoqualifying marks coming in, it was LB senior Rachel Fasana with a 11’1”clearance for the win.

Girls 55 Hurdles: Morgan Knight (SC) dominated the field in a conference record 8.35 seconds. With 2 other teammates in the top 4, SC started to give themselves so breathing room in the team scoring.

Girls 55 Dash: Kerisha Goode (SC) held off Skyla Davidson (LB) for the victory. SC was dominant again in a sprint race with a 1,3,4,6 finish. 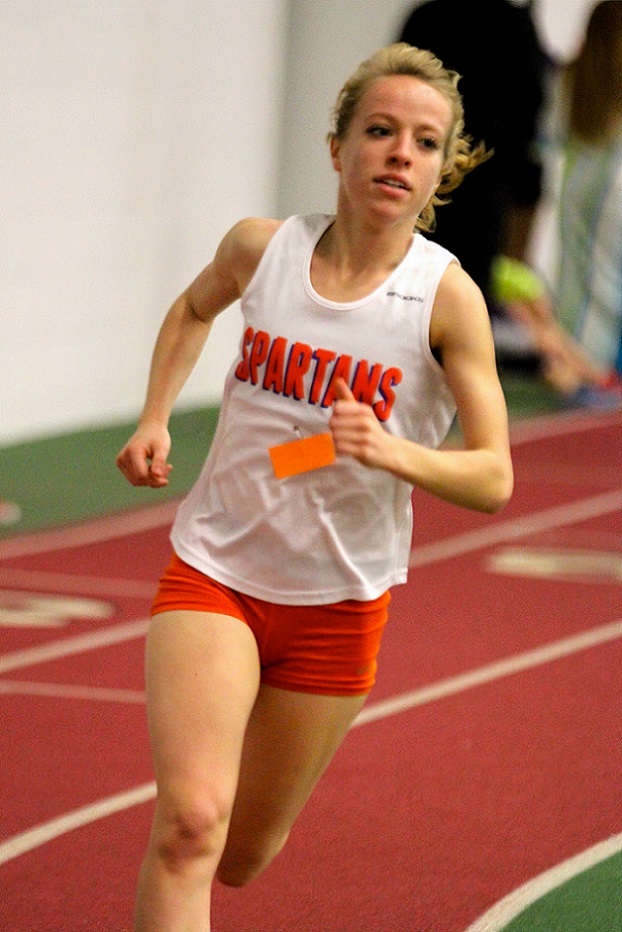 Girls 4x200: The Lake Braddock girls got off to a good start and were able to run away from the field in this event. A bobbled exchange from South County kept the #1 seed from challenging for the win, having to settle for 3rd. WT Woodson finished 2nd.

Girls 1600: Caroline Alcorta took this one from the gun in a state leading 4:52.08. The rest of the field stayed packed together until 600 meters to go. Hannah Christen and Katy Kunc  moved hard over the last 2 laps to finish 2-3.

Girls 500: EnNijah Majors was dominant in this event and was the only one under 1:20. South County picked up 3 spots as they continued to dominate the sprints.

Girls 1000: After staying back in the 1600, it was Lake Braddock senior Hannah Christen’s turn to race to a big win in 3:00.54. Teammate Katie Roche continues to improve post injury with a strong 2nd place finish. Of note, Reagan Bustamante of West Springfield was able to finish 3rd overall from the slower section. Bustamante had to run alone from the gun finishing 11 seconds ahead of her closest competitor.

Girls 300: EnNijah Majors and Morgan Knight 1-2 finish along with teammates in 4,5,6th places earned South County the team title. Only Maggie Ruud (LB) was able to break up the Stallions with her 3rd place finish.

Girls 3200: A repeat of the 1600 with Caroline Alcorta dominating and lapping all but one on her competitors. Katy Kunc finished 2nd for Lake Braddock and Katie Genaurio 3rd for West Potomac.

Girls 4x400 Relay: South County led on the first three legs, but senior Katie Roche (LB) was able to bring her team back from 30 meters down for the victory. South County held on for 2nd with TC earning the 3rd spot for regionals.