Just released today was the VHSL membership agenda for the March 13th meeting. In this agenda reads "Discussion of eliminating pole vault for 2014-15 indoor and outdoor track" 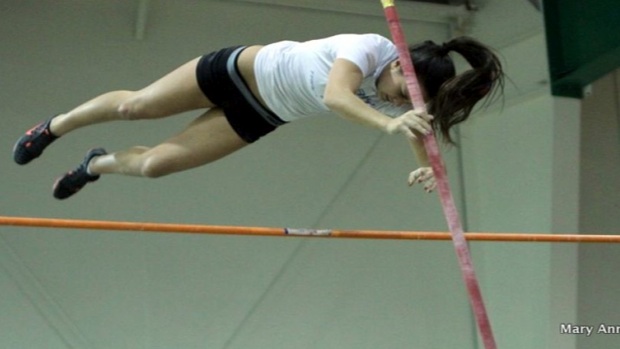 Jaqueline Meeks of First Colonial, one of many athletes whose only event is the Pole Vault (Photo by Mary Ann Magnant)

RICHMOND, Va. - MileStat.com was on site at today's VHSL meeting held in Richmond. Among the items being discussed was the elimination of pole vaulting. This item was discussed amongst all classifications, each classification meets in a separate board room. The reasoning behind this being brought up was certain 2A East schools felt it was unfair for themselves to be competing against schools who had pole vault and thus scored points in the event, moreso then any other school. MileStat.com was only in the 2A classification discussion as this is the most pertinent area to cover with regards to this discussion, once more information about the other classifications is disseminated it will be updated here.

2A Classification Discussion: The VHSL (not a school athletic director... i.e. voting member) did start the discussion by saying the VHSL has received legal advice in the past that when changes are made that they be made equitably state-wide. His demeanor also was that legislation like this, deviating from NFHS and VHSL guidelines for what is part of a sport is difficult to pass. Some of the suggestions brought up on the floor by schools' administrators were: separating it from the sport entirely, having pole vault not count towards a team title, safety concerns, lack of interest, and new liability costs for schools having to get new liability insurance.

In response to the first suggestion a committee member, someone who will be voting on this matter if it gets motioned for a vote, said: "awesome idea to create new pole vault competition separate from track."

Another interesting quote was: "having pole vault makes the competition sub-par because there is no competition."

The floor then discussed specifically Maggie Walker and their points from both the regional and state meets. The general opinion on the floor was that it was unfair that Maggie Walker had pole vaulters and that their teams did not. Many cited false statistics and facts saying Maggie Walker was the only school in it amongst other things ignoring one speaker's remarks that MW actually scored more points in the girls 3200 then pole vault.

After this discussion the motion was suggested and seconded. A vote was called and the motion passed 31-2 in favor of making pole vault its own competition outside of the sport of track and field. Some suggested even moving it to a different location then the state meet.

Other pertinent legislation was to make 1A/2A a single day meet, few individuals who voted on this could name more then a single event and thought the only reason and only event held on Day 1 of competition is the 4x800.

1A: Recommended that because of the small number of participants at the 1A level, athletes who wanted to pole vault could do so by competing at the next level up (2A) and that their points would not go towards a team's total. 1A moved this motion along so that it will reach the committee level. Concensus was uncertain of how this would allign with NFHS and VHSL rules.

4A: Sources are saying this classification voted that pole vault should not change.

5A: Multiple sources confirm that 5A voted unanimously in favor of keeping pole vault the way it is.

6A: Voted unanimously in favor of keeping pole vault as is.

What this all means is that the discussion will be brought to the executive committee. If this is ruled as emergency legislation, which all sources tend to suggest it is not, this could come up for a vote and be passed by winter. Likely this will be discussed at the fall meeting and then could go to a vote that would not go into affect, if it passed, until 2015-16.

Twitter Feed: Using #MileStatPV (please keep tweets appropriate or they will be banned)

Poll: (not the main issue with pole vaulting and not thought to be the reason for this discussion)