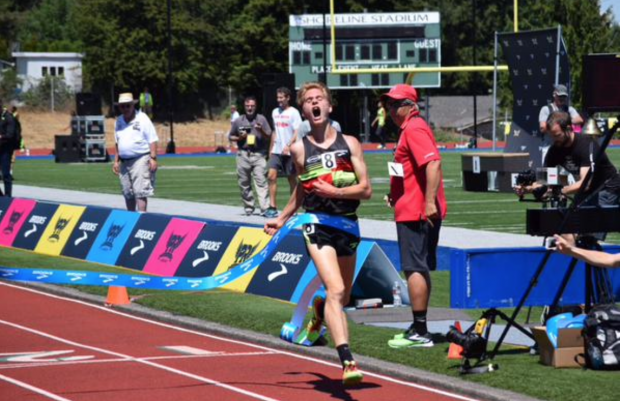 You can now safely say that Drew Hunter is the greatest 2 Miler our state has ever seen. This Saturday out in Seattle he toed the line against the nation's best in the 2015 Brooks PR Invitational and reigned supreme. Reversing the finish of the adidas Dream Mile, Drew out kicked superstar Grant Fisher to not only win but also set a new state record in the 3200.

Though they ran the full two mile distance, his 8:42.51 converts to a 8:39.48 which breaks Sean McGorty's 2013 8:42.56c that he set this same weekend but at New Balance Nationals en route to his lone national individual title.

Drew made the perfect decision it seems to run at the Brooks PR race instead of the very hot heat down in Greensboro this weekend. It was unfortunate that so many of the athletes has to chose which meet to go to but it seems safe to say that Drew Hunter can consider himself the national 2 Mile champion this year.

To win this title he beat numerous NXR Champions, FL Regional Champions, the two-time Dream Mile Champion who is also a two time defending FL National Champion and the reigning New Balance Outdoor 2 Mile Champion. That shows you the competition he was dealing with and how he can really say he is the king of the 2 Mile not only for Virginia but the entire nation.