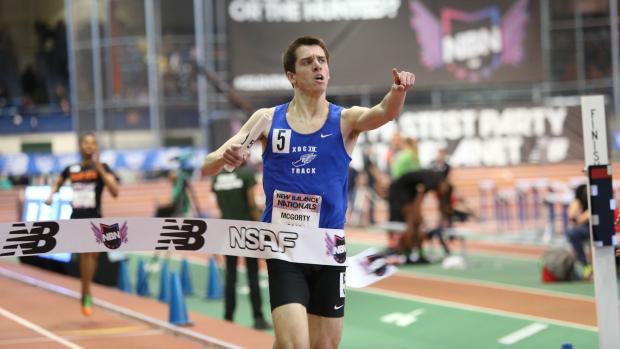 Going in you have to know something special was going to happen. All year Chantilly had performed great in nearly all the relays from 4x200 to 4x800 and had both Titus Jeffries and Brandon McGorty rise to be some of the top athletes in the entire nation. This team was made for the Sprint Medley.

The race went off great, Michael Scopellite led with his opening 200 leg to handoff to Justin Loy who ran the second 200. Combined these guys split 45.63.

Next it was Titus Jeffries turn to dominate his leg. Anyone who has seen him anchor a 4x400 knows exactly what we are talking about. He is a beast machine and seemingly gets stronger as the race goes on. He opened strong and moved around team after team to split a 48.86 with the clock at 1:34.49.

Onto the anchor it was junior Brandon McGorty to take Chantilly home. He quickly caught up and passed his competition and pushed the pace from the first step. He went on to split 1:49.53! That is just .32 off of the national record.

This performance was the greatest sprint medley indoors ever and just adds to the list of amazing performances that VA has had thus far at New Balance Nationals.

"This was one of our big goals and it was satisfying to see all four legs come together and run great at the same time. Our goals were to win first, second state record, and third national record. It was nice to run well all together at the same time." - Coach Gilchrist