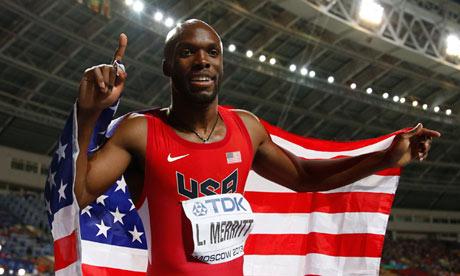 In the fastest 400m ever ran, Portsmouth's own LaShawn Merritt ran his way onto the podium with a bronze medal place in 43.85.

From his starting spot in lane five the Woodrow Wilson and East Carolina University alum had the perfect sight of the race that was before him. He opened strong and went through the 200m even with Wayde Van Niekerk (South Africa) who was out in lane eight. As they rounded the turn, the 2012 Olympic champion Kirani James (Grenada) pulled even with Merritt. It was clearly a three man race with 150m left.

Merritt, the 2008 Olympic champion, drove the best he could down the home stretch but everyone was in store for something no one expected. Simply put, history was made with Van Niekerk shattering the world record as he crossed the line in 43.03.

Kirani James out leaned Merritt to finish with the silver in 43.76 and Merritt finished in third with his 43.85 time.

Merritt's Olympics are far from over though. He will race in the 200m dash starting August 16th where he is ranked World #1 this year and in the 4x400m relay starting August 19th. Being that he is the fastest American on the relay team it is likely we will not see him until the finals in this event which is the final track event on August 20th.