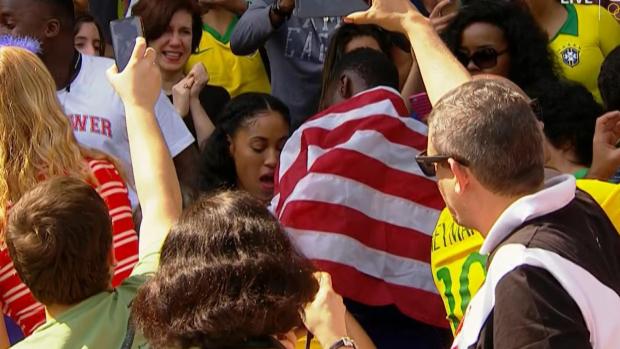 Her boyfriend, Will Claye (formerly of University of Florida) not only hop, skipped, and jumped his way to back-to-back silver medals in the triple jump but he also jumped into the stands and got down on a knee to propose to Queen.

"I'm going to go out there and do what I have to do on the track first and I am going to make her my fiancée after that." - Claye (AP News)

Queen entered the season with high hopes of making her second Olympic team. She finished just shy of that goal with her fourth place finish missing the team by .02 seconds. Though she was running the 100mH at these trials, she actually made the Olympic final in the 400mH back in 2008.

She finished fourth at the 2008 Olympic Games in Beijing with a 55.96 time. Two years later she dropped that time to 54.55 to win the NCAA D1 National Championship for Virginia Tech.
Queen may be known nowadays for her hurdling expertise but she is also a phenomenal triple jumper as well. She sits at #12 all-time in the state of Virginia with her 40-8.75 best as a senior.
That jump may have also been one of her greatest accomplishments and wins as a high schooler as it was in the legendary 2006 Southern Track Classic which featured the deepest triple jump competition in the state's history. A record four girls (Harrison, Nakeisha Wineglass, Angela Jenkins, and Rachel Butler) all jumped over 40' in a single competition.

So despite not being in Rio as a competitor, Queen is no doubt very happy of how the Olympics went for her and her now fiancé.

And for those that remember Queen falling in the 2005 Colonial District 300H, breaking her collar bone, getting up, and winning the race... you can agree that we have not seen the last of Queen on the track.