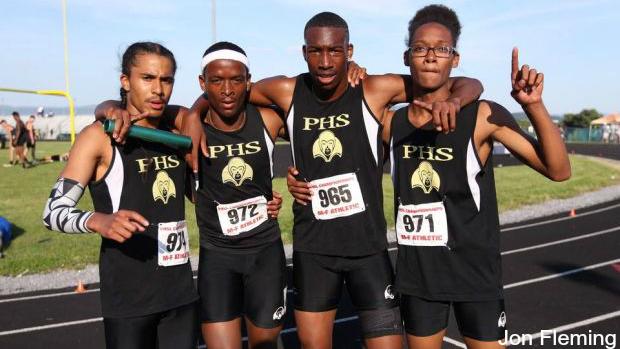 The Phoebus Phantoms really needed all the points they could get last week at the state meet. Whether it was in the field events or relays, they need those points. It ended up being so close that the meet came down to the 4x4 between them and Blacksburg for the state team title.

Coming in clutch was Andre this past weekend who scored an important 32 points for the Phantoms who scored 85 points to win by just two points over Blacksburg's 83. These points were important and they almost didn't happen.

A week prior at Lakeland HS in the 3A East Regional, Andre really flirted with a season ending injury. After clearing around 6-4 in the high jump Andre was all alone in the competition and that meant the bar was going up. Though this was nothing new, it was definitely different.

He began his approach for 6-6, turned, jumped, and flew thru the air. As he turned and bent his back he flew his legs up as hard as he could and instead of clearing the height he knocked himself in the nose. The blood gushing out was immediate. After the initial hysteria that he may have hit his head on the standard, he and the coaches on-site were able to figure out he had kneed and broken his nose.

They had to take him to a nearby hospital but his mom was even joking that he wanted to be back by the 4x400. Funnily enough though, he came back and ran in that 4x400. Mask and all for him on the anchor leg to bring home the Phantom victory.