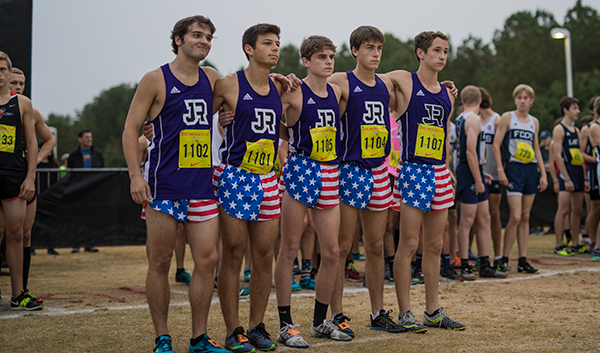 Not every team is realistically fighting for a state title, in fact few are, but many have great stories. James River (Midlothian) is definitely one of those teams with a great story in the form of a great season.

This 6A team just outside of Richmond may not be a well known school recently in the track/XC world but it certainly has had its' stars over the years. Since opening in 1994 the school has had three individual state champions in Ted Richardson, Kristen Wolfe, and Olympian Kellie Wells (Brinkley).

Despite that talent though James River has not had the best of luck recently as a team. Whether it was lack of numbers or unfortunate injuries James River has seen the highest highs and definitely some of the lowest lows since its' opening.

The lows being not having made it to states as a team on either side since 2005. The boys' last trip being in 2004, the only year both teams made the trip up to Great Meadow.

This year though the tides are turning around for the Rapids and its been years in the making. The two (entire underclassmen) varsity teams are led by junior Aaron Johnson and sophomore Charlie Walmsley and they are on a mission and that mission is making it to states.

The 2017 teams are not only young, they are also good. Especially on the girls side where a freshman and sophomore lead the way both under 20 (Lindsey Hester, the freshman, is pictured to the left). On the guys' side things are arguably the best they've been in a long time and that is definitely due to a serious group of guys buying into the process that Coaches Jeff Raskind and Chris Calfee have preached.

Over the next few weeks it will be an exciting and tough journey for these Rapids and many other teams in the state. They will toe the line one last time for the regular season this Saturday at the MileStat.com XC Invitational and then after that work to maintain and gain some speed heading into their regional meet.

At this regional meet, Region 6B, they will face tough competition from Cosby, Colonial Forge, Riverbend, and Clover Hill. No matter what though, you can bet these guys and girls are going to fight for every spot in an attempt to make it back to the state meet. Entering this weekend they are ranked 2nd and 3rd respectively in the region where only three teams advance.

James River's Boys Team was our performers of the week last week after their win on our poll for their team victory at the VTCA Invitational.