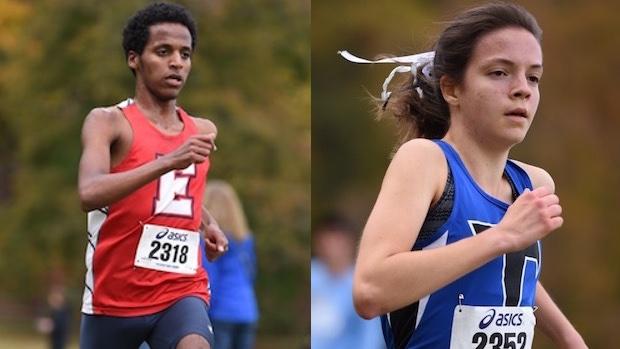 The VHSL Group 5A Region C Championships were held on Wednesday at the Oatlands Plantation in Leesburg, Virginia. Based on how both Thomas Edison's Yared Mekonnen and Tuscarora's Emma Wolcott tackled the difficult and hilly 5K course, both runners seem fit and ready to challenge for 5A state titles next Friday at Great Meadow.

Mekonnen laid back in the first mile behind more experienced and veteran races of the Oatlands course in the Tuscarora pair of Benjamin Nibbelink and Derek Johnson. Both with impressive PR credentials including sub 9:15 3200 meter times from the spring. Mekonnen, a recent commit to the University of Virginia, with a 9:20 3200 PR for himself, was able to surge past both Tuscarora runners by the time they reached the crest of the mammoth hill 2 and 1/4 miles into the race.

The Thomas Edison senior would finish in first place by 10 seconds with a time of 16:05, which was 47 seconds faster than his 19th place finish on the same course at the Oatlands Invitational in mid-September.  Mekonnen shared that he had been dealing with an injury over the summer and early stages of season, which is a major factor in his improvements since the start of the season.

Nibblelink (16:15) and Johnson (16:22) would finish second and third respectively to help lead the Tuscarora boys to the regional title with a tally of 42 points. Rock Ridge (2nd, 73 pts) and Freedom (3rd, 76 pts) will be joining the Tuscarora squad as state meet team qualifiers out of Region C.

The girls race saw Wolcott's teammate in Tuscarora junior Ava Hassebrock take the field out with a brisk first mile. Wolcott stayed a few seconds back with other pursuers in Freedom freshmen Abigail Church and Broad Run sophomore Ellie Desmond. The front group of four created a considerable gap of separation within the first 5 to 6 minutes of the race and it only grew in the final 2 miles from the rest of the field.

Wolcott owned the last half of the race in her final time competing on a familiar and local course to her at Oatlands. Earlier in the season, Wolcott had a signature win in one of the state's biggest and deepest invitationals at Oatlands with a time of 18:52.

Today at the 5A Region C meet, Wolcott was 34 seconds better clocking a swift winning time of 18:18. Only 7 girls have run faster on any version of the Oatlands Plantation 5K course including a 2015 version of Emma herself in winning her conference title in 17:59.

With 3-time 5A state cross country champion and returning Foot Locker finalist Heather Holt now racing up in the 6A classification with her George Marshall squad, the door is open for a new state champion in 5A next weekend. The Tuscarora senior Wolcott, who is still undecided on her college decision, may be the one to slam that door shut on the rest of the state title hopefuls next Friday at Great Meadow.

Rounding out the breakaway pack coming thru the finish line chute was Freedom freshmen Abigail Church grabbing runner-up honors in a time of 18:40, while Tuscarora's Hassebrock (3rd, 19:04) and Broad Run's Desmond (4th, 19:47) finished well ahead of the rest of the field. Church could be one of the fastest freshmen performers among all classifications at the state meet.

The Tuscarora girls made it a clean sweep of the team titles for the program and did so in convincing fashion posting a dual meet like score of 26 points in a regional competition. Behind their formidable front two in Wolcott and Hassebrock, Tuscarora inserted three more runners among the top 12 places. Their squad will head into the state meet as the 5A favorites after winning titles in 2014 and 2015, while finishing as runners-up in 2016.

Cracking into into the top 3 to advance onto the state meet with the Tuscarora girls were Potomac Falls in second place (74 pts) and Freedom in third place (77 pts), while Briar Woods (4th, 80 pts) was painfully 3 points away from a state meet berth. Freedom's team pack running was impressive to note as they were very disciplined in the first mile to not get caught up in going too fast, while making up a lot of ground in the last half of the race.