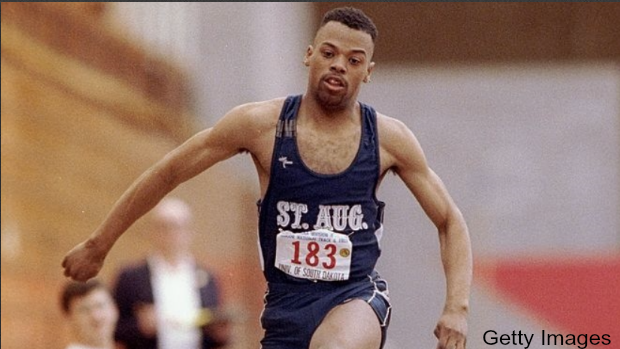 It's been 10,847 days since Keith Holley (Bayside) hop, skipped, and jumped his way into the record books. On that day, back in March of 1988 he leaped to a mark of 52-7.5 in the triple jump at Yale's Coxe Cage Indoor Track.

With kids getting faster and stronger these days the records are being rewritten month after month. His record though has withstood the test of time and weathered some very strong years in the jumps. In fact, it has stood so long that this year it now is the oldest record on the books.*

His mark is also the senior national class record. The other class records being 46-9, 50-2.5, and 51-8.25. Despite those impressive marks, no one has yet been again to make that step up to reach Holley's level.

When he jumped that mark it broke the previous national record set by Ken McClendon in 1974, his jump being 51-9.75.

Holley's jump also broke the previous state record which was set just one year prior. That record was 51-7 set by Kempsville's Larry Moore. Before Larry, it was Roger Bennett's (Gar Field) record with a distance of 51-4.75. Bennett's record was first set in 1983 and was the first of eventually five Virginia athletes to ever break 51 feet in the triple jump.

In Virginia though his record is the fourth oldest record on the books. Holley went on to compete in college for St. Augustine's and then compete in the 1992 Olympic Trials.

* This goes for events actually contested today and over the past two decades regularly.