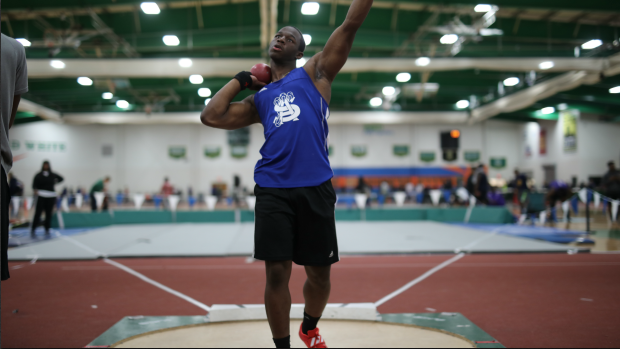 Atlantic Shores' Troy Yearwood is looking to put his way into history this weekend at the VISAA State Championships. Representing a very small school that only recently joined VISAA, he will be attempting to become their first indoor state champion. Outdoors, he already holds that honor as of his victory last year.

Troy is entered in the shot put competition where he holds a strong lead over the competition with his season best 57-7 mark. That ranks him VA #3 overall and leads the VISAA competition by 11'1".

Though he is almost guaranteed the title, he must translate that seed into an actual performance. If he is to throw well he is also in range of some very impressive records. The first of which is the VISAA State Meet Record of 57-0 set back in 2014 by Broadwater's Preston Richardson. The second record is Isaiah Simmon's (Woodbridge) 2011 65-0.5 facility record.

Be sure to make your way over to the throwing circle to watch Troy put his way into history and potentially the record books.