The duo of Zoe Rice and Natalie Barnes put on a clinic for the 5A jumpers this past week at states. Despite being seeded well below first in both jumps and in their first indoor state championships ever, this duo from Stone Bridge was able to successfully sweep the horizontal jumps at Boo.

Zoe started things off with her win in the triple jump Friday. She was seeded in the first flight and from the first jump was clearly ready to compete. She went 35-4.75 and then 36-5.5 in her first two jumps to secure herself a spot in the finals.

In the finals she competed well but was unable to improve. She entered her final jump ranked third and on that last jump she was able to blast out a 37-2 performance to take over the lead. The next two jumpers certainly gave it their best effort with both jumping their best attempt of the meet last. Zoe though had jumped just far enough to take home the state title by an inch. 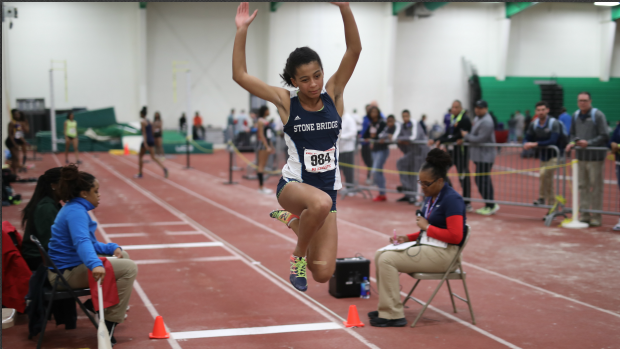 On Saturday it was her teammate, Natalie Barnes' turn. In the long jump competition she was fired up from the start. She fouled her first attempt but then posted an impressive 18-5.75 to take over the lead. It wasn't until Kori Carter jumped 18-8.25 on third attempt that Natalie was chasing someone.

Into the finals they went and just like her teammate, Natalie waited until the end to show her strength. On her fifth attempt she took over the lead with a 19-1.25 mark and never looked back. She did however more forward once more on her final attempt where she was able to jump 19-4 to secure the state title.

Both of these girls have jumped well the past two years but in their first indoor state competition they put on a show, looked, and acted like the champions that they are.