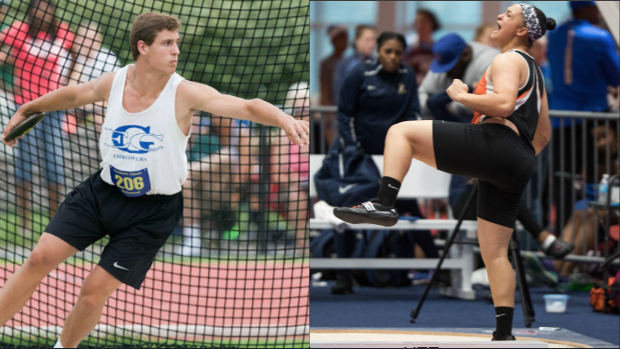 This winter we ran a feature piece on the very Talented and many time state champion, Alexis Clark. Though her specialty is in the shot put she is also a great discus thrower and potentially one of the best ever in our state all-around in the throwing events.

Virginia has had some great throwers and still does, few have been as consistently great as Alexis Clark has been. On the guys' side her closest counterpart would definitely be discus specialist Matthew Zajac who was the 2014 MileStat Athlete of The Year. That got us thinking about how and what if we compared two all-time greats.

Alexis ranks third all-time in the shot indoors and 15th all-time for the discus. Zajac on the other hand is the state record holder in the discus and 18th all-time indoors in the shot put. The biggest similarity though for the two is their respective progression throughout high school.

Zajac threw 174-11 as a freshman and is the freshman, sophomore, and senior class record holder for VA. He also is the state record holder for the discus having thrown 203-9. Clark also showed strength from day one with her 42-3 freshman best and hasn't looked back since.

Using those equations the data says Alexis Clark is clearly the better thrower between the two. Though data says that, our gut may have to go with Zajac considering he holds a state record. Clark of course has one season remaining and quite a few chances to get that record too.

Sometimes it is only in hindsight when you can see how great an athlete is or was. That was the case this indoor season when we looked back at Alexis' high school career. Year after year she was above and beyond the best and that continued success is almost more impressive than the marks themselves.

Only time will tell though where we rank her and other strong competitors like Jabari Bennett, Ebonie Whitted, and many others in VA.