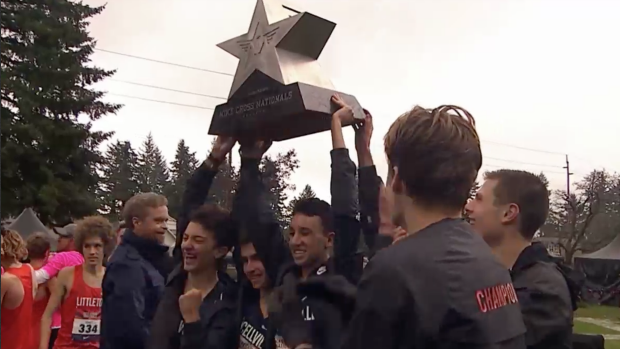 PORTLAND, OR. - The Vikings of Loudoun Valley are national champions once again. Saturday, out at NXN, they became the first program in NXN history to win a second team title. They also were the first to ever win back-to-back titles and broke their previous record score in the process. They scored 77 points to break their previous record by over 10 points with Great Oak (CA) second and Littleton (OH) third.

Stepping up onto the podium the Valley guys looked nervous. They knew they ran well but both second, third, and fourth for that matter also ran superb also. Not to mention that Valley sat in second at the Mile mark and third at two miles based on raw scoring. Once you take out the non-scorers though you can see how Valley dominated the entire race.

That final stretch though was where the race was won with Valley picking off runner after runner. Just like how they ran all season, this race was about finishing the right way and that is exactly what they did.

Shultz, Hasle, and Barreto are all juniors. They will try and be back next year with teammates Taylor Ney and Kevin Carlson. Though they do lose a lot of their speed, it should be noted that all five of these returners have run 15:56 or faster already.