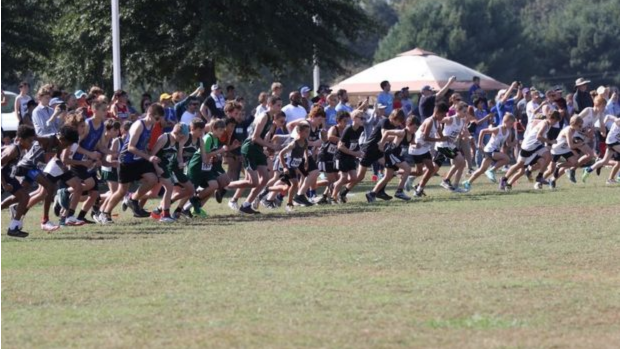 We are just now hours away from the third annual Middle School State XC Championships. We couldn't be more excited for this meet's return to normalcy with both individual and team champions to be crowned.

So far entered are over 580 athletes from over 56 teams from all over the state. Highlighting these teams are some who on paper look to be favorites this Sunday at Pole Green.

On the girls side we have Christiansburg, Rappahnnock Ospreys, Western Albemarle, and Blacksburg. Christiansburg took home the victory early in the season at Knights Crossing, the meet's first and biggest qualifier while Blacksburg took a decent third place there. More recently Western Albemarle (Crozet Crew) won the MileStat.com XC Invite with Rappahannock Ospreys taking second.

With five scoring athletes and a tie-breaker of a 6th and 7th runner, this means Sunday will be a true team effort. Expect this one to be very close with four strong teams battling individually and as a team.

Over on the boys side of things it looks to be a rematch of the early season monster-meet The Knights Crossing. This weekend will be the second crossing between Jefferson Forest and Blacksburg who went 1-2 back in September. Forest also tallied up a victory at Central VA (FUMA) to make them look just that much better heading into Sunday.

Forest and Blacksburg will also face off with each other at high school states this year so it makes it just that more exciting. Individually things should be exciting as well with 12 of the top 15 boys in the state entered and the same 12 out of the top 15 on the girls side. This doesn't even incorporate the fact that many of the others in the top 50 have yet to run on a fast course meaning this race is going to be fast top to bottom!

Leading the way on the boys side is Forest's Macon Smith who has run 13:38 on the season and leads the state of Virginia this year at the 4K distance. He will have a good shot at the course and state meet record of 13:13 run last year.

On top of that you should keep an eye on Campbell Howard of James River Day School, William Zealand of Pacers, and Asher Green of St. Chris who have all run sub 14:30 this season already.

Over on the girls side Emma Schmitz and Chrysanthi Euripides both lead on paper with their VA #2 times of 15:20 but Keira Arenholz enters as the top returner and VA #2 all-time at the 4K distance. She was out-leaned at the line last year by Kerrigan Chaney 14:41.6 to 14:41.7.

These three ladies plus Ellie Harlow, Kiera Lowman, and Iyndia Bey all enter the meet with a best under 16 minutes.

In either race, if the winner wants that record they will need to chase it from the start and hopefully that is what they do with great weather slated for the weekend.