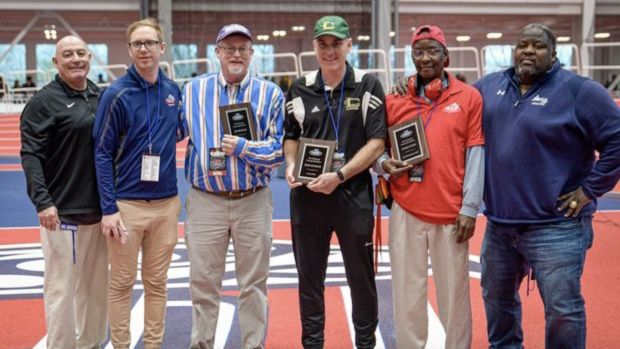 VIRGINIA BEACH, Va. - The VA Showcase selection committee has announced the three honorary meet referees for the 2022 VA Showcase. Each year one coach, one official, and one supporter is selected. All three individuals have supported the VA Showcase over the years in multiple roles and have been integral in making it the biggest and best meet in the nation.

Below is the announcement from meet management:

Coach King exemplifies what it means to be a track coach. Sometimes you're at a meet coaching and you just need to pick up a flag or rake and help the meet happen. Dan has been that guy from day one (for those that remember, that was Friday the 13th, 2017). He was quick to help the move and without his help, we would not be the meet we are today.

Coach King's athletes have done well at the VA Showcase and have attended multiple years. Dan himself has been to almost every meet and annually helps behind the scenes preparing the quick transitions from event to event.

Tree, as many of the officials know him as, is another person that has been integral to the success of the event. From helping his schools attend the meet - no matter the weather - to officiating the meet in any position needed.

Not only is Greg helping at the meet itself but annually he is also helping out at Boo Williams this weekend which frees up the best officials to help officiate the VA Showcase. He is one of the most experienced, trusted, and fun officials to work with. Him being a part of our event is part of the reason it is such a fun and great meet.

We could pay him in Pepsis but his worth to the meet is more than all the Pepsis in the world.

Delegate Hayes has been a part of the VA Showcase from day one as well. At first his daughter, Felecia Hayes (Grassfield-William & Mary) was a competitor and later he helped with photography and even passing legislation to honor the event in the Virginia House of Delegates.

Most importantly, Delegate Hayes connected meet management with folks in Virginia Beach back when this track was just some lines on paper. He is the singular reason we are here today. Check out more of what he is doing for the sport and region on his website, CliffHayes.com.