All photos by Paul Merca (paulmerca.blogspot.com) 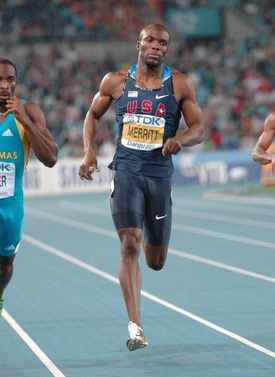 After missing 21 months due to a drug suspension, Lashawn Merritt has stormed quickly back onto the World Stage showing little rust as he ended up as runner-up at the World Championships. Merritt had rolled through the first two rounds winning his heats in the prelims and semi-finals, but was caught at the line by an 18 year old from Grenada in the finals for the gold medal. Nonetheless, an impressive comeback for Merritt (2nd in finals with a 44.63 clocking) missing almost a full two years of competition and have limited racing opportunities to prep for the World Championships. With his old rival and 2004 Olympic champion Jeremy Wariner dealing with injury and his window closing, Merritt has to wait and see if he will have the opportunity to go for his second Olympic gold medal in 2012. The United States Olympic Committee is currently challenging the International Olympic Committee's ban on Merritt from competing in the London Games due to a fairly recently rule put in place in 2008 which applies to Merritt after his suspension of more than 6 months. (Read article for more).

Another Hampton Roads product excelling at the IAAF World Championships was former Bethel High School and Hampton University star Francena McCorory. McCorory just missed a medal in the finals of the 400 meter dash as the fourth place finisher with a 50.45 clocking. McCorory had posted a time of 50.24 in winning her semi-final heat, which happened to be the third place bronze medalist's time in the finals. McCorory gained valuable experience in Daegu competing through the rounds, which hopefully she will be able to use next summer in London if she were able to make the US Olympic team. The US indoor high school record holder at 400 meters is not done competing in South Korea as she expected to run a leg on the United States 4x400 meter relay along with Allyson Felix, who finished second in the 400 finals with a sub 50 second clocking.

Queen Harrison was on the outside looking in after the women's 400 meter hurdles semi-finals as the product of Hermitage High School and Virginia Tech placed fourth in her heat with a 55.44 clocking, which made it tough for her to crack into the finals as one of the two qualifiers on time after the top two automatic qualifiers by place in each semi-final heat. Harrison, an Olympian in the 2008 Beijing Games, will be looking to get over the hump and reach her first finals in a championship meet on the World stage next summer in the London Olympics if she makes the U.S. team. Harrison was the youngest member of the Olympic team in 2008 when she was a surprise qualifier while still attending Virginia Tech. 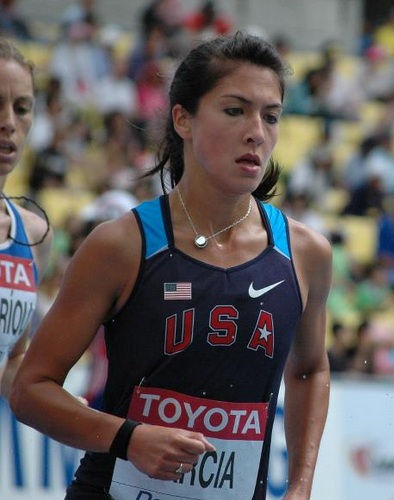 Not far removed from competing in her final track meet for the University of Virginia at the NCAA Outdoor Championshps in Iowa earlier this summer, Broad Run High School alum Stephanie Garcia was now wearing the Team USA singlet instead in Daegu at the IAAF World Championships. Competing in her first world championships now as a post-collegiate athlete, Garcia placed 7th in her first round heat of the women's 3000 meter steeplechase with a performance of 9:53.47. Garcia has made a remarkable jump in development since her high school days at Broad Run with PR's of 5:09 in the 1600 meter run and 11:16 in the 3200 meter run as a prep distance runner.

Kathy Newberry, a 1996 graduate of Lake Braddock High School and former women's cross country coach at Wiliam & Mary, is still competing a high level at age 34 as she represented the USA in the marathon at the World Championships. Newberry finished 30th in the 26.2 mile race in Daegu with a time of 2:37.28 as she was the second finisher of five runners for the United States.

Live online video feed and on-demand race footage can be found at universalsports.com.